"I wasn’t very good naturally at all. I had no GAA background, I had to start from scratch."

In all of Ireland's Six Nations title wins over the past five years, writes Philip Dillon, the kick-chase and high ball reception have been key factors. Often used as a defensive tactic or a way to get the ball back in the opposition hands, and half, to force a penalty, kicking has evolved into an even greater attacking weapon.

As evidenced against France and England during the 2018 Grand Slam-winning campaign, Ireland made hay with a smart and attack-focused kicking game. New Zealand and Australia have taken this on a step further over the past 12 months and have taken a leaf out of the Crusaders' play-book (who often kicked out of hand 30+ times per game on their way to another Super Rugby win).

Indeed, England's kicking strategy did damage untold to Ireland and France in their opening two games in the 2019 Guinness Six Nations. Combine the crossfield kicks with smart grubbers and dinks and, all of a sudden, the hard press may not press so hard any more.

On Baz & Andrew's House of Rugby [from 18:00 below] Andrew Trimble discussed the evolution of the kicking game, and high ball reception, with Barry Murphy and Jerry Flannery. 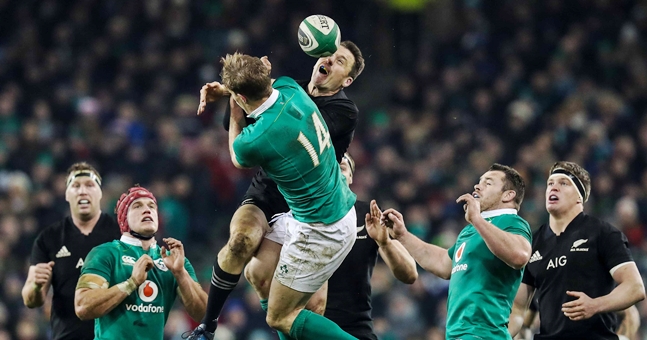 Trimble has recalled, in the past, how high takes were a serious work-on in his first few seasons with Ulster and Ireland. When Tommy Bowe moved from Ulster to Ospreys in 2008, Trimble remembers how his former teammate was advising Gavin Henson to target him with high bombs.

"I couldn’t even get into the air to catch it," he admitted.

"It used to just freak me out especially if the ball isn’t flying perfectly end-over-end you can judge where it is going to land. If the ball was ever not struck properly, you’d have to try get into the air and it was carnage. Back in those days no one would go up in the air to compete, I used to just stand, try use my footwork and hope it wasn’t that accurate and there wasn’t a Dan Biggar to pluck it out over my head." 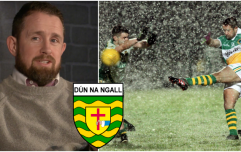 'GAA was a sport I knew very little about, but I knew the people that played it were f***ing nuts'

END_OF_DOCUMENT_TOKEN_TO_BE_REPLACED

Any experience in GAA could have been beneficial when teams started to employ this tactic in rugby emerged, but Trimble never had the pleasure. It is such a crucial part of GAA to have the ability to out-jump your marker from kick outs.

Trimble set to the task of improving his aerial game and, in time, would become one of the country's best high ball fielders. He gave an interesting insight into how Joe Schmidt wanted him to approach high ball situations tactically. The Kiwi did not ask him to change his approach too much, but his tactics were advanced for a modern style of play and different to others Trimble had followed in his career to that point.

"I’m not sure if he took me aside and said it to me personally but it was becoming a more common part of the game along with someone chasing their own kick and getting up to make it in the air. It sounds obvious now that you'd be able to compete for a contestable ball, it wasn't for long periods.

"When I first came through in the first three or four years that didn't really happen. If I was chasing a kick, I would wait for him to catch it and try and nail him into touch. It is strange that they were the tactics but when Joe arrived everything changed. I just picked it up and rehearsed it over and over and got quite good at it."

He certainly did and, in Rob Kearney, Keith Earls, Jacob Stockdale and Andrew Trimble, Ireland have players that have followed in Trimble's leaps and bounds.

And, in terms of utilising the kicks in behind the high press, Ireland can turn to the likes of Johnny Sexton, Joey Carbery, Garry Ringrose and Earls (again), who are all adept at that particular skill.


popular
The SportsJOE 12 o'clock quiz | Day 69
SportsJOE 2000s Football Quiz | Round 1
"I went up to the hotel, got attacked in the room and told I'm no longer Tipperary captain"
The SportsJOE 12 o'clock quiz | Day 67
QUIZ: Name these footballers based on their former teammates
QUIZ: Name the footballers to have played for Manchester United & Real Madrid
QUIZ: Name every All-Ireland football winner of the last 33 years?
You may also like
2 days ago
Baz & Andrew's House of Rugby - Tadhg Beirne and John Cooney
4 days ago
'We knew how much it meant to them' - Conrad Smith on Croke Park history lesson
4 days ago
"I was like, 'Your ribs will be broke, alright, if I get my hands on you again!'"
5 days ago
Baz & Andrew's House of Rugby - Mike Brown on past battles with Ireland
5 days ago
Online media excluded from another important IRFU briefing
6 days ago
"Just to clarify, it was an accident" - Mike Brown on Conor Murray incident
Next Page