It was only 11 months ago when Brendan Maher suffered the toughest blow of his career.

It wouldn't be like the Borrisoleigh club man to stand off though and with his county's life on the line, he made a brave lunge to try and stop Collins and Clare in their tracks.

Snap. Cruciate gone. Bang, back of the net.

For a competitor like Maher, the concession of that crucial goal will have hurt harder there and then but for a 29-year-old with so much hurling done, the dreaded knee injury brought even more worrying repercussions.

Surgery. A winter's rehab. Gym walls and one legged squats.

The smell of summer grass was a long way away but Tipp's most recent All-Ireland winning captain put the head down. 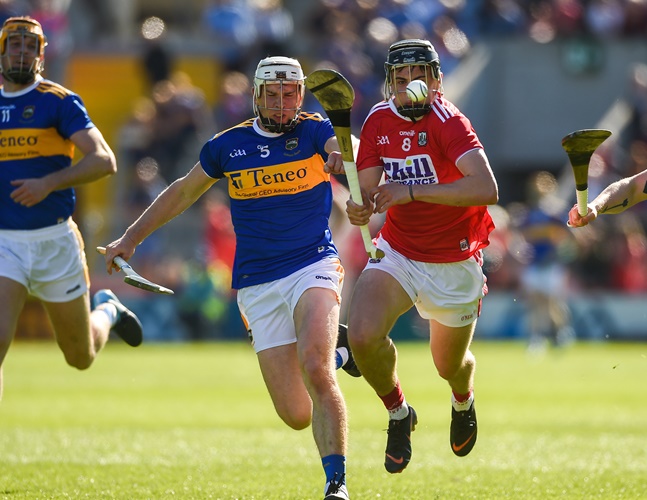 He did all the stretching and strength work you could imagine and looking on at Tipperary's League campaign from the sidelines, he had tunnel vision.

Got down to business with Borrisoleigh. They played their first round of the county championship on the second weekend in April and against no lesser opponent than the reigning county champs Clonoulty Rossmore, Maher stepped up with a colossal performance.

END_OF_DOCUMENT_TOKEN_TO_BE_REPLACED

He was seen arguing with the ref after Borris had won. The hard edge, the hunger. It hadn't gone anywhere you know.

The blue and gold had teetered in the League but this was D-day.

They'd been missing a man then anyway so this was a moment of truth. And by God did Tipperary put it right.

Hurling unlike they'd done since the summer of 2016, John O'Dwyer did what everybody within the Premier County knows he can. Seamie Callanan put his doubters to bed with a sharp performance that will go down for his 1-4 but was defined by his hooks and relentless chasing.

John and Noel McGrath were tuned in, Cathal Barrett was like a revved up mean machine. Paudie was solid as ever and Ronan delivered.

It all came back to Brendan Maher though. Cork weren't as lifeless as many will have you believe out there and when they were purring in the second half, it was Tipp's number five, in his first game back, who was saying not today.

He caught puck-outs, he bursted onto breaks and he drove Tipperary on.

For any half forward line, the sight of your opposing half-back scoring from play is a real spirit breaker, Maher managed two of the finest.

His last one was rightly dubbed by Michael Duignan as the score of the day.

Brendan Maher fires over an inspirational point for Tipperary. pic.twitter.com/eOwvjMmbOE

Brendan Maher was magnificent. Tipperary will have a say yet.

popular
QUIZ: Can you name all 24 champions of the English football league?
QUIZ: Name the countries these World Cup footballers play for
One of the UFC's most hyped prospects admits to copying Conor McGregor
The SportsJOE 12 o'clock quiz | Day 77
The SportsJOE 12 o'clock quiz | Day 75
SportsJOE 2000s Football Quiz | Round 4
The SportsJOE 12 o'clock quiz | Day 76
You may also like
1 week ago
"I knew I didn't have the pace or strength, it was just get it and try kick it left or right"
2 weeks ago
"You had no other choice but to get down and dirty with these boys"
1 month ago
"It never crosses my mind that I lifted it on the pitch rather than on the stand"
1 month ago
GAA Hour | Tipperary v Galway 2001 All-Ireland hurling final
2 months ago
We give you the All-Ireland hurling final, you tell us the man-of-the-match
2 months ago
Even injury couldn't hold Richie Power's genius back
Next Page