Liam Silke has scored 5-5 for Corofin this year.

Liam Silke wears number 4 on his back.

It's the type of return that would be unheard of from an inside back-man in years gone by, but with football changing and with the Corofin man well able to take his chances, he's become one of the club game's most prolific players.

A corner back as an attacking weapon, how has that happened?

Corofin for one, haven't just embraced the game's changes, they've made their own tweaks to it too.

The traditional idea of taking your position and staying there has been thrown out the window by the Galway club, who allow every player to roam - just as long as they're able to make the ground back.

What this kind of style demands is an incredible level of fitness and stamina - and Liam Silke - their stealthy corner back has a serious engine and a quick brain.

You can see Liam Silke escaping the Ballintubber cover at the very start of this clip.

It's what makes @CorofinGAA that they can create opportunities like this one...

It's what sets them apart that they can execute them to pure perfection 👌pic.twitter.com/PuoAfJx5x8

He knows when to go and when to call, that's why you'll see him popping in acres behind the opposition's last line. He knows how to finish too, and that's why he has five goals to his name.

END_OF_DOCUMENT_TOKEN_TO_BE_REPLACED

"Previously, in seasons gone by, I would have gotten goal chances and I wouldn't have taken them, so it definitely has been something I've worked on," said Silke on Thursday's GAA Hour Show.

Silke has put the work in, and he's gotten the rewards.

"I'm up in UCD where there wouldn't be a lot of players around, so I could just go out with a few balls by myself and practice it...It definitely takes practice, I'm not sure I've done enough to reap the rewards of this year so far, it's just been a lucky year so far.

"I wouldn't have expected to get that sort of return, it's just been a good year so far..." 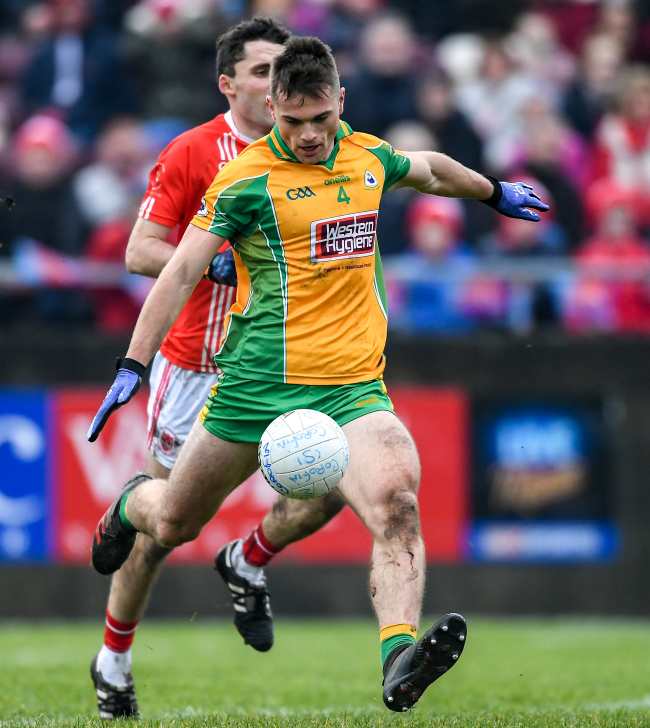 "I'd rather not be there...I dislike corner back, but it's just about going out and doing the best for the team," he laughs when asked about his corner back exploits, but Silke is keeping forward's quiet by giving them something to worry about - rather than the other way around..."

"As any forward will say, the last thing you want to be doing is running back after a forward or a player. With Corofin, it helps me that we've such a strong team and that we dominate possession - if it was the other way around, I'd be the one running around after a player.

"It's not like it would translate to the inter-county game, where there would be strong players everywhere, it wouldn't be as easy get forward from the corner back position..."

As for his own situation, Silke is one of the busiest GAA players around. As well as studying medicine up in UCD, he has club and county commitments on the other side of the country in Galway, but he maintains that it's doable once players get the balance right.

"There isn't that many players doing as much travelling as me. I wouldn't go back midweek every week, because half the day would be gone. It's up to each player and the managers to see what's best for them - thankfully, I've had understanding managers for the past two and a half years...It's down to the time of the year too - I'm only back a few weeks now so I can prioritise the football at the moment..."

All-Ireland final week with your club in the middle of it all, where else would you rather be? Silke and Corofin are lapping this up.

"We need to try not to think too far ahead, we need to focus on this one game..."

You can watch the most recent episode of The GAA Hour Show here.


popular
The SportsJOE 12 o'clock quiz | Day 69
SportsJOE 2000s Football Quiz | Round 1
The SportsJOE 12 o'clock quiz | Day 67
"I went up to the hotel, got attacked in the room and told I'm no longer Tipperary captain"
QUIZ: Name these footballers based on their former teammates
QUIZ: Name the footballers to have played for Manchester United & Real Madrid
"I knew I didn't have the pace or strength, it was just get it and try kick it left or right"

You may also like
3 days ago
"That's done at the end of a sprint, jumping off one leg" - Kevin Feely on the art of fetching
1 week ago
“Talent wise he’s as good as there has ever been in Gaelic football"
1 week ago
"You had no other choice but to get down and dirty with these boys"
1 week ago
"My fondest memory is definitely beating the Dubs in Parnell Park, that's just f*cking brilliant"
2 weeks ago
JJ Delaney tribute: A hurling legend made of different stuff
1 month ago
Arsenal S and C coach on how to keep it ticking over during the lay-off
Next Page