It's hard to believe that for a long time, All-Irelands were a far-fetched dream for Dublin.

As a confident youngster, Alan Brogan didn't see it that way. In college, he told Colm Parkinson that he had no worries about winning an All-Ireland because "Dublin have won an All-Ireland in every single decade since the GAA began, so why would my era be any different?"

But as Laois and then Westmeath beat the Dubs in Leinster finals, this youthful confidence began to drain. Dublin did break their Leinster duck under Tommy Lyons in 2005 but too often and for too long, they would struggle against the big hitters in the real business stages of the championship.

Armagh were too far ahead, Tyrone were too good and Kerry, Kerry didn't worry that much about Dublin.

"Alan was the man that you had to stop, he was very courageous in that he always wanted the ball," said Parkinson on another brilliant Laochra Gael episode.

"Alan became the poster boy for playing well in these glorious failings, he was the one player that didn't let Dublin down even though lots of other players went hiding..."

There were false dawns and lots of them. Beating Tyrone in the 'Battle of Omagh' was seen as a huge scalp for Dublin in the League in 2006 but despite the psychological edge gained from this and indeed, from standing their ground in Hill-Gate, when Mayo warmed up in front of the hill, the men from Connacht had Dublin's measure in the championship.

And while Dublin attempted to mix it physically with these teams, Alan Brogan was often held back by his protective manager Paul 'Pillar' Caffrey. In the Battle of Omagh, Caffrey was seen escorting Brogan from the Holy row that broke out on the sideline.

"I was looking at Alan, Alan was as one of my lovers, not my fighters," he laughs. 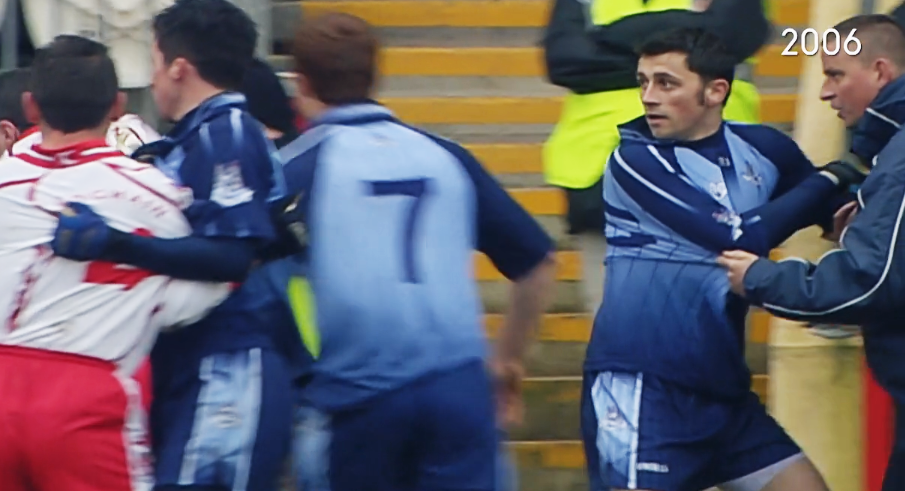 END_OF_DOCUMENT_TOKEN_TO_BE_REPLACED

The brilliant TG4 Laochra Gael doc then moves onto their first big championship scalp in 2010, with the younger Brogan brother Bernard beginning to make his presence felt.

Cork knocked Dublin out in the semi that year, but the big breakthrough wasn't far away and it arrived in 2011 with both Brogans playing central roles.

That was relief, elation all in one but as that kick-started Dublin's current era of dominance, an ageing Brogan was being used and less and less by new manager Jim Gavin.

He did have his fairytale ending in the 2015 final though, when moments after coming off the bench, he kicked a wondrous score off his left foot into Hill 16 to seal another All-Ireland for Dublin.

"I'd spent hours and hours honing my left foot with my dad when we were young, I suppose all those hours of practice all came home to roost"

That would be his final score in blue.

Alan Brogan's Laochra Gael, Tuesday night at at 5.30, not to be missed.


popular
Freak injury forces Robert Whittaker to abandon title defence fight at UFC 234
The top 10 fastest knockouts in UFC history
"We did find him hours later and we made up." - How Flynn and his best friend came to blows in Croke Park
The SportsJOE 12 o'clock quiz | Day 333
"Munster was like playing for your local GAA club. The craic was 90"
Michael Bisping tears into Dillon Danis for 'trying to be Conor McGregor so hard'
If ever a player would inspire you, it's Kildare's Mary Hulgraine
You may also like
1 month ago
"The GAA need to be more aggressive. They need to pull some of this back"
1 month ago
Night to remember for Mackin at TG4 Ladies football All-Stars
1 month ago
"Hang on lads, there is more to life outside of Dublin" - Connellan is a rebel with a cause
1 month ago
"People that get All-Stars aren't just a cog in the wheel. These are the special, outstanding players"
1 month ago
"It's just a really hard thing to step away from" - camaraderie keeps pulling Davey back in
1 month ago
De Búrca keeping positive as Fenton and Hegarty are the top dogs
Next Page