Jack O'Shea never forgot the dreams he used have.

Following out the band, standing for the parade, playing in an All-Ireland final. The stuff of fantasy.

He won seven of them by the end of a decorated career but all the way through he never once forgot how lucky he was.

And while some players would be crippled by the pressure that comes with All-Ireland final hype and build-up, the man from Cahersiveen relished every moment of it.

The training ramping up, the hype building, the journey to Dublin. This was what he dreamed about and he was sure as hell going to soak it all in. The night before he'd go to bed late, the morning after he'd be one of the first Kerry men up.

The 61-year-old told all about his unique pre All-Ireland final routine on Thursday night's GAA Hour live from Liberty Hall.

"Individuals are all different. I used to play Pitch 'n' Putt the Sunday morning of the All-Ireland. That's how I'd spend my morning leading up to the All-Ireland," he said to huge laughter from the crowd.

"Every All-Ireland final I played in, I played 18 holes of pitch 'n' putt on the Sunday morning" - Jack O'Shea 😂 pic.twitter.com/hp64A33SIS 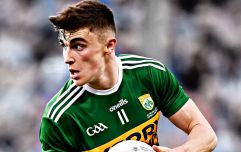 END_OF_DOCUMENT_TOKEN_TO_BE_REPLACED

"Every All-Ireland final I played in, I played Pitch 'n' Putt that morning. I'd be one of the last to go to bed, I'd be the first up and I'd go down to Malahide and play 18 holes of Pitch 'n' Putt. A couple of the subs would come with me. Drive my own car back to Croke Park then and watch the first half of the minor match. I'd come back and have a sandwich and then back into the dressing room. I loved the dressing room, I loved the whole thing..."

"We were fortunate enough, I'll put it to you this way. On Sunday, 30 people will go out behind the Artane band. That's the ambition of any young kid, any Gaelic footballer. That is unique.

"If you were down in Kerry, you'd have no chance of winning an All-Ireland, you're up in Dublin - you have a chance. That's where county players want to be. That's unique, that sensation never leaves you..."

You can listen to the GAA Hour live at Liberty Hall here.

popular
"They don't care about mistakes once they're honest mistakes" - Buzz back for Bennett
The Ultimate Diego Maradona Quiz
Sky Sports pundit calls out Katie Taylor during live broadcast
The SportsJOE 12 o'clock quiz | Day 249
Caelan Doris backed for Lions despite England's expected Test XV domination
Jose Mourinho leads tributes to 'Don Diego' as the world says thanks to Maradona
The SportsJOE 12 o'clock quiz | Day 248
You may also like
1 month ago
No victory speech for Clifford as Cavan drop down the Leagues
1 month ago
"There’s nothing to state ‘lucky winner.' An All-Ireland medal is an All-Ireland medal"
1 month ago
Marc Ó Sé: Split the season, give Tony Brosnan his Kerry chance
2 months ago
Club championship just won't be the same without Tony Brosnan
3 months ago
"Even on player's bad days, you were very kind" - Seán Óg sums up O Muircheartaigh's magic
5 months ago
"I don't think forwards like when you play that half a yard in front"
Next Page