Ever since Eanna Murphy made a name for himself as Galway's number one, distribution has been his forte. Low, drilled and pinpointed puck-outs are the name of the modern game and in terms of delivery men, Murphy is one of the most prolific around.

Against Limerick, all power, strength and as high as the Eifel Tower - especially in the half-back line - a precise puck-out was always going to be a key part of Shane O'Neill's plan. It made sense to try and keep the ball away from a famously economical Limerick and it made sense too to play to Galway's strengths - first touch and skill.

But this by its very nature, is a game based on danger. The zip has to be spot on, the handling must be faultless. Even at that, there's always a risk that an opposing player will get a hurl in or a flick on and so if you play with fire, you must be willing to get burned.

For the majority of the first half, Galway were standing outside the blaze and looking in. An overcooked early restart went high and out for a side-line but Padraic Mannion collected more than went astray, and when it was good, it was good. A couple of hairy moments but it's harsh to blame a goalkeeper, when the man calling for the ball is let down by his first touch. Galway's outfielders were too sloppy on more than one occasion in that first half. 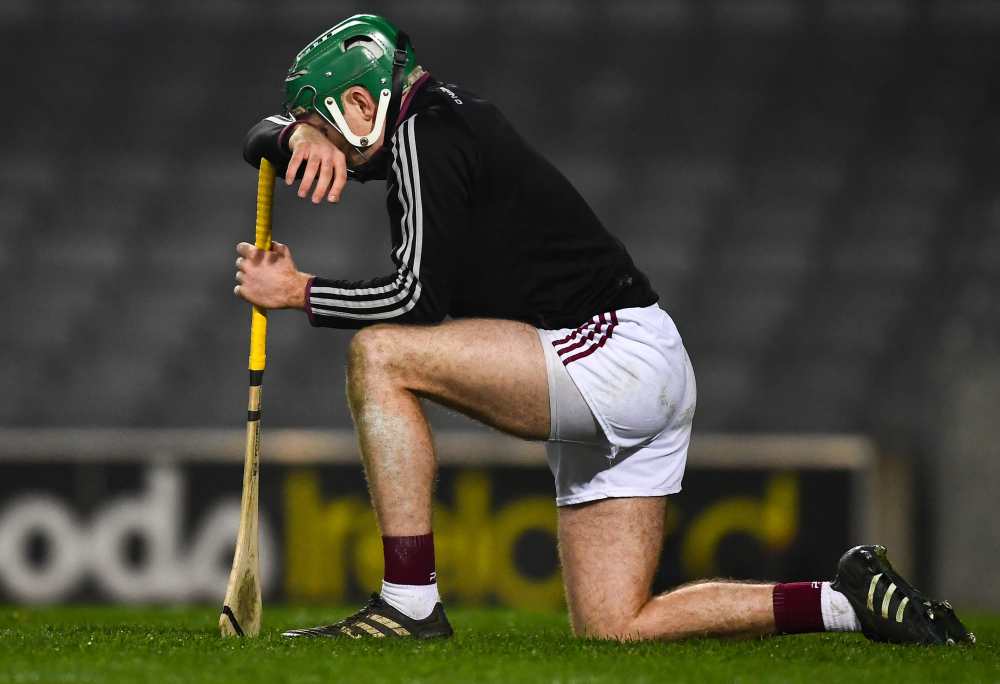 Éanna Murphy was visibly dejected after the game. Sportsfile.

In fact, a 15th minute lapse by the Tommy Larkins man was the biggest blot on his copybook, and a sharper Graeme Mulcahy would have made him pay the price. But Murphy is human just like his namesake Eoin - one of the game's greatest ever goalkeepers - who made a similar error from the same place last night. The Galway keeper got away with what was a poor piece of play, but mistakes happen, especially in this high voltage zone.

All you've to do is look at Limerick. Usually the masters of this short-passing, fast moving operation, on Sunday, the Treaty resorted to uncustomary 50:50 balls because they were had no other option, forced into it by a ravenous Galway work-rate.

As the second half rolled on, the puck-outs became dicier and dicier and Galway's handling became scrappier. Perhaps this is where the Tribesmen went wrong. In previous games, they backed their big half forward line to win the ball but here it was too concise.

END_OF_DOCUMENT_TOKEN_TO_BE_REPLACED

At this stage, Nicky Quaid was lumping his long but puck-outs we must remember are for the most part a planned thing hinging on a message from management, so it's jumping the gun to blame Murphy, when your're not privvy to the message from the line.

The other side of a goalkeeper's game is shot-stopping and the 22-year-old kept Galway in the game with a good save from Seamus Flanagan in the first half, another double save in the second and this stop from David Reidy.

David Reidy thought he had won it only for Eanna Murphy to make an unbelievable save
Live now on @rte2 and @rteplayer #rtegaa https://t.co/11LVxKXfNT pic.twitter.com/h1DGqVmFTc

The second last puck-out of the night was a real matter of frustration for Galway supporters but Murphy had just hit a decent pass, only for Sean Loftus to misjudge its flight.

One thing he will regret is going down like he had a back spasm after a tip from Aaron Gillane in the first half but you live and you learn.

Puck-outs are a goalie's day-job but they're a team effort. Limerick won more of Galway's than they should have, but you can't lay all of that at one man's door.


popular
Referee Mathieu Raynal puts Sexton in his place after TMO mess
Sexton compares "brilliant" Irish debutant Craig Casey to Jonny Wilkinson
Tadhg Beirne now delivering what so many of us knew he was capable of
The SportsJOE 12 o'clock quiz | Day 308
Will Connors locks down No.7 jersey with two rapid succession plays
"I was like, ‘My ear is hanging off my head. Can you not see that?!'"
Owen Farrell rages at referee Pascal Gauzere as Wales catch England sleeping
You may also like
1 month ago
"I did for one second think of flinging the boot at him" - Maher's journey an inspirational thing
1 month ago
Limerick dominate All Star nominations with fair Hurler of the Year spread
2 months ago
"Outstanding refereeing" - courageous ref praised after under-20 final
2 months ago
Galway beat Dublin to win the U20 All-Ireland 315 days later
2 months ago
You may write the weekend off with no fewer than 11 GAA games LIVE on TV
2 months ago
"There's no nonsense with this team, they're just going out there and playing the game"
Next Page