"Joe was an expert on periodic brilliance."

Joe Canning made his breakthrough into the Galway senior hurling panel when he was 19 but it wasn't always easy, nor rosy.

END_OF_DOCUMENT_TOKEN_TO_BE_REPLACED

Séamus, Frank, Davy, Ollie, Ivan, Deirdre and Joe Canning are right up there with the most successful GAA siblings in the history of the game. They come from good hurling stock and they are, in and of themselves, good hurling stock.

Joe made his debut for the Portumna senior side, in 2004, at the age of 15. Within a year, he was lashing home 1-11 in the county final and taking home his first senior winners' medal. By then, he had already won two All-Ireland minor titles with Galway.

As early as 2006, there were calls for Canning to be pitched in with the Galway hurlers but he opted to concentrate on underage and club duties until 2008. Loughnane, who had already been in the post a year at that stage, shared some wonderful recollections of Canning during The GAA Hour: Live from Ennis [from 38:00 below]. 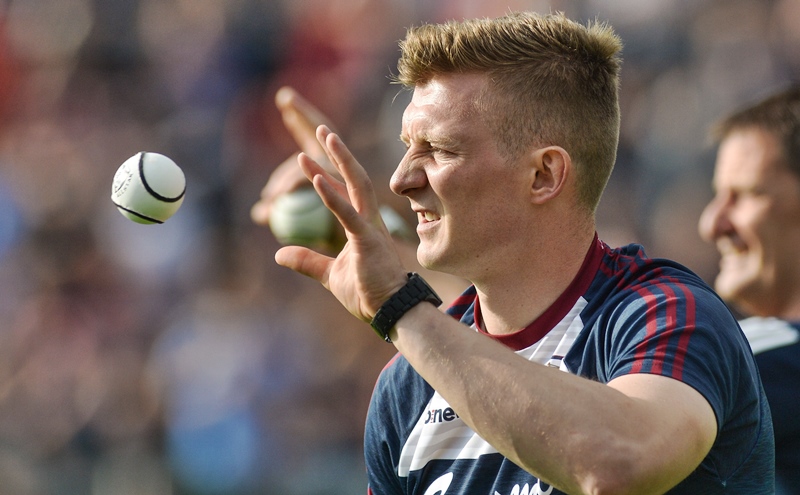 END_OF_DOCUMENT_TOKEN_TO_BE_REPLACED

Canning, during Loughnane's term, was not entirely happy with the set-up and told people that he was thinking of heading off travelling. The former Clare boss remarked that Canning only got as far, on his travels, as Limerick.

"That was probably accurate as well," Loughnane joked.

"I'll just say this about Joe - I saw him in 2008 as he was back the following year. I saw him doing the most astounding thing I've ever seen on a field. It will just tell you the skill he had when he wasn't half as fit as he is now.

"If you look at Joe then and now [you'd see that] even though he was brilliant in the year he came back. His best year was my last year there; his first year with Galway.

"He took on the whole Tipperary defence in the league final and buried the ball in the back of net. Then he beat Cork on his own in the championship.

"But I remember is one night, at training. Do you know the way you'd be pucking around and you'd have fellas trying it from the corner flag. They'd be out and trying to put the ball over the bar; bend it over...

"You'd walk down the hill from the changing room and onto the field. James Skehill would be there and there'd be laughing and joking, as Skehill and Joe are good friends. One of the lads might get it every now and then.

"Over comes Joe and he's nonchalantly walking, lifts the ball, has one look and BANG, over the bar. He keeps walking out the field but sure Skehill goes, 'Oh yeah, but you won't do it off your other side'.

"Joe says nothing but he turns back. The ball is at the corner flag. Up, one look, BANG... bends it over the bar. Everyone just stood there and looked. How could you do it? It would just tell you the skill that man has."

END_OF_DOCUMENT_TOKEN_TO_BE_REPLACED

That was over a decade now and Canning the 29-year-old, Loughnane believes, has improved and improved again from that precocious 18-year-old that had the senior panel dumb-founded with his effortless skill.

""Joe was an expert on periodic brilliance," said Loughnane. "He'd produce one thing that would take your breath away... but now he is a more rounded player. He's producing it every day."


popular
Owen Farrell praises Johnny Sexton in revealing interview ahead of Six Nations
Everton release brutal 59-word statement to confirm Anthony Gordon departure
British publication urges Gareth Southgate to claim Evan Ferguson for England
Two Ireland stars included in Premier League's 'young English XI'
Man United reportedly receive late bid for Harry Maguire from Inter Milan
Cristiano Ronaldo will return to Europe to end his career, Al Nassr manager confirms
The reason for João Cancelo’s shock Man City exit has been revealed
You may also like
6 months ago
Finian Hanley take on contentious Kerry free may settle some Galway arguments
6 months ago
Darran O'Sullivan on the post-match gesture that shows what Jack O'Connor means to Kerry
6 months ago
JJ Delaney on how Brian Cody kept him grounded after Hurler of the Year honour
6 months ago
"We were known as stab city, the butt of everything. Of all the things JP has done, he has made everyone so proud to be from Limerick"
6 months ago
McCarthy still harder than a brick wall
6 months ago
"He was getting a bit disillusioned" - How Damien Comer rediscovered his fire
Next Page