Keegan gets dragged out of centre back, Ger Cafferkey gets left with terrifying space in front of himself and Damien Comer.

Galway won both throw-ins against Mayo in the Connacht semi-final and, on both occasions, the ball was hit straight into their full forward.

It wasn't a high, aimless, hopeful kick in that general direction; it was a bouncing ball sitting up for Comer to run onto. It was a planned move and one which reaped rewards.

"Both throw-ins were knocked to Conroy and Conroy wins them and, immediately, he's shifting it off to Comer," Colm Parkinson explained on The GAA Hour.

"I'd love to see a camera behind the goals to see the movement of the Galway forwards to get Comer free. The first one, Comer was six or seven yards ahead of Cafferkey. That's a planned move. That is Conroy to Comer and Comer shooting and it's an early point.

"What I'd love to see is if there's a block move involved? Are all the players scattering out of Comer's way to give him all that space?"

Conroy wins and kicks straight away. 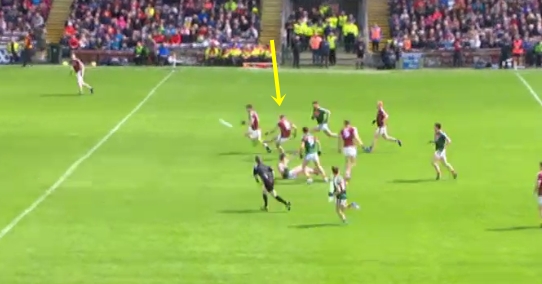 Comer collects and puts it over the bar. 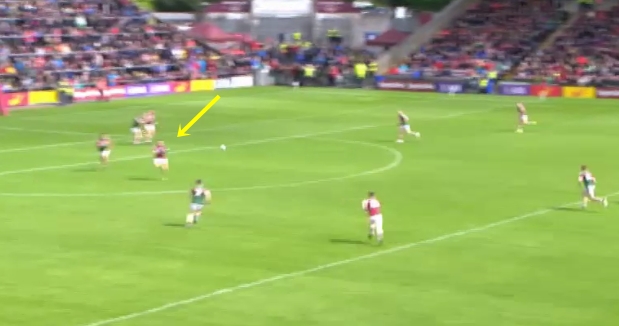 "Definitely whoever was playing centre half forward vacated that space," Cian Ward said.

"Everyone else was maybe holding their positions to create that space so Comer has a massive pocket.

"Comer is such a powerful man, he's quick as well - it's not too difficult to get him free. I'd say it was probably just a push in the chest, bang, and he's gone."

What happened was that Lee Keegan was assigned the role of marking Shane Walsh so Shane Walsh took him away from the heart of the Mayo defence. And he did it twice.

Conroy wins and kicks straight down the Mayo defence again. 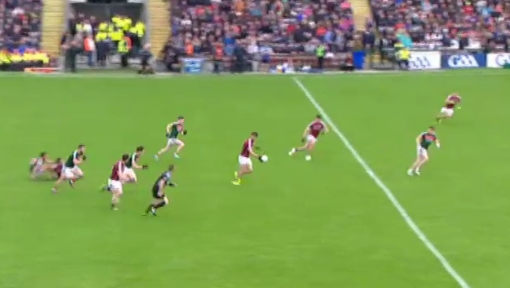 Comer collects, lays off for Michael Daly and it should be another score but it's a bad wide. 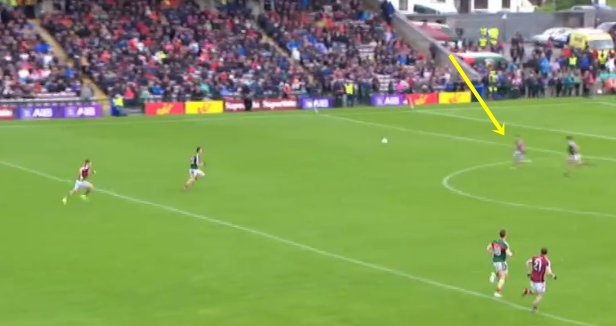 Lee Keegan was dragged into midfield by Walsh for the throw-in, leaving a big hole in the defence for Conroy to bounce one up for Comer. 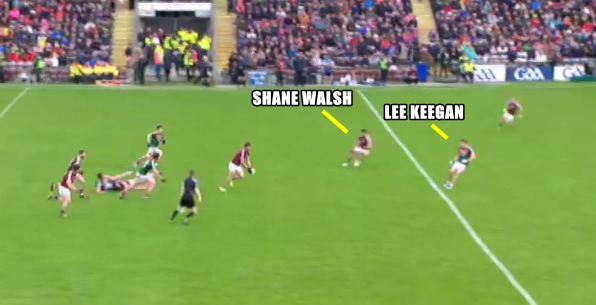 These type of set plays work but they're not used nearly enough.

"We used to have this set move from the throw-in and it was me or Ross [Munnelly] probably at wing forward," Parkinson explained about his Laois days under Liam Kearns.

"It was basically just everyone in the full forward line breaking out for the ball and I'm breaking across the field and then in."

Listen to the full discussion on training ground moves below from 55:00 or subscribe here on iTunes.


popular
Kilkenny youngster pulls off the no-look hand-pass once more
"Conor Murray was hung out to dry"
Jarlath Burns: The club man going to the top so he can bring it all back
Ben Askren on getting the opportunity of a life-time... after he retired
"Ireland don't ever do anything different and that's the worry" - Mike Tindall
Guinness Pro14 preview: Leinster v Glasgow
Superb TG4 documentary offers insight to lives of up-and-coming rugby players
You may also like
6 days ago
"Then we came along and we just won most competitions we were in"
1 week ago
The GAA Hour | Hurling | Numb hands, black cards and Kilkenny V Wexford
2 weeks ago
The GAA Hour | Football | Jonny Cooper interview and David Gough clarifies
2 weeks ago
Shane Walsh is ready to rule for Galway
3 weeks ago
The GAA Hour | Football | Dublin's third gear, division two bloodbath & Andy Moran positivity
3 weeks ago
The GAA Hour | Hurling | Limerick dominate Galway, Clare reshuffle & the art of hooking
Next Page