What a season of club hurling.

If it wasn't Brendan Maher scoring with a broken hurl, it was Tommy Walsh lighting up the nation with his passion. The club is where it's at, and the journeys of Tullaroan, Borris-Ileigh, Ballyhale and Slaughtneil showed the game's grass-roots off best.

It's not about the resources or even the population, it's about the love, the history, the culture and the passion. You can't buy that, it won't grow overnight, it will only come from deep within, from generation to generation and from stories and songs.

As it turned out, Kilkenny were yet again kings of the club game this year, with Conahy Shamrocks, Tullaroan and Ballyhale completing the clean sweep. Three small, rural parishes, it just goes to show you that a tight, united community is more powerful than a big one.

Tullaroan for example, had 500 of their 700 parishioners out cheering the team off the field on the Friday night before their All-Ireland intermediate win.  Their pitches were packed again, when the victorious team brought the cup home on the Sunday. That's priceless.

There were stars all over the place this year, from the junior to the intermediate to the senior grade and after plenty of debate, we've settled on our club team of the year. 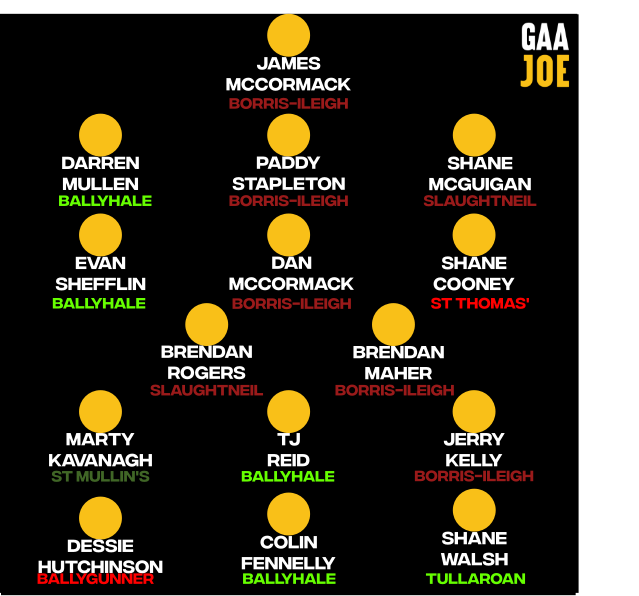 END_OF_DOCUMENT_TOKEN_TO_BE_REPLACED

As is always the case, there are some very unlucky omissions with young Tommy Walsh, Padraig Walsh and Martin Keoghan of Tullaroan heading the list. Seamus Burke was brilliant for the Borris-Ileigh while James Doyle of St Mullin's, Deccie Dalton of Fr O'Neill's and Chrissy McKaigue of Slaughtneil are also unlucky to miss out.


popular
The SportsJOE 12 o'clock quiz | Day 292
Conor McGregor wants immediate Dustin Poirier rematch, for UFC title
Looks like Rojo and Lingard are finally on the way out of Old Trafford
"It’s an easier life in goal, you’re not waiting for some fella to give you a box in the jaw"
Two uncapped players and some shock omissions as Ireland name Six Nations squad
Liverpool UFC star would fight black belt Manchester United striker Zlatan Ibrahimovic
Roy Keane story shows the power he had at Manchester United
You may also like
1 month ago
"The way Tipperary approached this game, I thought it was refreshing"
1 month ago
Cillian O'Connor the record-breaker as Tipperary fairytale ends
1 month ago
"I think the momentum we had gained helped us against Cork" - Christie agrees with Tailteann Cup
1 month ago
Pride of place brings tireless Christie back to the place he knows so well
2 months ago
"His consistency for Tipperary over the years has been phenomenal"
2 months ago
"He took the attention off himself straight away. He won't get the credit he deserves"
Next Page