The heavens have opened.

The pitches are soggy and the goalmouths are bogs. Training is a slog.

But you must count your lucky stars. Teams still standing are thin on the ground at this stage and believe it or not, every fallen group would love to be on their feet still.

It's been one of the wettest weeks of the year but hearts are warmed and minds are fuelled by the thoughts of Sunday's showdown. Every game is knockout at this stage, every knockout is huge.

You wouldn't think it, but these short days and dreary evenings are the pinnacle for club players. It's grim, but there's something magical about it.

Community pride. Untold stories. No matter where you are, you know the struggles, the highs and the lows. A fairytale will inspire you for next year.

Here are the potential fairytales around this weekend's corner.

The Commercials, with Quinlivan, Kennedy, Longergan, Fahey et al. are favourites to make it four titles in nine years. JK Brackens have claimed many a scalp on their way here though and will have plenty of confidence. 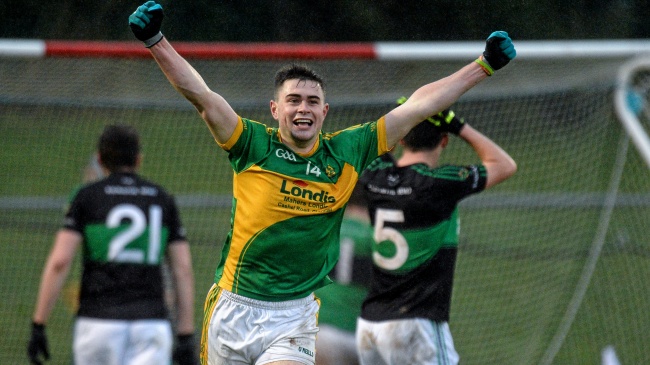 END_OF_DOCUMENT_TOKEN_TO_BE_REPLACED

The Templemore club won the Seamus Ó Riain Senior B hurling competition last week and would be primarily seen as a hurling club, but they're well able for the big ball too.

Many in Tipperary aren't happy that the game was moved out of the traditional Sunday final slot due to the county's hurling representatives Borris-Ileigh having a game in the Munster championship then.

Naomh Eanna made it to the All-Ireland club intermediate football final last year where they lost out to Kerry kingpins Kilcummin. This time around, they're giving the hurling a good welt. An admirable dual club indeed.

Eoghan Rua made it to the All-Ireland final in this grade a couple of years ago, when they ran Glenmore of Kilkenny close. Fancied here too.

The London side, and indeed the state of football in general in London is rapidly improving, but Pearses with Hubert Darcy and Conor Payne on form should have too much.

Promises plenty. Tubber are tough to break down but Corofin always find a way.

END_OF_DOCUMENT_TOKEN_TO_BE_REPLACED

Dublin clubs have got caught on the hop in this competition in recent times, so Boden are well warned.

There will be nothing between these teams, though Portlaoise are generally good to raise their game in Leinster.

Ratoath are in uncharted territory but they have plenty of class about them in Eamonn Wallace and Bryan McMahon. Garrycastle have lots of experience.

The Kildare champs are young and fast and that might tip the balance in their favour.

The Clare champs have more experience at this grade but Rathgormack look good.

The showdown of the weekend. TG4 would have wanted this game, though the Kerry county board wouldn't allow it be televised as they seek a 10'000 plus attendance. Everyone in the county will want to see this.

Dr Crokes have been doggedly finding their way through and one man, in the explosive Tony Brosnan has been keeping them alive. He's running up frightening tallies again this year - his consistency is phenomenal.

Two of Ireland's best forwards NOT in their county panels face off.

Could it be a shootout for a spot on the Kerry team? pic.twitter.com/EkWXFLWknZ

It could turn into a shootout between himself and the two Cliffords. There have been calls for Paudie Clifford and Brosnan to receive Kerry call-ups. Well Peter Keane will have his eyes glued on this and another big performance from either will win the championship and will leave them impossible to ignore.

Borris will be buoyed by their big win last weekend while the Glen might be down having lost the Cork final.

The big one. Live on TG4. Ballygunner are some club team, but Patrickswell have serious talent in Gillane, Lynch and Byrnes.

Promises to be a monumental occasion. Slaughtneil are the most consistent team in the province for a number of years but Dunloy are young and very hungry.

Mellows are looking to regain their title. Thomas' are back again, having made it to the All-Ireland final last year. Two of the most consistent teams in Galway over the last number of years. It should be a good one.

The Galway Gaeltacht men are fancied.


popular
The SportsJOE 12 o'clock quiz | Day 136
The daily diet of Manchester United midfielder Jesse Lingard
The diet of a modern day rugby player compared with a top jockey
COMPETITION: Answer this survey for a chance to win a fabulous stay at the Trident Hotel in Kinsale
James Ryan's misfortune opens Leinster and Ireland doors for Ryan Baird
The SportsJOE 12 o'clock quiz | Day 135
"It's not about winning at underage. It's about building players and building people"
You may also like
4 months ago
"I'd play 18 holes of Pitch n Putt" - Jack O'Shea's All-Ireland final prep pure class
4 months ago
St Patrick's day memories: Rural Caltra with one of the great underdog triumphs
4 months ago
"I was kind of going 'I'm not a Kerry player" - Donaghy's story a brilliant watch
5 months ago
Mayo issue update on crunch Allianz Leagues clash with Kerry
5 months ago
David Clifford sent off for focusing on the game instead of pulling jerseys
4 weeks ago
"We haven't got that excuse anymore" - Kickhams primed for Dublin championship
Next Page