"You're finished, get over it."

Dessie Farrell has been confirmed to stay on as Dublin manager for another two years, following the completion of his original three-year term.

In that time, the former Dublin captain has won one All-Ireland title and reached the semi-finals on two occasions, and of course picked up the three customary Leinster medals.

However, a county like Dublin have become so accustomed to lifting the Sam Maguire, that anything even slightly short of that, every single year, is deemed as a failure. 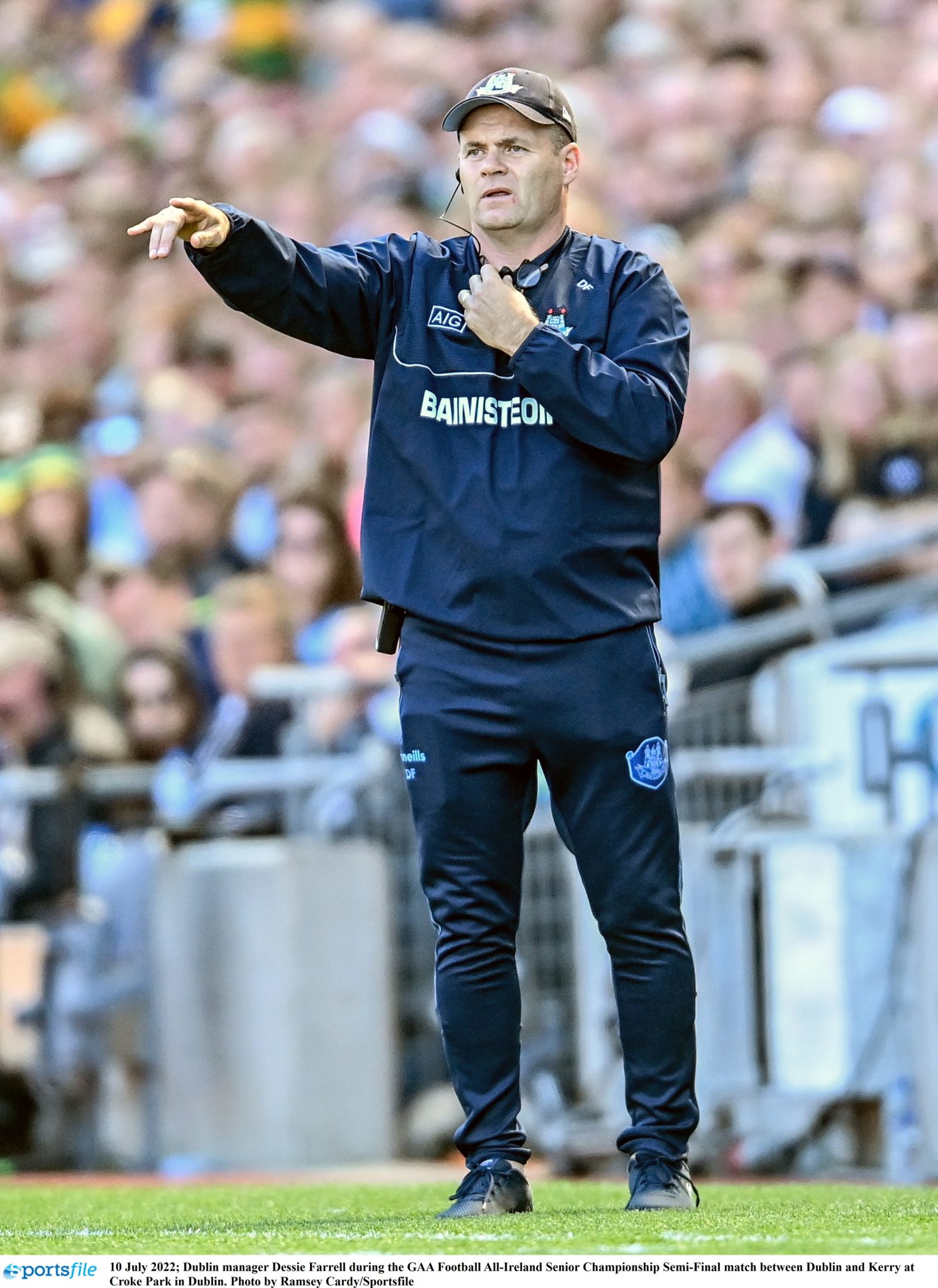 END_OF_DOCUMENT_TOKEN_TO_BE_REPLACED

Although they maybe don't possess the same depth of the golden generation that won six in a row, the last of which with Farrell at the helm - the players they have at their disposal, the money pumped into the grassroots, the state of the art facilities and enormous backroom team to look at every detail, means that there is no real reason they couldn't still be succeeding.

Of course success is relative, and although there are many fans in the capital who wanted to see the back the Na Fianna clubman, he was never going to turn his back on his county.

During his playing days he was obsessed with with representing The Boys in Blue. An All-Ireland winner in 1995, he then went on to captain the team during their more turbulent years. 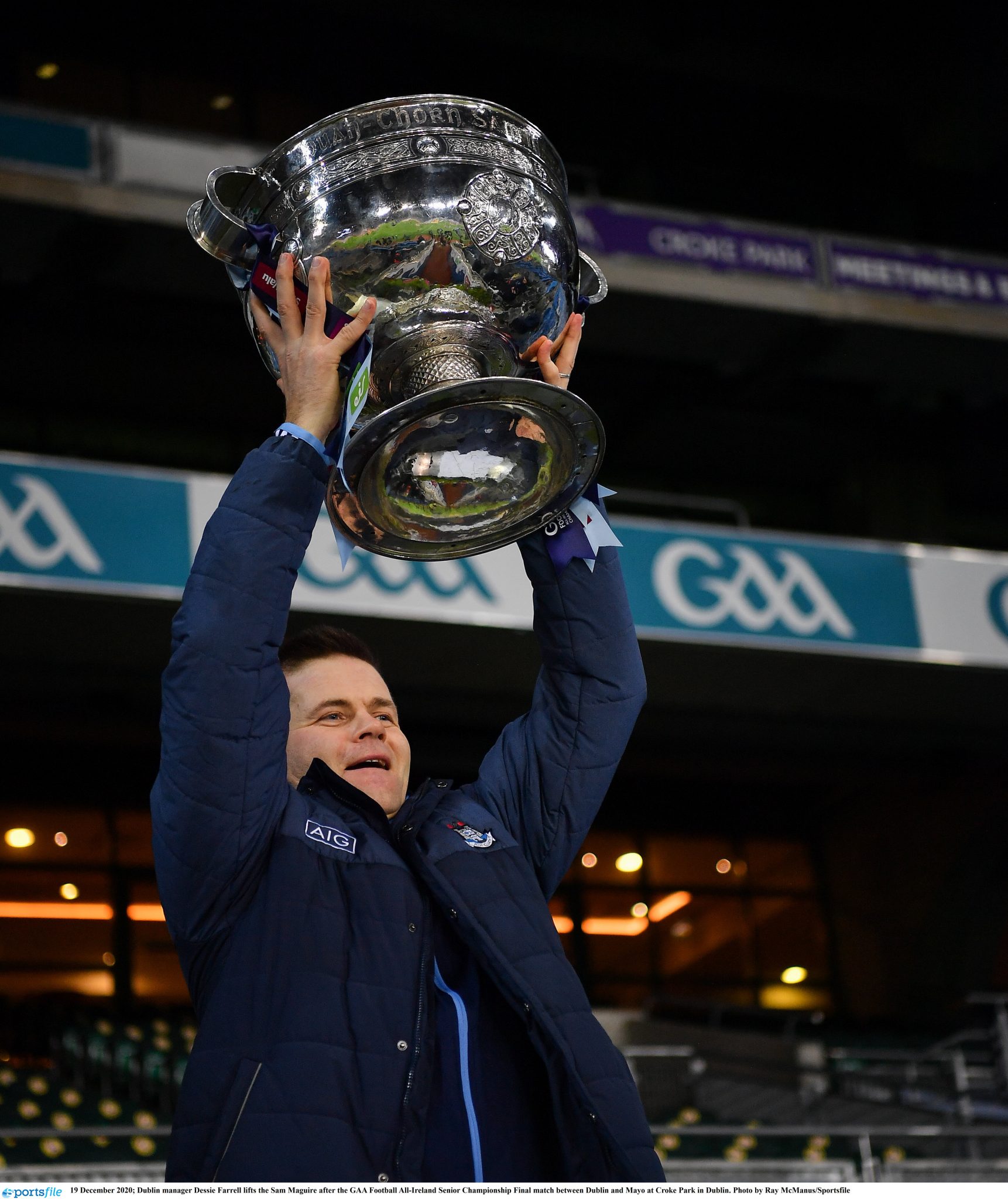 END_OF_DOCUMENT_TOKEN_TO_BE_REPLACED

Back then a Leinster title was not the forgone conclusion it is now, and although the guarantee of media pressure was the same then as it is today, the guarantee of some form of success was not.

Refusing to give up however, the hardened forward battled through injury after injury to wear that blue jersey, and in 2004, at the very twilight of his career, the dreaded anterior cruciate ligament tear happened.

With a broken body, bruised and battered after years of service, the only thing that Farrell was afraid of more than further injury, was the possibility of no longer representing Dublin. 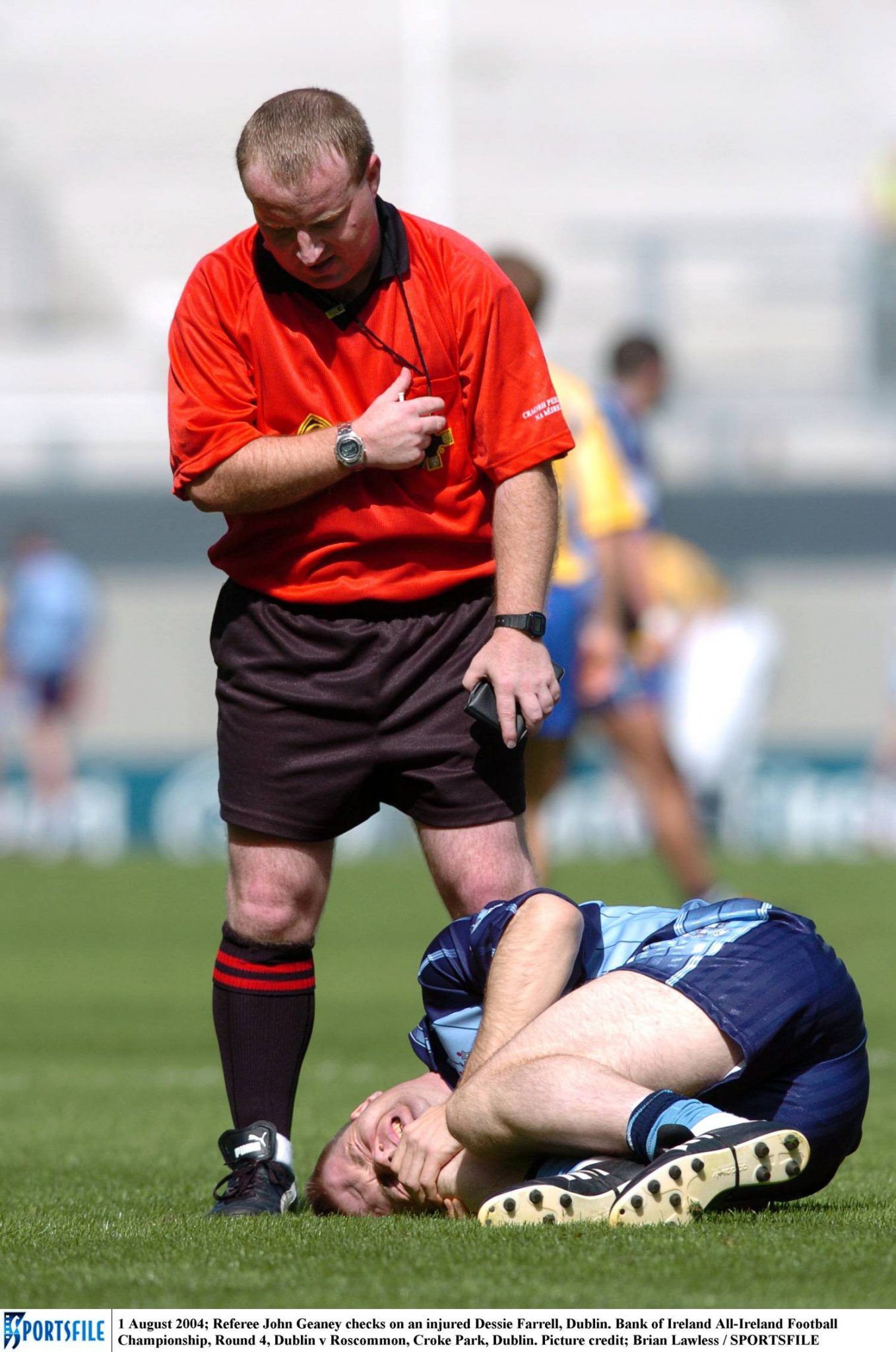 END_OF_DOCUMENT_TOKEN_TO_BE_REPLACED

In his autobiography 'Dessie, Tangled Up in Blue', the current manager transcribes a conversation that he had with his doctor following the surgery on his ACL

'How do ya do it Farrell? How can you go back carrying your leg like that, put yourself through the mill? Have you a real high threshold for pain?' asked Doctor Ray Moran. 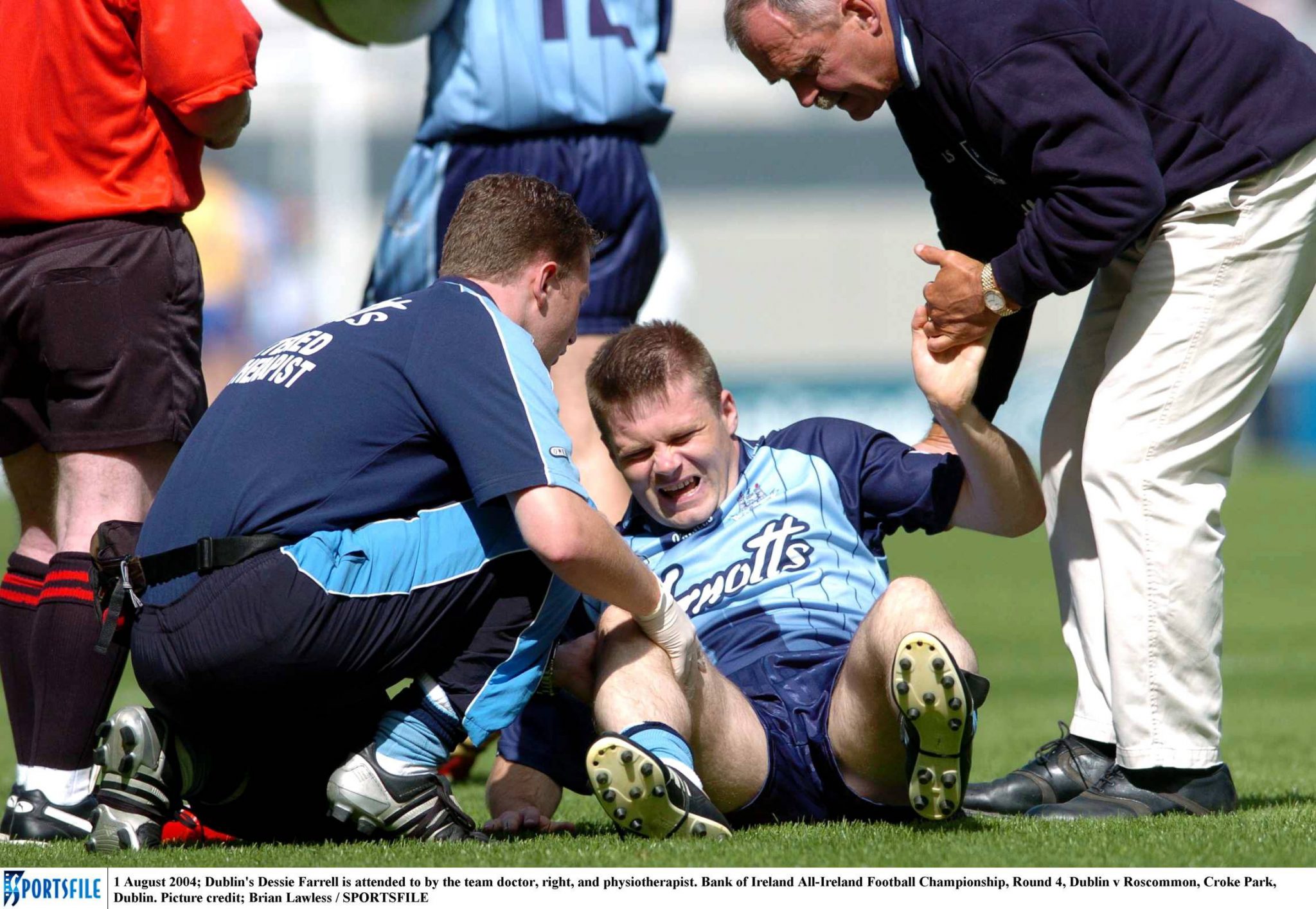 Now I'm 33 years old. The operation has gone very well. Before the procedure, I asked Ray Moran, without asking him (if you get what I mean) to do the job as if I was going back playing.

He's some man, Ray. He understands footballers, especially injured ones - he really understands them, knows what the deal is. 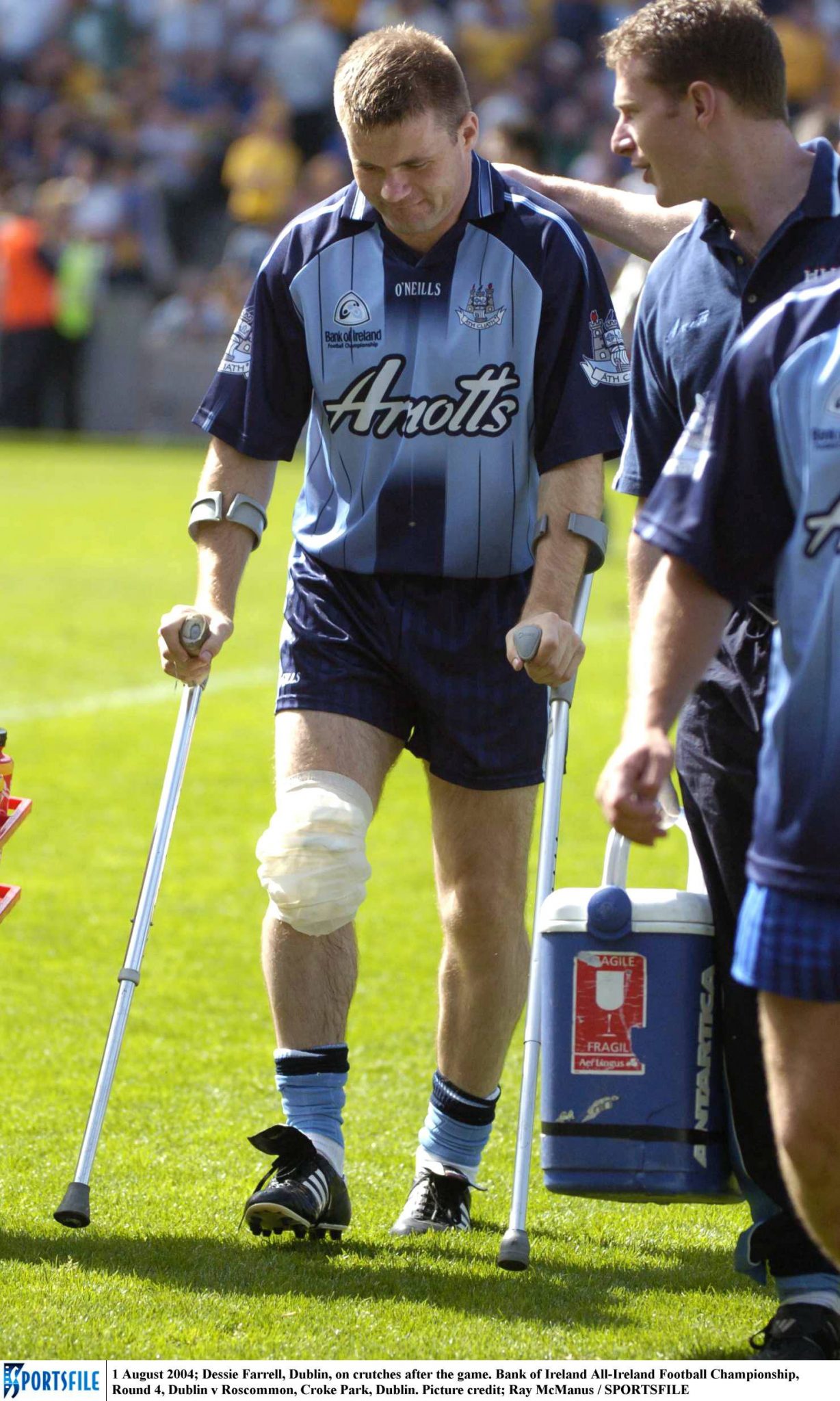 Rehab is going to be a nightmare, but that's the kind of ball-breaking stuff that I'm good at. Training twice a day, up on the bike, exercises every night, health supplements, physio sessions, treatment table with AK. Obsession. It worked for Keano.

Rehab, a nightmare. Not as bad as the other nightmare though.

'What's the other nightmare?' my mate asks.

'It'll give you up Farrell.'

So for those wondering why Dessie Farrell is still putting himself in the firing line of criticism, pressure and potential heartache, the answer is quite simple  - 'the end' of the road will always be worse than the bumps on it.


popular
Peter O'Mahony riled by "petulant s**t" as Munster toasted by Dragons
Martin O'Neill doesn’t wait for a second invitation to settle an old score with Matt Doherty
Grim injury news for Seabelo Senatla after Bundee Aki's red card clear-out
GAA JOE Team of the weekend
55-year-old County Cork athlete beats Kaka in Berlin marathon to remember
James McClean's battle with John McGinn worth the attendance fee alone
Roy Keane wasn't having Ronny Johnsen's lovely gesture in Man United legends game at Anfield
You may also like
6 days ago
Two senior club hurling games and one football championship final on TV this weekend
1 week ago
"He would have been a phenomenal rugby player" - Jack Carty on Michael Murphy
1 week ago
Cormac Costello penalty, Johnny Cooper red card and Eoin Murchan masterclass as Na Fianna edge out Whitehall
1 week ago
Bernard Brogan wants GAA players to be more active in the media and GAA compete against other sports
1 week ago
Roscommon GAA propose lengthy ban for alleged assault on referee
2 weeks ago
Cian McConville finishes the job for Crossmaglen with the most divine of passes
Next Page