It's a sad thing when one of the major talking points of the International Rules isn't about the game.

This time around it was all about the lack of Dublin players representing their country.

There was no Dublin player named on Joe Kernan's squad, and this lead to plenty of criticism from outsiders.

Firstly, you had to exclude a list of players:

END_OF_DOCUMENT_TOKEN_TO_BE_REPLACED

All of the above were playing right up to their respective county finals and O'Callaghan and Connolly progressed into the Leinster championship.

You then take into account a team holiday and the All-Star trip and you can see the logistical problems of why Dublin players weren't there.

It didn't deter one man from being annoyed with them though. Former Monaghan player and Irish Independent columnist Dick Clerkin.

"Will be giving my assessment of this year's International rules in Monday’s Irish Independent....I’ll also be calling out the Dubs on their snub of the series.... let’s call it for what it is!!"

Will be giving my assessment of this years International rules in Monday’s @IndoSport ....I’ll also be calling out the Dubs on their snub of the series.... let’s call it for what it is!!

What he didn't bargain for was Player of the Year nominee, James McCarthy to reply:

"Do some research," replied the Dublin midfielder.

But it got better.

"Have done," Dick replied  "And I see plenty of you were free to travel to Boston this weekend! Regardless of individual reasons, you can’t deny the optics are damning. To say not one Dublin player could have made that trip simply isn’t credible!"

Have done, and I see plenty of you were free to travel to Boston this wknd! Regardless of individual reasons, you can’t deny the optics are damning. To say not one Dublin player could have made that trip simply isn’t credible!

What Clerkin is referring to was the Dublin player that travelled on a weekend trip to Boston to parade the Sam Maguire at the Fenway Classic as well as visits to New York and Chicago. 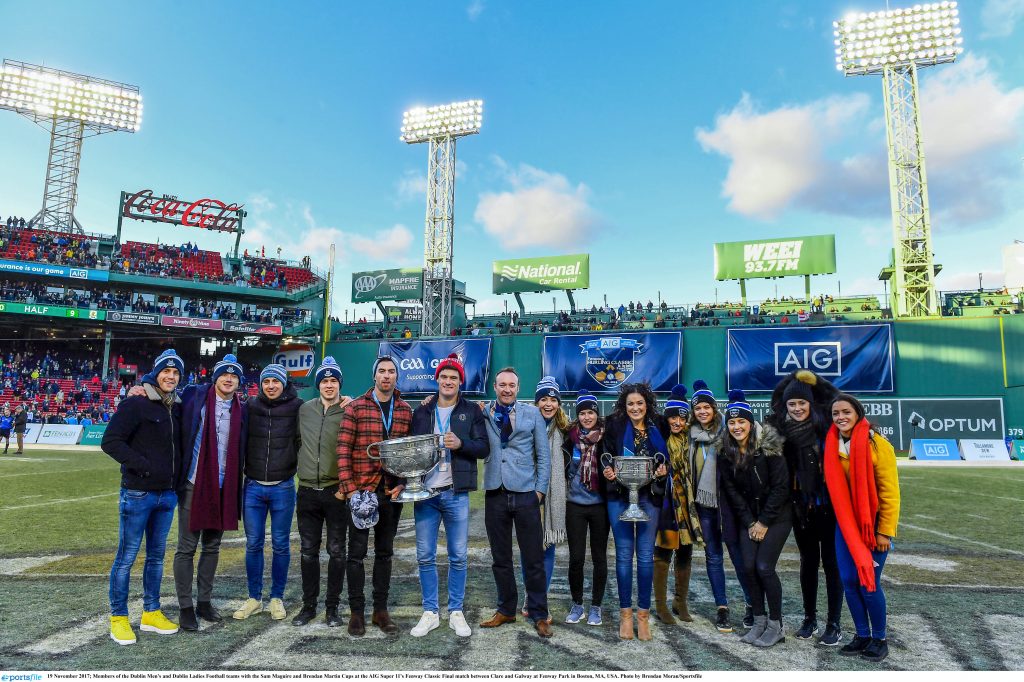 Now, it's a different thing altogether going to New York or Boston for a weekend and taking one day off work than the two or three weeks needed for the International Rules series and Clerkin was called out by fellow Dublin player Jack McCaffrey.

"Don't need to train for a trip to Boston. You'll have to forgive some lads for trying to give something to their clubs at the tail end of a season."

And McCarthy made sure to get the final word in:

"Do you even know who was asked? You have no idea."

Do you even know who was asked? You have no idea

So, finally, Clerkin posed the question if McCarthy and McCaffrey thought it was okay that no Dublin players represented the county.

Without all this tit for tat, simple question lads, @JamesyMac26 @jackmcc93 Are you ok with the fact that Dublin weren’t represented on Irish team?

"Perfectly OK. It's not as if a blanket invitation was given to any Dublin players who fancied a shot. None that were asked were available. I'm sure some of the lads would have loved to play. Get over it."

Fair enough Jack, honest answer. I personally would have been very disappointed not to see my county represented, but each to their own I guess

In his column, Clerkin wrote:

"While their defence has been forthright, the evidence against is damning. Ciarán Whelan openly expressed his disappointment on air that nobody from his own county was represented on the panel."

Whelan's disappointment at Dublin players not travelling does not exactly mean that the evidence is damning. Whelan also said that the clubs should have priority:

"I think the dynamic has changed from 15 years ago when this had a higher profile. Back then, club games were called off to facilitate this. That has changed now, the club comes first and rightly so," said the former Dublin player.

"On the evidence of what we saw this year, the Aussies have started to take the series seriously again."

As McCaffrey noted there wasn't a blanket invite to all Dublin players to travel, that'd be unfair. Presumably, Kernan asked the players that he believed could make a big impact over in Australia but it just so happened that these players were unavailable.

If you look at the players that were part of the 2015 squad as a starting point.

But quoting McCaffrey in his piece, Clerkin wrote:

"I simply asked Jack McCaffrey was he ok with Dublin not being represented in Australia . 'Perfectly Ok' was his reply. A disappointing if unsurprising response."

What's disappointing was the effort to portray these Dublin players in a bad light, McCaffrey's full response was measured and fair, it even prompted Clerkin to say "Fair enough Jack, honest answer."

In fact, for the 39-word response that McCaffrey gave Clerkin explaining that not all Dublin players were asked and that he's sure many of those that weren't would have been delighted to travel he was quoted for two words.

As Conan Doherty said on the GAA Hour:

"He did release this column on Monday, I'd say against better judgement, because it seemed like (Dick Clerkin) made his mind up to write this column before some people came back and gave him good advice."

He was followed by Conor Heneghan in saying:

"So many of these players had legitimate excuses.

"I think Dick had it in his mind to write this column but didn't kind of look into this before going ahead and writing it."

"No player in Ireland is incumbent to play, there's no obligation to play International Rules. That's something to point out straight away."

In the words of James McCarthy, maybe we all need to just get over the fact no Dublin player was there.


popular
Ireland team to play Wales: Andy Farrell's XV, the big calls and bold cuts
Jaden Sancho can't hide his smile as Old Trafford give heartwarming reception
Everton release brutal 59-word statement to confirm Anthony Gordon departure
Five confirmed changes and guidelines to have big impact on 2023 Six Nations
Discontent over Netflix access for Six Nations documentary as Johnny Sexton focuses on his Last Dance
"Every team did it!" - Paul O'Connell on Roy Keane comment to Ronan O'Gara that he couldn't deny
Owen Farrell praises Johnny Sexton in revealing interview ahead of Six Nations
You may also like
2 weeks ago
QUIZ: How many of the 33 county SFC champions for 2022 can you name?
2 weeks ago
"You need to be able to hurl your way out of trouble" - Composure the key to Dunphy's game
3 weeks ago
"We'll have plenty of Christmases" - McGowan and club players should be envied not pitied
1 month ago
'With the worlds’ greatest thief not able to take even just one friendship away' - Cooper retires with heartfelt statement
1 month ago
Mickey Moran gives a rare interview in TG4's brilliant Anton O'Toole documentary
1 month ago
How many of the 65 county senior champions for 2022 can you name?
Next Page