A former club player and coach Paul Dillon is in the middle of a battle with Motor Neurone Disease and in order to help his cause, the club held a blitz type competition, which was organised by a local fundraising organisation.

The tournament went down well, with over €85,000 raised for the cause but on the back of Donegal GAA being made aware of its occurrence last week, the Naomh Colmcille club now find themselves in hot water. 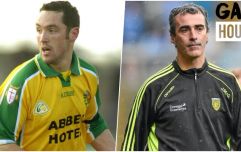 END_OF_DOCUMENT_TOKEN_TO_BE_REPLACED

A probe was subsequently launched by the Donegal CCC and the Donegal Sport Hub and the Inishowen Independent report that the club was soon hit with an eight week ban from adult competition as a result of the staging of 'unauthorised' event.

This 'unauthorised' term comes under rule 6.40 of the GAA's official guide, which states that clubs will be penalised €500 and banned for eight weeks from all adult competitions if they hold or organise a tournament without the GAA's permission.

We contacted Naomh Colmcille for their take on the developments but the north Donegal club will be making no comment with an appeal ongoing.

A hearing is set to take place in the near future regarding the developments, but as it stands, the club will be unable to take part in any of their adult league games over the next eight weeks and will have to forfeit them.


popular
Paul O'Donovan busts the cliches and leaves the mystery behind him in one more emphatic interview
Ireland's rowing heroes on what everyone was shouting as they beat Team GB to bronze
Next time someone doesn't cut you slack for commuting to training, show them Joe Canning's words
Warren Gatland with great response after being asked if he'll set up Twitter account
Aidan O'Shea on gym work, training over lockdown and the importance of younger players bulking up
People are shocked after finding out how much an Olympic gold medal is actually worth
"This could be a one-point game" - It's too close to call between Tyrone and Monaghan
You may also like
5 days ago
"Gaelic football is now just a shooting contest" - Jim McGuinness has an issue with high scoring GAA games
1 week ago
There are three things certain in life - Taxes, death and Neil McGee at full-back for Donegal
1 week ago
Michael Murphy endures nightmare five minutes at Brewster Park
1 week ago
County teams announcing their starting line-ups in advance is pointless
2 weeks ago
"Derry were playing complete and utter blanket defence"
2 weeks ago
"It was like a fashion parade" - When wearing a rivals' jerseys to county training used to be the norm
Next Page