Galway captain Damien Comer has said that he's not very confident of recovering from his broken foot in time for the Tribesmen's Connacht final with Roscommon next month.

Galway will take on the Rossies for the third consecutive year and Comer, who broke his foot while playing in a charity football match late last year, said that he'd love to even try and get a bench spot for the game.

"Yeah I can't see myself turning the corner in that space of time but I won't rule anything out," said Comer at Supervalu’s launch of their 10th season as a sponsor of the All-Ireland SFC.

"I'd love to get back to it. I'd even try for a bench spot but it'll be tight. I'm back doing a bit of running, straight-line running. I haven't really put a time-frame on it. 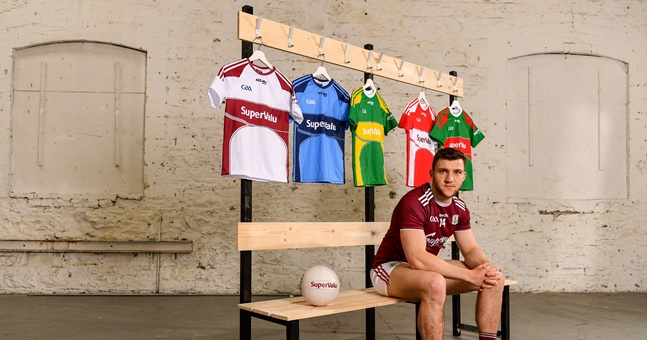 "I'm kind of going by pain-threshold. If it's too sore I take a step back and if it's okay I'll push it on a small bit. That's my gauge. How long it's going to take, I genuinely don't know. Kevin [Walsh] is asking the same question and I can't really answer it.

"I'm just playing it by ear, taking it week by week and see. Hopefully then you turn a corner and next thing you're back in the thick of things."

Comer has said that he is gauging his injury by off how painful his foot is and added that he has recently started some light ball work but only really a few solos.

"Even the first day I did a bit of running and it was sore. Then I kept going and I loosened out. A lot of it is joint-stiffness from it being in the boot and it being immobilised.

"Then you'd try if you were out doing a few runs you might add in a small twist and it's sore so you take a step back and keep going straight. Stuff like that.

"Then some days it might be sorer than others and might just be stiff in the morning. It could be stiff the morning after training and you just kind of get as much into it and prep it as much as you can going into the next session."

Roscommon trumped National League champions Mayo en route to the final and Comer admits that he's not surprised by their win and added that he thinks they would have been fancying their chances heading into the semi-final.

"Not surprised they beat Mayo, they are a Division 1 side, we’ve had ding-dong battles with them all through like," he adds.

"We always find with Roscommon, there’s a fair, I suppose there’s a rivalry, a local rivalry and I think Connacht has gotten so competitive there’s no real easy game, especially between the three, we’re all operating in Division 1, it’s kind of, you know what you’re going to get.

"You’re going to get a tough, physical game and loads of football so it’s, I don’t think it was a shock, the one thing from talking to a lot of Roscommon people, they were expecting a result.

"They were very close down there and I think that is what most people would have expected so I don’t think it is a shock. Connacht has thrown up a few tasty games in the last couple of years in the Championship but that’s the competitiveness of it."

SuperValu today launched their 10th year as sponsor of the GAA Football All-Ireland Senior Championship. Joined by their GAA ambassadors Bernard Brogan, Andy Moran, Damien Comer, Doireann OSullivan and Valerie Mulcahy  SuperValu revealed that they will contribute over 2.6 million to the GAA and GAA Clubs across the country, this year. Throughout their 10-years as GAA sponsor, SuperValu has contributed over 18 million to aid the development of our national sport.


popular
Paul O'Donovan busts the cliches and leaves the mystery behind him in one more emphatic interview
Ireland's rowing heroes on what everyone was shouting as they beat Team GB to bronze
BREAKING: Grainne Murphy issues heartfelt statement as she retires from international swimming
Aidan O'Shea on gym work, training over lockdown and the importance of younger players bulking up
Next time someone doesn't cut you slack for commuting to training, show them Joe Canning's words
Warren Gatland with great response after being asked if he'll set up Twitter account
Rory McIlroy's true allegiance summed up in one text message to Justin Rose
You may also like
5 days ago
"It's an unbelievable achievement" - Joe Canning breaks Henry Shefflin's long standing record
1 week ago
Finals, grudge-matches, revenge - This weekend's GAA TV schedule has it all
3 weeks ago
How Galway wides helped Dublin reach first Leinster final in seven years
3 weeks ago
Sky Sports make bizarre mistake during Dublin v Galway hurling game
1 month ago
"Just because you concede four goals, doesn't mean you rip up the script" - A message for Donegal, Tyrone and Galway
1 month ago
Pádraic Joyce's Galway may be going through an "identity crisis"
Next Page