The Dublin club championship has always been littered with big names, but it doesn't always deliver in terms of entertainment and drama.

Na Fianna and Whitehall Colmcille's dramatic game in today's quarter final however has definitely delivered in terms of being a spectacle, and had everything a neutral would want.

Live on RTE Two, it got off to a slow start, Whitehall clearly looking for the long ball in early, put Na Fianna under pressure and get the Gannon brothers on the ball as much as possible.

GOAL – Na Fianna full-forward Conor McHugh is the quickest to react after a surging run from James Doran to put daylight between the sides
👉 Watch live coverage of @clgNaFianna v @WColmcille in the Dublin SFC quarter-finals on @RTE2 and @RTEPlayer https://t.co/ZfldwHUA2l pic.twitter.com/7RVnYu94pz

Na Fianna were very Dublin-like in the way they managed they game, kept their opposition from sneaking a goal, and slowly but consistently tipped the ball over the bar.

END_OF_DOCUMENT_TOKEN_TO_BE_REPLACED

It was the second half when things burst into life, Johnny Cooper had been playing with a serious edge the entire game, in fact the first whistle hadn't blown five seconds before he was bulldozing players to the ground off the ball.

Already on a yellow card, the county star was lucky not be sent off getting involved in more off-the-ball shenanigans, but the red seemed inevitable and arrived in the worst possible way for his side.

Jonny Cooper is sent off for a second bookable offence and Cormac Costello slots home the resulting penalty. All to play for at Parnell Park
👉 Watch live coverage of @clgNaFianna v @WColmcille in the Dublin SFC quarter-finals on @RTE2 and @RTEPlayer pic.twitter.com/kd5g0FPpZE

END_OF_DOCUMENT_TOKEN_TO_BE_REPLACED

After pulling down the Whitehall froward who was breaking through on goal, the second yellow arrived, and a penalty was awarded, with his Dublin teammate Cormac Costello stepping up to take it.

It was never in doubt as the sharp shooter buried the ball into the back of the net to tie the game, but despite being down to 14 men, Na Fianna were able to control the last few minutes.

Eoin Murchan was outstanding at corner back, cutting down that left flank and setting up huge scores to keep his team in the lead. 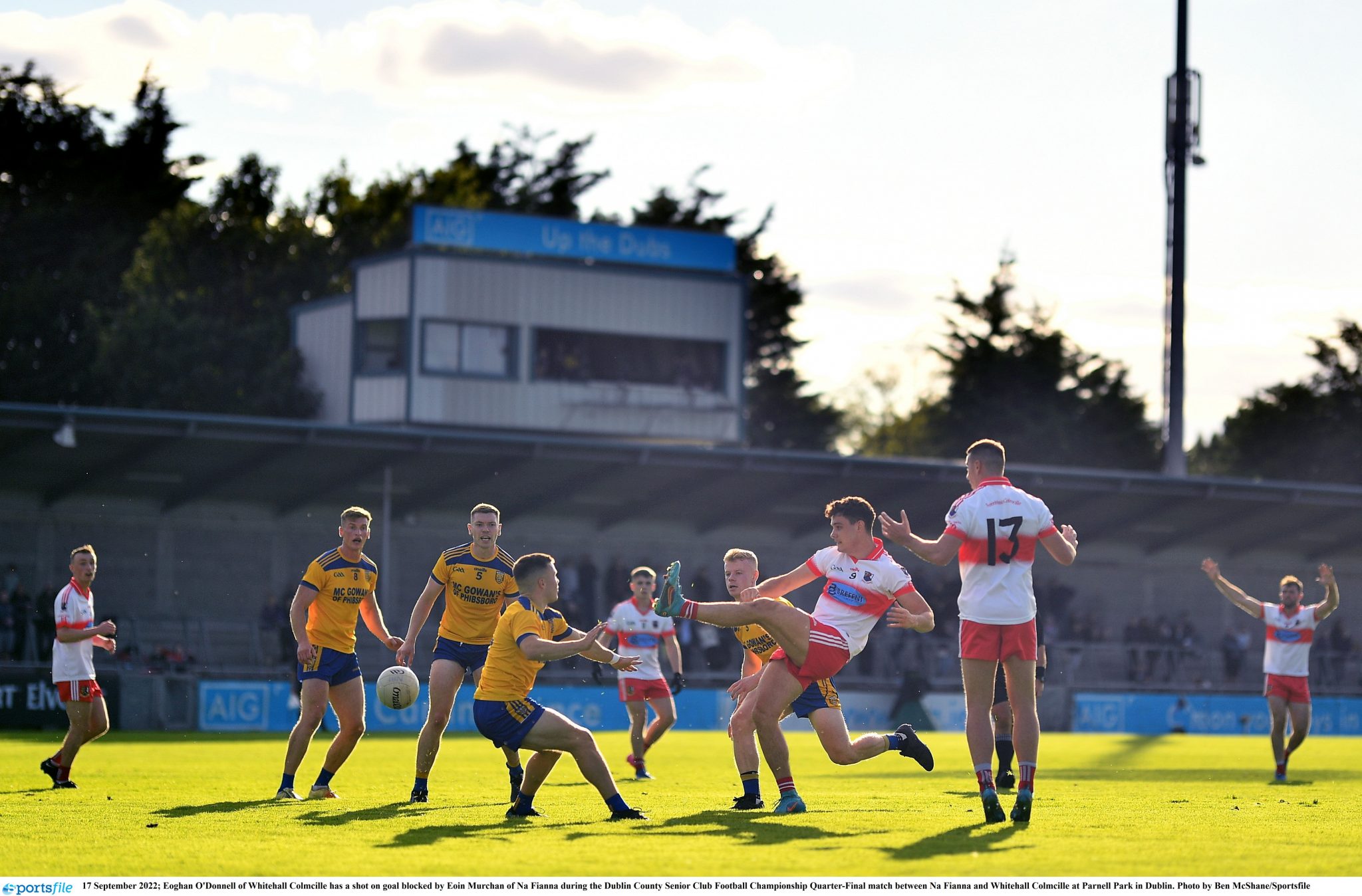 Then with two points in it and the clock already ticking over the allotted five minutes of injury time, a free kick was awarded to Costello.

The back line managed to keep their hearts in check and minds focused as Costello lobbed the ball for Eoghan O'Donnell to get a palm to it, but could only manage it over the bar.

With that the full time whistle was blown and Na Fianna. are through to the semi-final, but as Philly McMahon said on punditry for RTE: "They fell over the line."


popular
Allianz National League Round 2: All the action and talking points
Ireland vs Wales: All the big talking points, moments and player ratings
GAA defends their handling of Kilmacud Crokes and Glen replay saga
Five confirmed changes and guidelines to have big impact on 2023 Six Nations
Juventus are reportedly ready to terminate Paul Pogba's contract
Ireland team to play Wales: Andy Farrell's XV, the big calls and bold cuts
Paul Ince was "disappointed" in Erik ten Hag after Man United beat Reading
You may also like
7 hours ago
The SportsJOE Friday Pub Quiz: Week 9
1 week ago
Lidl launches One Good Club in support of youth mental health
2 weeks ago
Lee Keegan reveals who the toughest person he ever had to mark was
2 weeks ago
Paudie Clifford had the only response needed after being cleaned out by vicious elbow
3 weeks ago
O'Byrne Cup reduced to farce as Offaly withdraw from competition
3 weeks ago
Rory Gallagher expects Glen players to be back for Derry the week after club All-Ireland final
Next Page