A lovely dinked fist-pass over the top from Fiona Doherty, a powering, direct run from Aileen Gilroy with real courage to nip in front of a red jersey hurtling herself out at the ball. One bounce, one hammer of a right foot, one emphatic goal.

It's not necessary to go once more into the magnitude of what Mayo achieved when they dethroned Cork with a blistering Breffni Park performance, the respect which Cora Staunton paid the champions in a breathless interview said it all really.

The footballers from out west mirrored their male counterparts by setting up a mouthwatering decider with Dublin in the TG4 All-Ireland Senior Ladies' Football Championship which takes place on September 24 at Croker.

Three thumping goals brought crashing down the once-insurmountable Rebel wall and upset the odds and then some in the process.

But whilst Cora Staunton won the day with her ridiculous 1-9 tally - only two from dead balls - it was the driving finish of Aileen Gilroy which really lit the place up in one instant and turned the game on its head. 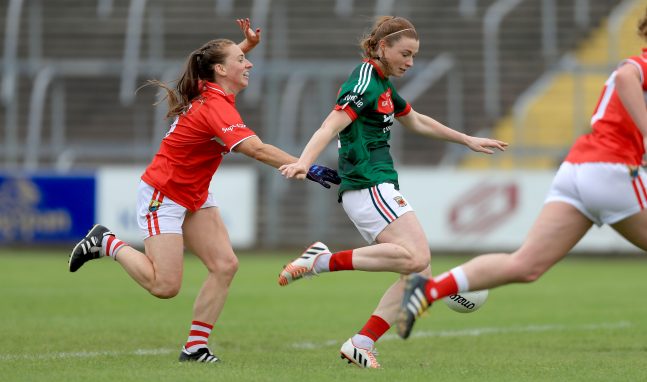 Two points down with 19 minutes left on the clock, Mayo were hanging in there until Gilroy charged forward without one inhibition from the middle of the park to plant the ball firmly in the Cork net and fire her county in front, a position they would never relinquish.

It was Cora Staunton's effort which was voted Goal of the Week though. It involved serious grit, a composed finish under great pressure but is there a hint of steps here?

Amy Dowling then capped it all off straight after Gilroy's strike.

A frightening surge upfield was met with a touch of fortune as the ball dropped in off the post but Mayo would cling onto that lead then for dear life.

By the end though, a few young supporters must've been watching the replays.

The final should be a clinker.

Not all fans are the same – TG4, proper fans of ladies GAA.