He certainly took his own advice.

GAA players commonly wear white tape on their wrists, and if we're being honest, not many people are sure why, apart from the fact that it looks pretty cool (and that is a fact).

There's also another theory that it helps firm up your wrists so that when you fall on the ground or make impact with your hands first that it keeps the joints sturdy.

END_OF_DOCUMENT_TOKEN_TO_BE_REPLACED

In recent years however, players have took to writing messages on the tape, little reminders, inspirational quotes, or what is known the world of sports psychology "triggers."

The idea is that when a player makes a mistake, feels flustered, under pressure, and maybe 'losing their head,' they just need to look at their 'trigger,' which in Meyler's case is a message written on his wrist and use that as point to reset.

This idea of reseting, is to bring yourself back to the present, focus on what's important - the next ball, the next shot, the next pass or whatever, and pull yourself out of that wallowing mind frame.

Of course, in this situation it could just be a quote that means something personal to the Tyrone star, something that gives him a push and an extra edge of motivation.

On his wrist in the All-Ireland final, it said: "Sweat Courage." 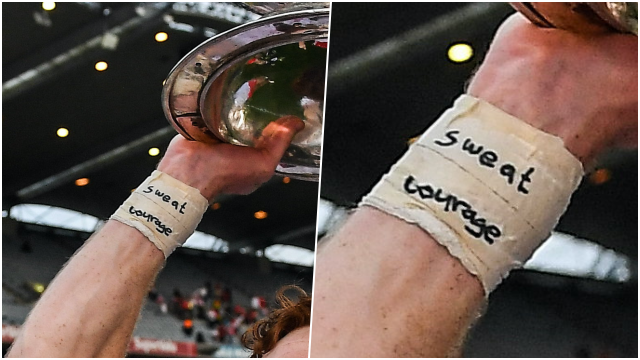 END_OF_DOCUMENT_TOKEN_TO_BE_REPLACED

The half-forward didn't lack any courage this year, putting in the season of his life, and even putting himself into contention to be Player of the Year.

There's no doubt there was plenty of sweat as well, as he covered every blade of grass in every game he played in, showcasing the incredible engine that he has.

Whether it works or not, it certainly didn't do him any harm, and when you're chasing All-Ireland glory, you need to chase all of the 1% progressions that you can.