He's already known nation-wide for club, for county underage teams, for football and hurling, but he's given the opportunity at the very top in 2017 and he's loving it.

The year is capped with two remarkable individual goals at the very beginning of Dublin's two biggest tests. The tone of the semi-final and final is set by O'Callaghan's brilliance and Dublin go on to clinch the All-Ireland with their Cuala gem the undisputed Young Footballer of the Year. 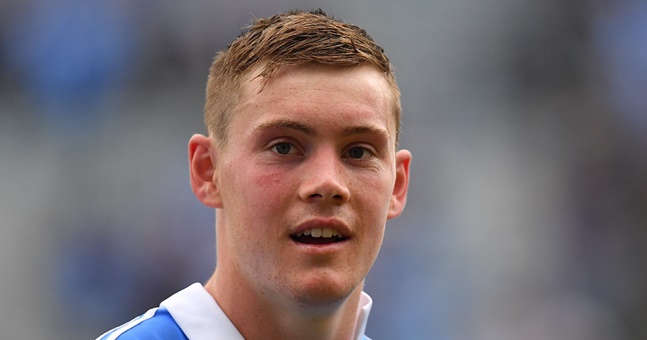 2018 wasn't as effortless for O'Callaghan.

He was still obviously a class player and he still won another All-Ireland at the end of it but he just didn't hit the same heights.

This year though, he's surpassed them.

O'Callaghan is better, stronger, tougher and he's ripping through defenders like he's over the bar for this age group.

Alan Brogan was in studio for the latest GAA Hour and says he isn't surprised.

"I think he has a gym out the back in his house.

"He's a strong man. Even though he looks quite small in stature, he's very well built. He's strong in the air.

"He's a ball-winner, that's his main attribute for me. He can obviously score as well but his ball-winning is fantastic, right from an early age you could see that in him."

Colm Parkinson, however, explained that he too was a ball-winner but couldn't win anything in the air like that.

Alan Brogan was one of the best ball-winners in the game too.

"Not over my head though!" Brogan laughed.

"Well, he'd be a lot broader than me or you, Wooly.

"There was this perception that he's a nice footballer and a nice young lad and stuff and maybe he's shaved the head to change that perception. But he does look a lot tougher now.

"He's obviously going hard at the gym and that score he got where he won the high ball out in front and looked like he snapped his cruciate on the way down..."

A catch, a recovery, a run and a point to match any of them.

"That's as good a score as I've ever, ever seen," Parkinson proclaimed.

Con O'Callaghan with a massive fetch and a great score for @DubGAAOfficial. pic.twitter.com/sWREC0ZQWx


popular
Conor McGregor demands apology from ESPN pundit over Cerrone comments
Kerry vs. Dublin ends in meleé, and a draw
Two giants rise above the fray
Wexford trailblazers go down but father and son show why club GAA is best
David Clifford leaves Dublin for dead to score sublime goal
Charlton want Troy Parrott on loan until end of the season
"I want to be myself... Imitation's not a great thing, you know?"
You may also like
6 days ago
GAA JOE club hurling team of the weekend
1 week ago
"You don't want to change a winning formula" - Maher and McCormack the key for Borris-Ileigh
1 week ago
"I'm up in UCD so I could just go out with a few balls by myself and practice it"
3 weeks ago
Rural clubs the last standing but it's defeatist to say that's what sets them apart
1 month ago
"I almost felt like I lost two years really" - Barrett already focused on the years ahead
1 month ago
"I was taught a lesson by Malone in midfield, he was untouchable"
Next Page