Article updated at 17:16 to include Colm O'Rourke's statement.

The comments have caused controversy since they aired.

LGBT Ireland CEO Paula Fagan has said that Colm O'Rourke's remarks on RTÉ on Sunday night may have had "no bad intention", but an LGBT person listening to them "may think twice about going to their club tonight to play". 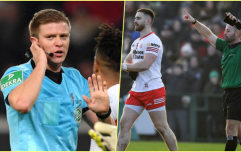 END_OF_DOCUMENT_TOKEN_TO_BE_REPLACED

O'Rourke made the comments on RTÉ's Allianz League Sunday programme last night when analysing Dublin's Michael Fitzsimon's black card for an off-the-ball foul on Mayo's Diarmuid O'Connor in their league game on Saturday. He believed O'Connor had gone down too easily, and the controversial comments came when challenged on his view that it was a soft call by presenter Joanne Cantwell;

O'Rourke "Mick Fitzsimons when the referee gave him the black card couldn't understand it either...

O'Rourke: "Yeah, but if a person isn't going to have the ability to go for the ball and take the chance of hitting somebody then we'll have nothing in the game, it will be a namby-pamby pansy boy game and I think none of us want that sort of stuff."

The pejorative use of homophobic language on national TV is abhorrent and unacceptable. I'm disgusted. @RTEmcbennettd @RTEgaa https://t.co/PtuFHUz5Ur

Speaking to SportsJOE, Paula Fagan of LGBT Ireland noted the potentially harmful effects comments like O'Rourke's can have on the LGBTI community;

"I think the main thing to say really is that while I think the comment was probably, there was no bad intention, the word "pansy" is a derogatory term in terms of lesbian, gay, bi and trans people. It's been historically derogatory... We all know what it means, and the way it was used as well last night was to indicate that the person was being somehow weak or not being courageous. So it has so many negative connotations, and I suppose by using language like that it really does amplify this perception that being LGBTI is somehow negative. It really sends out the message to people, and particularly young people, that they are less than, they're not as good as other people. So I think we have to be so careful around language, I think the impact for a young person or any LGBTI-identified person watching that last night, we know from research studies that it makes young people feel that they don't belong. So if a person is watching that who is LGBTI and they hear that, they may think twice about going to their club tonight to play. It reinforces maybe negative things that they've already been called. And it just has that impact for a young person, and any person watching that last night, if you are an LGBTI person, that hurts. You feel it. Because, it just means that those thought are still there, that people still use that language, they still think that way. That somehow being weaker or less courageous or whatever way it was used is somehow associated with our identities."

The GAA marched in the Pride parade in Dublin last year for the first time, and John Horan of the GAA noted at the time that the organisation was first national sports body in Ireland to establish a Gender Diversity Committee. Paula Fagan says it's important to continue this work in the GAA

"I think people, once they think about it, they are very supportive and we saw that in the marriage equality referendum, we're seeing that now in terms of the cross-country support for Pride Festivals and across all different sectors. And the GAA were great to come out and march in Pride last year. So I think that's all fantastic, but that is only good if is underpinned by an education programme, that people understand how to be inclusive, the terms that they use are important, how to be inclusive of LGBTI people. So that's around language, it's around the representation that's in clubs, that everybody is comfortable and truly can be inclusive and celebratory of lesbian, gay, bi and trans players, referees, spectators... that they truly understand and they understand that deeply, and that comes through education. That LGBTI identities are as worthy and as celebratory as anyone else." 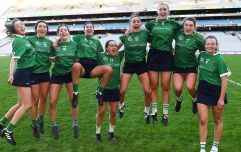 END_OF_DOCUMENT_TOKEN_TO_BE_REPLACED

SportsJOE contacted RTÉ for comment, they informed us that "It is RTÉ's understanding that Colm O'Rourke and David Gough have been in touch with each other privately on this matter." When asked whether the station wished to make a statement about the remarks made by O'Rourke, they said that they had no further comment. Colm O'Rourke told SportsJOE  he would not be making any comment.

"There was no bad intention...but... by using language like that it really does amplify this perception that being LGBTI is somehow negative."


popular
Frank Lampard pays emotional tribute to Seamus Coleman in front of Everton squad
Rory McIlroy in awe of "unbelievable" Tiger Woods but better off without him
No need for Sky Sports to apologise as Shane Lowry stays in PGA mix
Rangers legend says he and Roy Keane didn't speak during Man United spell
Steven Gerrard makes Liverpool admission ahead of Man City title decider
Dele Alli praises 'legend' Seamus Coleman after Everton avoid relegation
PSG offer Kylian Mbappe 'complete control' with insane contract offer
You may also like
6 months ago
Richie Sadlier and Liam Brady disagree over new contract for Stephen Kenny
9 months ago
Less is more as the GAA TV schedule circles the semi-final stages
9 months ago
Finals, grudge-matches, revenge - This weekend's GAA TV schedule has it all
10 months ago
The GAA on TV this weekend is so good, we might just combust with excitment
10 months ago
"The GAA ought to be ashamed" - Joe Brolly vents his frustration on Twitter
10 months ago
RTE pundits embracing strange new world as England keep winning
Next Page