"It's not just management, it's the Laois county board, the team, the supporters"

Let's just get the bad news out of the way right now.

The good news? Cheddar is back in the inter-county game! 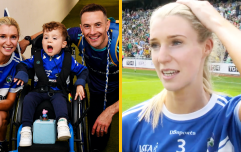 END_OF_DOCUMENT_TOKEN_TO_BE_REPLACED

The Laois hurling legend returns to the hotseat of his county and although he leaves behind massive pundit shoes that will be very hard to fill, The GAA Hour's loss is hurling's gain.

On the latest episode on the build-up to the All-Ireland final, Colm Parkinson described Plunkett as his "most popular pundit" but as surely as an eagle needs to soar, Cheddar needs to be leading and inspiring hurling teams and the O'Moore county are in safe hands.

"I had planned to go in a different place and clearly the opportunity came up and I was approached to go for it. I was only ratified a night or two ago," Plunkett spoke about becoming the new Laois manager on The GAA Hour.

"I'm looking forward to the job. I was there before, I know the team well and there are a lot of work ahead of us.

"Firstly, I would say a big thanks to Eddie [Brennan] and to Niall [Corcoran] and Tommy [Fitzgerald] for the work that they've done. I was always a Laois supporter and following the team. They've put the team in a good place and it's up to us now to build on that and see where there are improvements.

"We just need to really maximise the talent that's in the county and just improve on any aspect that we can and get the performance the best we can.

"Certainly that's what I'll be doing, just pulling all of the strands together and then trying to maximise performances every single day."

Cheddar's analysis, his passion and his concision on hot-button topics, as well as his big heart and affable nature, all combined to make him a prolific pundit on The GAA Hour with Colm Parkinson.

It's a role he has relished. Especially when he ended up reliving talking points at games he was going to watch.

"It's been brilliant. I'm amazed by the reach of the show, Wooly," he said.

"I've really, really enjoyed meeting people along the way and somebody bringing up a point that was discussed the previous week. It was only then that the power of it came home to me.

"I'm very thankful to be on the show and would certainly be open to being on it again but I just don't think I could comment on things properly whilst I'm in this job and I don't think it would be fair to other managers and other teams and certainly not our own team."

You can listen to his final show right here and his talk about being the new Laois manager at the very top of the episode.


popular
Specsavers troll former Liverpool star for Darwin Nunez headbutt claim
“Players flourished when Roy Keane left” - Rio Ferdinand on why Keane was a 'detriment' to Man United
"To be able to call myself the fastest man in Irish history is just amazing" - Olatunde overjoyed after record-breaking run
The moment Israel Olatunde realised he qualified for the Euro 100m final is what it's all about
Jurgen Klopp reacted like everyone else to Darwin Nunez headbutt red card
Jamie Carragher on the three Man United players Erik ten Hag can't trust
Wexford, Waterford and Kilkenny down some good men as Australia calls
You may also like
2 weeks ago
"It's been 20 long years coming, but we did it" - Donoher stars as Laois have their day in the sun
5 months ago
Cha Dwyer scores an incredible last minute over the shoulder point to save Laois from relegation trouble
7 months ago
The wonderful story of the first Nigerian to play for Laois
8 months ago
"We're not going there just to fulfil the fixture." - Clough/Ballacolla hoping there's more to come
8 months ago
Clough/Ballacolla prove that you can only put 15 on the field
8 months ago
"We're not going to Croke Park for a day out. We're going there for a result" - Portarlington on the rise
Next Page