Michael Ryan didn't have many ideas back then. In reality, he was just doing his wife and sister a favour.

In Ballymacarbry, the ladies footballers were stuck for a manager and Ryan agreed to step in for the season. That would be the longest season of his life.

Ryan won the county title with Ballymac that year and he thought that was the end. 'Ready to fade into the background' as he says himself. Instead, the shock of his life lay in store.

He was informed there was a Munster title to chase down and All-Irelands too. That's when he realised this was going to be a long draw.

By 2006, Ballymacarbry would be firmly on their way to becoming the GAA's most successful ever team. And the Waterford ladies too. Ryan had created a dynasty that saw this marvellous club win 14 Munster titles and 10 All-Irelands in the space of 25 brilliant years. 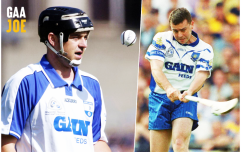 "I still get the odd free pint for it...'twas good times"

END_OF_DOCUMENT_TOKEN_TO_BE_REPLACED

Ryan moved on after the quarter century but the club kept on winning. In 2013, he came back in as a selector and only a couple of weeks ago, they won their 38th Waterford senior title in a row.

Watch their brilliant story, re-told by Michael himself and his daughter Michelle.


popular
Roy Keane on the experience of being managed by Jack Charlton at USA 94
Jack Charlton's role in getting Roy Keane to Manchester United has been revealed
"Never back against the Irish" - How the BBC covered our USA 94 win over Italy
The SportsJOE 12 o'clock quiz | Jack Charlton special (Day 112)
Packie Bonner on being Celtic's teenage goalkeeper and angering Jack Charlton at Euro 88
'ROG was the kingpin... he just wanted to win, win, win' - Barry Murphy
An Ireland XI of players who didn't get the recognition they deserved

You may also like
4 months ago
“I actually feel like I’m dreaming. I thought it was gone"
6 months ago
"It's been a long journey, but such a memorable one" - A life in ladies football with Michelle Ryan
6 months ago
Waterford have lost a good one and the sad thing is he still had more to give
6 months ago
1-32 table of the most competitive hurling championships in Ireland
7 months ago
Brendan Maher crowns peerless year on day of extraordinary days
7 months ago
"It's just as good at home here winning county titles"
Next Page