If he's not the best in the world, he's the worst in the world. If it's not a sideline, a sky-scraping catch or a tap on the back then, as the old saying goes, well, it's a kick in the back-side. 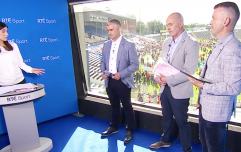 END_OF_DOCUMENT_TOKEN_TO_BE_REPLACED

It's something silly that nobody else would have done and, in this ruthless world, it's a lecture in stone-cold-certainty then that Waterford would be far better off without him.

They may have been, when they won the League final in his absence but that was last month and this is this month. That was the League, this was the first round of the Munster championship and, with Tipperary showing that they haven't gone away, this was a game they'd have lost if they didn't have him.

Sometimes, there's nobody worse but on days like today, there's nobody better. That's because, with Liam Cahill leaving him to stew on the sideline over a silly red card in the League semi-final, it wasn't long before Cahill knew, Aussie knew and everyone in Waterford knew that he'd made his point. They needed him now.

Cahill didn't start him, the obvious take-away being that he was banking on the same 15 who, just last month, made Cork look average. But Tipperary were on song here and in Walsh Park, in the white heat of championship, Waterford were the ones looking average. They trailled by four points at the break and, with their short puck-out strategy breaking down, with Mark Kehoe and Noel McGrath on fire for Tipp, it could have been a whole lot more.

"I don't know what you'd call it," said Shane Dowling on The Sunday Game, "Everything they did was so poor."

Championship hurling. You couldn't say it's for the easily-intimidated pic.twitter.com/WtMDyunaFd

And you couldn't argue with him either. The news quickly came through that not only was Jamie Barron coming in but Aussie was coming in too and the second half was only two minutes old by the time he'd scored one of those points. Dessie Hutchinson laid it off to him and he'd caught, struck and scored before you could see that he'd got the ball in his hands.

END_OF_DOCUMENT_TOKEN_TO_BE_REPLACED

The Waterford crowd were roaring now. Barron too, made a huge impact in that second half as did eventual man-of-the-match Patrick Curran who, with his composure and laser-guided shooting, ensured that Tipperary were punished for every mistake they made. Michael Kiely did well for his goal and there was a real pep in Waterford's step by the time Dessie Hutchinson rattled home one of his own.

All the while, Aussie was orchestrating things. With Tipp rallying, he set up Shane McNulty for a score that they badly needed. He set up Jamie Barron for another and then he scored a sideline for the biggest roar of the day.

In the RTE stuidos, they wondered if Michael Kiely was lucky to get away with a first half swing on Seamus Kennedy.

"I don't think that's anywhere much near the ball. He got his head split. It was loose use of the hurley and I think it should have been a red card," said Dalo.

But there was no-one wondering about who changed the game here.


popular
Eamon McGee just couldn't help himself with Armagh-melee tweet
Robert Finnerty's strut up to the penalty spot was the stuff of legend
Strongest Ireland team to face New Zealand in Test opener, after squad set-back
How Man United would line-up if they land their big summer transfer targets
Conor Gleeson's gesture to heartbroken Ethan Rafferty a tonic after sideline brawl
Andros Townsend claims 'moaning' Jurgen Klopp has 'got his way again'
Ireland include plenty of new faces in team to face Maori All Blacks
You may also like
1 month ago
"Jesus, no, if he finds out, he'll think I'm going soft now." - the social life of inter-county GAA players
2 months ago
"It's becoming nearly embarrassing watching hurling at the minute" - Calls for hand-pass rule change in hurling
2 months ago
Rory Hayes a class act on and off the field as Clare destroy Tipp
2 months ago
"We kind of played a double centre forward to an extent." - The Tipp tactics that gave Limerick a fright in 2021
2 months ago
Liam Sheedy and Derek McGrath disagree on throw ball in Tipp-Waterford
2 months ago
Orla O'Dywer becomes first Irish female to win AFLW All-Star as Staunton somehow misses out
Next Page