"He would dig you out of a hole, there's nobody else like him"

You wouldn't think he has played in four All-Ireland finals. You probably never thought he was Dublin's most clinical or dangerous forward.

But you can't argue with the facts.

Three of the most powerful and influential men in Dublin football over the last number of years. Each one of the three reckoned O'Gara had something something about him.

That tells a story in itself.

No matter who was in charge, O'Gara was front and centre and if he wasn't starting and tearing into opposition players from minute one, he was always one of the first subs Dublin would bank on to make an impact with the game in the melting pot.

He's had his doubters, but he survived 3 Dublin managers and always had a say in Dublin's successes.

In his own words - "I have spent 11 years living out my dreams as a kid growing up in this great city." pic.twitter.com/ECFgcibbdP

The Templeogue Synge Street club man usually made his presence felt. He always threw himself into the deep end.

END_OF_DOCUMENT_TOKEN_TO_BE_REPLACED

Nobody knows O'Gara better than Denis Bastick, who played alongside him for years in their club colours as well as in the sky blue. We chatted to Bastick, who singled out the sheer single-mindedness, aggression and physicality that O'Gara brought not just to games, but to training as well.

He had something unique to offer. That's why managers had so much faith in him.

"There's nobody else like Eoghan. He could do things that others can't.

"The strength and physicality that he brought was a nightmare for defenders and he'd keep going until he made an impact..."

"He raised the bar in training. There'd be no-one slacking off with Eoghan around because his attitude is always spot on and he was always up for the challenge. He was a leader by his actions and that's great for any squad.."

"That's the type of player Eoghan was. The game could be going against you and the team, but he'd be the same player, he'd still be running hard and trying to make inroads, fighting for every inch..."

"He was living off scraps for large parts, and that's why he always had to be tuned in and make every chance count, and he knew that and lived by it."

END_OF_DOCUMENT_TOKEN_TO_BE_REPLACED

"For me as a midfielder, he was always a target to aim at. He'd turn a bad ball into a good ball just through sheer work-rate."

"I wasn't surprised to see him go no, he has a young family at home and he's given it his all for eleven years. It was a great way to bow out, and he'll have lots of great memories."

It all started in 2008. Back then O'Gara won an All-Ireland junior with Jonny Cooper and Mick Fitzsimons and that was the beginning of a beautiful journey.

Caffrey called him into the senior panel later that year and for the next eleven, he would remain a pivotal squad player during Dublin's most successful ever era.

He had his doubters, but the regard his teammates and managers held him in tells the real story. Opponents never had it easy either. 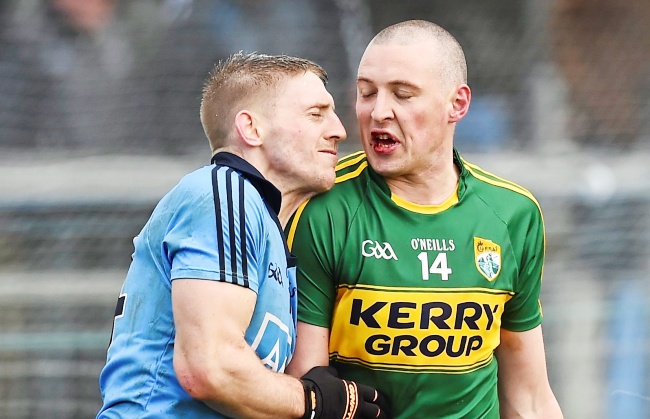 The Dublin players will miss him around the place.

Dean Rock dubbed him the "ultimate teammate," while Bernard Brogan will never forget their days in blue.

Wouldn't normally tweet a goodbye but everyone should know that Eoghan O'Gara is one of the greatest humans to ever walk this earth! We'll miss him, a legend 😞💙

Was a pleasure to go to battle with you my man! My favourite days in blue!👊 pic.twitter.com/KwELsbpxiH

Not all heroes wear capes 🦈 A Synge Street legend @eoghanogara

Love to hate battling with this powerhouse. Hes going be missed, congrats and a great career. A man that knew the meaning of leadership and something bigger then oneself. 💙👌 https://t.co/wZM0JkuTln

The ultimate selfless teammate💙 There will be a massive space missing in the dressing room in 2020. A great career & a legend of Dublin GAA. #EOG https://t.co/7kAHy55vHg


popular
"If Murray is playing that first half for England, he's probably Man of the Match"
Jacob Stockdale and Johnny Sexton not spared by English press
Baz & Andrew's House Of Rugby - Twickenham carnage
Triple Crown wrenched away as England scrape Ireland off their boots
'Were they up for it more than us? That's my responsibility' - Andy Farrell
ROG hits the nail on the head assessing Ireland's performance
Tyson Fury reveals what happened when he sparred Anthony Joshua
You may also like
1 week ago
"You're still trying to get your one-rep max higher, and your fitness higher"
4 weeks ago
Tipperary make statement of intent with battling draw against Dublin
4 weeks ago
"I was thinking, 'Oh my God, how am I supposed to play beside them?'"
4 weeks ago
Two giants rise above the fray
1 month ago
Kerry vs. Dublin ends in meleé, and a draw
1 month ago
David Clifford leaves Dublin for dead to score sublime goal
Next Page