From 2017 to this: Key men a shadow of themselves as Waterford go down quietly

Tadhg De Búrca was the most prominent sweeper in the country. Pauric Mahony wasn't able to miss. Jamie Barron was running riot. Austin Gleeson was one of the best hurlers in the country and Stephen O'Keeffe was the best goalie.

Fast forward two years and it's all gone the other way.

A windy Sunday in Walsh Park and Waterford's lives are on the line. They've lost two in a row, lose again and they're finished. Surely they'll raise a gallop in their home pitch, surely it won't end like this.

"We'd love to see a few hurleys broke," says Déise legend Ken McGrath on The Sunday Game before the throw-in. He's wired to the moon. The team start well aided by the south east gale but the fire doesn't burn for long in Waterford bellies.

Where has it all gone wrong?

The performances of the key players, five of them mentioned above tells a lot.

Tadhg De Búrca was dropping balls and miscuing passes. Pauric Mahony hit wides for sport and ended his afternoon with a wild pull and a soul-destroying walk up the stand steps. Jamie Barron that buzzing ball of energy was unrecognisable from his former self. He barely got a touch of the ball in midfield. Even Stephen O'Keeffe's puck-outs were hit and miss. And then there's Austin Gleeson, the 2016 Hurler of the Year and one of the most naturally skilful in the country, was subbed off at half-time.

Mahony's pull, borne out of frustration was so uncharacteristic of the honest hurler we've seen light up the championship for the last few years.

So uncharacteristic from Pauric Mahony - one of the most honest hurlers in the game. 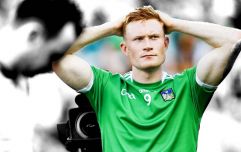 END_OF_DOCUMENT_TOKEN_TO_BE_REPLACED

Things just don't seem right. Players don't look to be in their right positions - Austin Gleeson for one has never nailed one down. Kevin Moran has lost his pace. The tactics with the breeze were fairly confusing as the Déise drew men out the field and then proceeded to lump ball in on top of an isolated two and at times one-man full forward line.

Indeed, the only player who emerged with a bit of credit from this 2-24 to 0-10 hammering was Conor Prunty, the Abbeyside youngster who gave Aaron Gillane lots of it and never once gave in at full back.

Brick Walsh also tried his best when it came on.

But it too little and too seldom against the All-Ireland champions who didn't even have to be that good out there.

Even though Gearoid Hegarty and Declan Hannon still were.

Their season is back on track. Waterford's is sharply and confusingly finished.


popular
"Conor Murray was hung out to dry"
Kilkenny youngster pulls off the no-look hand-pass once more
"Ireland don't ever do anything different and that's the worry" - Mike Tindall
Georges St-Pierre discusses possibility of fighting Conor McGregor
Jacob Stockdale and Johnny Sexton not spared by English press
"If Murray is playing that first half for England, he's probably Man of the Match"
ROG hits the nail on the head assessing Ireland's performance
You may also like
1 month ago
1-32 table of the most competitive hurling championships in Ireland
4 months ago
Cian Lynch's last five minutes in Limerick final will be remembered with the best of them
4 months ago
Feast of club GAA live on the box and GAA GO this weekend
5 months ago
Ballyhale post cricket score as King Con and Hedgo light it up in Dublin
5 months ago
Kerry defy odds to win first ever All-Ireland junior camogie title
6 months ago
The ultimate, defining quiz of the 2019 hurling championship
Next Page