Footballing dynasties have played a big part in the Premier League.

Darren Ferguson won the league as a player under his father Alex in the competition's first season, while both Ian Wright and son Shaun Wright-Phillips have winner's medals of their own.

Now we can add Peter and Kasper Schmeichel to the list, after the Leicester City goalkeeper joined his father in winning the competition for the first time at the age of 29.

And now Sky Bet are offering odds on Kasper's son Max also lifting the trophy, despite the youngster still being in primary school.

This is Max, Kasper Schmeichel's son. Who do we reckon he'll win the #PremierLeague with, Bradford, Ipswich, Crewe? pic.twitter.com/uB1eghJJBi

Sky Bet are offering 250/1 on Max winning the Premier League in his lifetime, though you might have to wait a while as the youngest Schmeichel boy was only born in 2010. 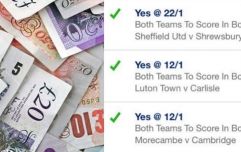 END_OF_DOCUMENT_TOKEN_TO_BE_REPLACED

If you're feeling really ambitious, however, you can bet on lightning striking for a third time.

That's right, Max Schmeichel to emulate both Peter and Kasper by winning the Premier League title at the age of 29 is available at 1000/1.

Those might sound like long odds, but you've got to remember that Leicester were 5000/1 to win this season's title. If that can happen, then surely we can't rule out a child growing up to do what his father and grandfather did.


popular
"I did enjoy Roy Keane absolutely sh*tting his pants when someone tougher than him challenged him"
You'd be doing extremely well to get 100% in this US sports badge quiz
The SportsJOE 12 o'clock quiz | Day 192
Josh van der Flier recalls first Leinster training session with Brian O'Driscoll
Johann van Graan addresses talk of Munster return for Simon Zebo
SportsJOE 2000s Football Quiz | Round 2
The SportsJOE 12 o'clock quiz | Day 193
You may also like
2 years ago
Our betting tips for this weekends All-Ireland semi finals
3 years ago
Back all five of our US Masters outsiders and you might win some money*
3 years ago
TWEET: This high stakes punter's betting statement will make your eyes water
3 years ago
Dublin punter one win away from being a millionaire - still pockets over €350,000 on crazy accumulator
4 years ago
This is how Leicester City's title odds have dropped throughout the season
4 years ago
Two Leicester fans cashed out of their Leicester title bets just before the Manchester United match
Next Page