France were underwhelming against Australia

France secured three points in their first group game of this World Cup against Australia, but did very little to convince the doubters that they can go all the way.

Paul Pogba's deflected strike gave Didier Deschamps' side a 2-1 win over the Socceroos, but the supremely talented front three of Kylian Mbappé, Antoine Griezmann and Ousmane Dembélé did not link up as well as people had anticipated. 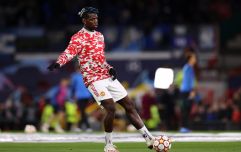 END_OF_DOCUMENT_TOKEN_TO_BE_REPLACED

"He is a formidable 19-year-old striker, who has shown great things to PSG and will continue to improve. Mbappé will be one of the cracks of tomorrow. But I find him more physical than talented, like Pogba I think, even if I have not seen him play this season", Xavi said.

Mbappé is blessed with electric pace which he uses to his advantage, running in behind and beating defenders 1v1, but he does not lack technique. Paul Pogba does not have Mbappé's speed but his impressive physique does add another dimension to his game, combined with his excellent technical ability.

Xavi was part of successful Spain and Barcelona teams who dominated the world playing a very technical style of football, keeping the ball on the ground, but there's more than one way to skin a cat. France would be silly not to make the most of Mbappé's pace and Pogba's physicality.