'Breaking the rules if done for a good cause is NEVER A CRIME...'

The man responsible for invading the pitch with a rainbow flag during Portugal's World Cup game with Uruguay in Qatar on Monday has released a statement, saying 'breaking rules for a good cause is never a crime'.

Mario Ferri, an Italian, was quickly identified as the man behind the stunt by the media in his home country.

END_OF_DOCUMENT_TOKEN_TO_BE_REPLACED

During the second half, he was briefly caught on camera as he ran onto the field holding aloft the rainbow flag. He also wore a t-shirt, carrying messages in support of Ukraine and women in Iran.

Ferri, who carried out a similar stunt to highlight child poverty during the Brazil World Cup of 2014, released a post on his Instagram page on Tuesday explaining the motivation behind his actions.

END_OF_DOCUMENT_TOKEN_TO_BE_REPLACED

'I wanted to send some IMPORTANT messages to me that I’ve lived on my skin in the past months...

'1) A message for Iran where I have friends who are suffering, where women are not respected... THE WORLD MUST CHANGE, we can do it together with STRONG gestures, that come from the heart, WITH COURAGE.

'2) FIFA banned rainbow captains bands and human rights flags on the stands, they blocked everyone, BUT NOT ME, like a Robinhood 2.0 I brought the message of the PEOPLE. We want a free world that laughs fucks all races and all the ideas. 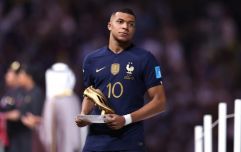 END_OF_DOCUMENT_TOKEN_TO_BE_REPLACED

'3) SAVE THE UKRAINE. I spent a month at the war in Kiev as a volunteer and saw how much that people were suffering. WE WANT PEACE UK️ IN UKRAINE, GLORY TO UKRAINE.'

Finally, he added: 'Thank you for all the messages of love that I receive from the world, from Iran and Ukraine.

'Breaking the rules if done for a good cause is NEVER A CRIME.'

Ferri was escorted from the pitch by security personnel. It is not known what has happened to him in the time since the incident.

His Instagram story features several posts from last night's game prior to being intercepted by security. He has updated his story since, thanking people for their messages of support.


popular
"Every team did it!" - Paul O'Connell on Roy Keane comment to Ronan O'Gara that he couldn't deny
Five confirmed changes and guidelines to have big impact on 2023 Six Nations
"It's crazy to think Bundee Aki might come straight in and start against Wales"
CCCC order replay of All-Ireland club football final
Everton release brutal 59-word statement to confirm Anthony Gordon departure
British publication urges Gareth Southgate to claim Evan Ferguson for England
Owen Farrell praises Johnny Sexton in revealing interview ahead of Six Nations
You may also like
1 month ago
Karim Benzema unfollows France teammates in latest twist
1 month ago
World Cup referee hits back at claims that Argentina goal should have been disallowed
1 month ago
More than 200,000 fuming France fans sign petition calling for World Cup final to be replayed
1 month ago
FIFA investigating how Salt Bae got onto pitch at the World Cup final
1 month ago
Olivier Giroud responds after claim he pretended he couldn't speak English to avoid jersey swap
1 month ago
Footage of France players mocking Lionel Messi emerges
Next Page