The reaction to Wes Hoolahan's Norwich exit says it all

The Championship club announced Hoolahan's departure on Monday morning, and revealed that they will give the club legend a special send-off during their final home game of the season on Saturday against Leeds United.

Hoolahan joined Norwich in 2008 from Blackpool and has made 350 appearances for the Canaries, scoring 53 goals. The Dubliner helped the team earn promotion from League One to the Premier League and played four campaigns in the top-flight.

Hoolahan announced his retirement from international football earlier this year and will turn 36 next month. He walks away from Carrow Road with no regrets. 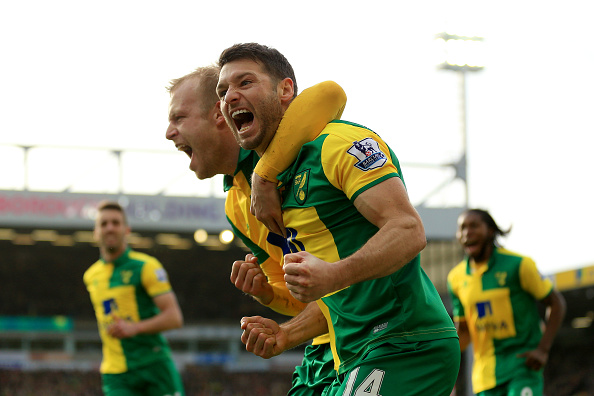 "It’s been a great ten years. I've thoroughly enjoyed myself at this club and it's going to be an emotional day on Saturday against Leeds," Hoolahan said in an open letter to fans on Norwich's website.

"Even through the downs, they've always turned out. In my first year here we were relegated but then you'd walk out into a League One game in front of 26,000 fans. It's one of the best clubs in the country and the support is always brilliant."

🎥 Even the best things come to an end 😢

The reaction from Norwich fans to Hoolahan's departure conveys how valued he was and how much he will be missed.

Ah man, what a player Wes has been. Given me more pleasure than any other footballer, and he’s a lovely guy. It’s been a thrill to watch him for the last 10 years. Saturday is going to be well emosh. #ThanksWes

My thank you to our very own Messi for helping me to grow up to love, watch and support #NCFC... #ThanksWes pic.twitter.com/2K7E9ZNfI2

Not his best goal for @NorwichCityFC, but probably my favourite. Summed him up as a player. Touch. Skill. Composure. Made one defender pay to come back into the ground. Put another on his arse. Then cool as you like past the keeper. Pleasure to watch. #ThanksWes pic.twitter.com/nefJSfW7HH

Sad that the time has come for Wes Hoolahan to move on but now seems like the right time. Thanks for all you've done for the club #ThanksWes #ncfc

The best I have ever seen in yellow and green. He made want to play football, and I enjoyed every second of him playing for #NCFC. Legend is an overused word in football, but for Wes Hoolahan, it doesn’t describe his impact enough. What a footballer. #ThanksWes https://t.co/jNP2VU6iFM

Wow Wes going after 10 years. Absolutely gutted but I guess it wasn’t unexpected. Best of luck for the future Wes. Thank you for everything 👏🏻 Forever a Norwich legend💛💚 #ncfc #ThanksWes

Me when Wes walks of the pitch on Saturday... #ThanksWes #ncfc pic.twitter.com/G0mU4iuTdf

Even though we all knew it was coming it doesn’t make it any easier 😢💔 #ThanksWes #wessi #ncfc https://t.co/de5i7sZCTt

Gutted I won’t be at Carrow Road on Saturday to say goodbye to Wes. Best player I have seen play for Norwich over such a long period of time. #ThanksWes


popular
Rob Kearney taught a classic GAA lesson when he tried to have the craic in second game back
Ex-Down boss Paddy Tally will be part of Jack O'Connor's staff if he's offered the Kerry job
Shane Lowry had no problem setting reporters straight at Ryder Cup briefing
Meath superstar named player of the month after sensational final performance
GAA could learn a thing or two from AFL's parade and self-promotion
The scenes in Newbridge as the biggest hit and hope ever knocks Moorefield out
The SportsJOE 12 o'clock quiz | No. 384
You may also like
3 years ago
Wes Hoolahan completes return to the Championship
3 years ago
Wes Hoolahan training with Championship club ahead of potential move
3 years ago
Joey Barton reportedly wants to sign Wes Hoolahan
3 years ago
Eamon Dunphy finally manages to shoehorn Wes Hoolahan into the World Cup
3 years ago
Wes Hoolahan contacted by Steven Gerrard about playing for Rangers
5 days ago
Cork duo demolish Hull in Championship clash
Next Page