What a game this should be.

Ireland will play Northern Ireland in a friendly at the Aviva Stadium on Thursday, November 15 this year.

The fixture was confirmed this afternoon and will take place for days before Ireland play Denmark in the final round of the Uefa Nations League. It will be the first game between the two sides since May 2011 [Nations Cup].

END_OF_DOCUMENT_TOKEN_TO_BE_REPLACED

The news got us looking at the best both sides have to offer.

Of Northern Ireland's latest 25-man squad, only four of them are in the Premier League and only three of them would make our United Ireland team.

Listen, the Premier League isn't the bastion of good players and a SportsJOE United Ireland select side certainly doesn't set in stone any final judgement on the ability of any footballer (honestly) but the north have performed incredible feats in the last three years and they've done it with a crop of footballers on lower level teams.

END_OF_DOCUMENT_TOKEN_TO_BE_REPLACED

Admittedly, there's no big difference between the Premier League and the Championship and here are plenty of duds robbing a living in the English top flight. There are also too many gems who deserve a shot at the big time being forced to look in from the outside instead but it's tough to make a confident case for any of the north's squad who aren't already in that bracket.

Still, the Windsor Park outfit were able to secure automatic qualification to Euro 2016 and they too made it to the last 16 in France.

END_OF_DOCUMENT_TOKEN_TO_BE_REPLACED

In this campaign, they had their playoff spot confirmed with two games remaining after winning five competitive games in a row.

When you think of where they've come from in recent history, that extended goalless run under Sammy McIlroy, not managing a major tournament in so long, now it's almost becoming habit, these sort of results.

But only three of their current players would make it onto a starting team for a United Ireland and that's why Michael O'Neill deserves such praise. 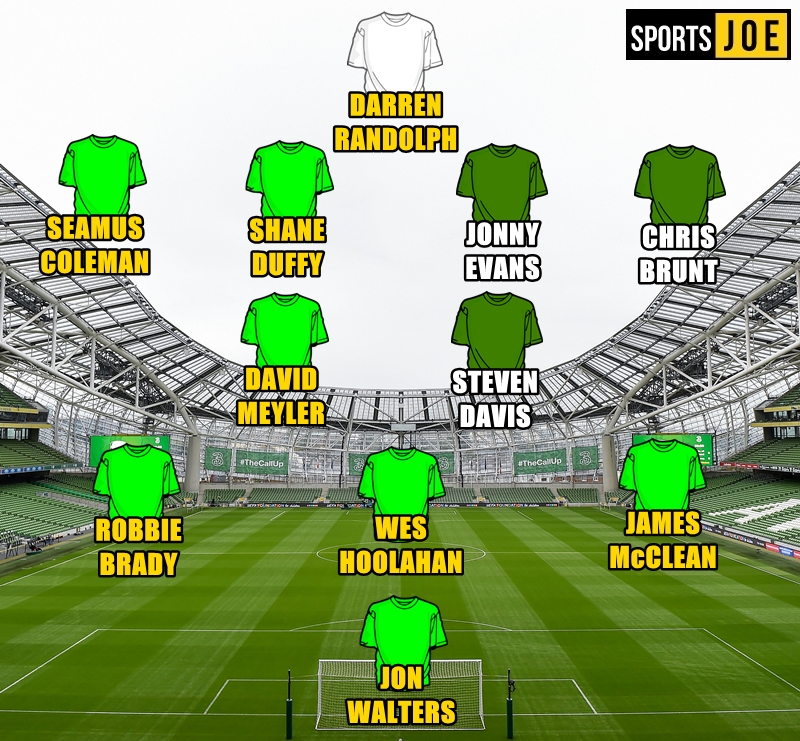 In goals, it was really only a toss-up between Darren Randolph and Rob Elliot and, whilst the arguments might well be justified that Elliot is better and doing better at club level, he has yet to break into the Ireland team and make his mark on international football. Randolph is reliable and Randolph is good.

Seamus Coleman slots straight in at right back of course but Shane Duffy is the one to partner Jonny Evans at centre half. Gareth McAuley might be on Northern Ireland's greatest ever XI but he's hardly in his prime anymore and Duffy is just getting bigger, bolder and better. Christ Brunt is at left back and, whilst Stephen Ward can definitely feel hard done by because he has been very, very good for Ireland in the past few seasons, Brunt has one of the best deliveries in the Premier League and he needs to be accommodated.

David Meyler, the new interim captain of the Republic, is on fire and, do you know what, he's actually just remarkably consistent. You know what you get from him, athleticism, anticipation, driving box-to-box play. Steven Davis is a lovely little footballer and, if the north make it through the playoffs, his 100th cap will be in the first World Cup clash.

Robbie Brady could fit anywhere on this team, Wes Hoolahan is the one knitting everything together and James McClean would probably be the top scorer of the operation.

In attack, there are a lot of players at the same level without anyone really standing out but Jon Walters is a big game player who has done it for Ireland when they've needed him most. With that midfield behind him and Chris Brunt whipping glorious crosses into him, he'd be the best candidate to lead the line.