After weeks of organisation, consultation and lobbying with the GAA, the Liam Miller memorial match will take place in front of a sold-out Páirc Uí Chaoimh in Cork.The mission objective was achieved.

Confirmation of a sellout at the 45,000 seater stadium represents a dramatic turnaround for match organisers who were told by the GAA only last month that the use of the ground was prohibited under the association’s controversial Rule 42, which bans the use of stadiums – excluding Croke Park – for other codes.

The GAA released a statement on calls for the match to be played at Páirc Uí Chaoimh and claimed that only a change at next year's annual Congress could allow the game to be played at the home of Cork GAA and that the association had sought legal advice around funding of the ground.

The GAA released that particular statement on a Friday afternoon and the reaction was swift.

Former Ireland international Andy Reid labelled their decision as 'scandalous'. Paul McGrath said that the whole situation was sad and disappointing. Damien Duff called some of the top brass within the organisation 'fucking dinosaurs', and made it clear to reporters that he wanted that message to be relayed to readers. His sentiments were not lost on social media either.

There's a lot of pitfalls with social media but the sheer volume of responses - from fans, pundits, former players and prominent media members - in reaction to the GAA statement spearheaded a desire for change.

The use of social media in the GAA is generally a murky subject and it once again came under the spotlight earlier this month after a string of managers including Eamonn Fitzmaurice, Micheál Donoghue and John Kiely spoke of the personal abuse they, and indeed their players, suffered over the last few seasons.

We've heard stories in the GAA of referees contemplating suicide after online abuse. We've had Colm O'Rourke calling on An Garda Siochána to intervene in 2015 when his nephew Paddy received a torrent of hateful messages after he was red-carded during a Leinster semi-final. We've had Galway hurling coach Noel Larkin calling for government assistance on the issue. 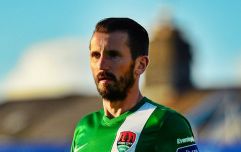 END_OF_DOCUMENT_TOKEN_TO_BE_REPLACED

The uproar caused panic at Croke Park. The GAA released a statement on July 19 stating that the issue would be reviewed at next year's congress.

By July 21, the Official GAA Twitter account had confirmed that 'the GAA President [John Horan] and Ard Stiúrthóir [Tom Ryan], along with representatives of the Cork Committee, would seek a meeting with the organising committee of the Liam Miller Tribute Match to discuss issues around the game'.

On July 25, the GAA released a statement confirming that the aforementioned meeting took place and that the association would consider the proposals discussed, and by July 28, the association had confirmed that the match would go ahead at Páirc Uí Chaoimh and that there would also be a GAA event as part of the occasion.

On a Friday afternoon in July, the GAA refused the match and said the situation would be reviewed in February and no more than 11 days later and they had opened their gates to two legends teams raising money for the family of a former Ireland midfielder and for Marymount Hospice, the facility where Miller ultimately died.

Online polls during the period between GAA rejection and approval showed that 95% of voters were in favour of the game being played at the 45,000 seater in Páirc Uí Chaoimh, and not the 7,000 seater located at Turner's Cross, while president Horan admitted that the social media frenzy around the match contributed to the GAA's u-turn. 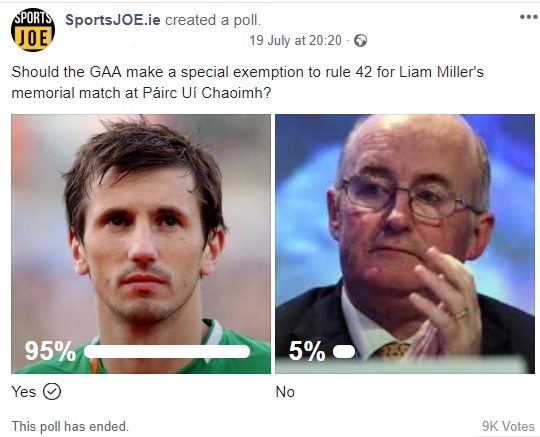 "We sat down with the organising committee last Tuesday with a view to resolving the issue," Horan told RTE Radio One after the game had been confirmed for Páirc Uí Chaoimh.

"I think if you look at it, from Tuesday this week to Saturday morning that we got our Management Committee, that were due to meet last night, and we gathered the volunteers that make up our Central Council committee this morning in Croke Park to make the decision. I don't think anyone can say Tuesday to Saturday was a long time.

"I think we dealt with our business in a very appropriate manner and with haste but not too much haste. I think we're in a different era. I think social media and all these other elements that fed into it really turned the whole thing into a frenzy. That's the life we live in at the moment."

Last year, the GAA’s director general Páraic Duffy said that the association would not be run on what was or what wasn't said on Twitter, and just over a year later and the GAA's new president is talking about just how much social media and all the other elements that go along with it really turned the coverage concerning the Miller match into a frenzy.

Social media was undoubtedly a contributing factor in the GAA's reversal but Miller's former teammate Roy Keane must be given credit here for rounding up a lot of high-profile former teammates and for facing up to the media to promote the event.

As someone that has sat through Irish football press conferences in the past where Keane has ripped through reporters for asking questions about his contract or is an upcoming qualifier with Germany 'a must-start game for John O'Shea?', I think it's fair to say that he hasn't always enjoyed or relished the prospect of sitting down in front of the media and answering questions, but Keane has been a big driver in this Liam Miller memorial match.

He has often been the public face for the organising committee, he has offered himself up for interview on multiple occasions and he summed up why this event has received so much traction in a way that maybe only Roy Keane can.

"The reaction I got from the United lads tells you all about what the game's about and you've got to try and help each other and if you can't go out of your way to help an ex-teammate then I don't see the point of being on this planet," he said on OTB AM.

The fact that Ryan Giggs, Gary Neville, Paul Scholes, Rio Ferdinand and Denis Irwin all committed to the match tells you what the game is about, and maybe just how much respect Keane still holds among his former teammates, but the fact that the Irish public put their foot down behind the organising committee and helped drag a memorial match from Turner's Cross, through the guts of the GAA and on to a sold out Páirc Uí Chaoimh, probably tells you more about the power of the people.


popular
Jose Mourinho is the picture of happiness and health after Spurs sacking
In 86 seconds, Patrick Bamford becomes English football's voice of reason
Springboks legend Tendai Mtawawira tells us what he really thinks of Ellis Genge
'Make him hurt, make him yours' - How the Springboks ruled the world
'Beast' Mtawawira is a big fan of Mike Ross' Lions front row
Jose Mourinho is about to step up and become the hero football needs
"We did find him hours later and we made up." - How Flynn and his best friend came to blows in Croke Park
You may also like
2 years ago
After the year the GAA has had, complaint about Liam Miller match is another level
2 years ago
Liam Miller match showed the impact he had on his teammates and the people of Cork
2 years ago
Roy Keane's reception at Páirc Uí Chaoimh was something else
2 years ago
WATCH: Liam Miller mermorial game live from Páirc Uí Chaoimh
2 years ago
Alex Ferguson pays tribute to Liam Miller on the day of his memorial match in Cork
2 years ago
Here's how you can watch and support the Liam Miller match if you haven't got a ticket
Next Page