"I remember when I was a kid, in the stands. I was speechless then and I'm still speechless now."

Trent Alexander Arnold is Liverpool through and through.

Up until recently, Alexander Arnold was still living at home with his mum. 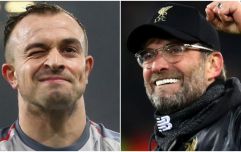 END_OF_DOCUMENT_TOKEN_TO_BE_REPLACED

The 20-year-old was already well established in the Liverpool squad and had made his England debut, but he was in no rush to move away from his family and friends.

"The family and friends and the people I surround myself allow me to keep my feet firmly on the floor and not get too big-headed," he said.

That all changed, earlier this season, but he did not move far. His new pad is close to Liverpool's Melwood training centre.

He has been in Liverpool's underage system since the age of six, and his first contract was offered to him when he was 'eight or nine'. Making waves now as a defender - albeit an ultra-attacking one - his early heroes were Steven Gerrard, Xabi Alonso, Fernando Torres and Thierry Henry. 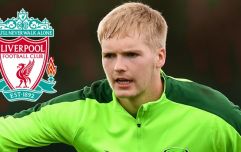 Caoimhin Kelleher called into Liverpool squad for trip to Belgrade

END_OF_DOCUMENT_TOKEN_TO_BE_REPLACED

The Liverpudlian missed out on starting the first leg, at Camp Nou, but was thrust into action from the start. Barcelona were in town, his town, and they had a three-goal advantage that needed erasing.

Nearing the 70-minute mark, the scores were level on aggregate. Divock Origi and Gini Wijnaldum, twice, had scored to make it 3-3. Liverpool were the only side pressing and pulsing forward for the killer blow. 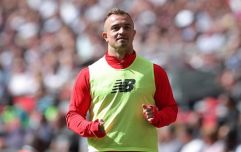 END_OF_DOCUMENT_TOKEN_TO_BE_REPLACED

A foul on the left wing by Nelson Semedo, on Sadio Mane, gave Liverpool a free-kick in a promising position. Rather than swing the ball into the box, for the likes of Wijnaldum and Virgil van Dijk, Alexander-Arnold received a pass and fizzed a long-range shot well wide and well over.

Van Dijk gave him both barrels as he ran back to his own half. But such is the confidence of the young fullback that he took another big gamble, 10 minutes later.

A corner kick on the right-hand side and Xherdan Shaqiri trotting over to deliver an inswinger... Alexander-Arnold saw Origi unmarked and fancied it. Quick pass, smart finish, 4-0.

That was the killer blow. That was also the second Alexander-Arnold assist on a night when he gave Jordi Alba the mother of all chasings.

Alba was reduced to a quivering wreck by the end of the match, simply unable to keep up with the Liverpool tyro.

No Liverpool player saw more of the ball, all night, than Alexander-Arnold and few did as much ransacking damage. When the full-time whistle sounded, he was one of the first players sought out by Jurgen Klopp for a bear-hug. The first of many.

Liverpool's players converged on The Kop for a sing-song, and to soak in the adulation, for 10 minutes after the game. When the squad finally made their way off the pitch - with Anfield still bouncing - one player was left.

As a youngster, Alexander-Arnold had sat and watched, in The Kop, the Centenary Stand, Anfield Road End and Main Stand. Wherever he was lucky enough to get a ticket.

He had not forgotten the rest of the fans that had wailed and urged their side on to a remarkable victory. Reds supporters repaid his gesture in boisterous kind.

Alone on the Anfield pitch.

Back in the Liverpool dressing room, as the enormity of what he and his team had just achieved sank in, he was lost for words.

Head in his hands, he reflected on a night that will go down in Liverpool 'lore.

🎥 | Inside the dressing room at full-time with the boys...