The Republic of Ireland are far from blessed with creative talent.

It sure is a blinking inconvenience that our two best players play in the one position but in the current state of affairs, even a slightly uncomfortable Matt Doherty would be an improvement.

The Wolves right back didn't see a minute of Ireland's two Euro 2020 qualification games in the last week and RTÉ soccer pundit Liam Brady believes we should have done everything, anything, even just to shoehorn him in.

Granted, it's going to be next to impossible for the Dubliner to usurp a now fully fit Seamus Coleman but when you consider the problems this fella caused some of the best Premier League defences this year, that midfield proposition is surely worth a go.

His first touch and his dribbling is sharp and if his passing is any relation to his crosses he'd do a job in the engine room.

Liam Brady knows a thing or two about creative midfield play and the former Ireland international had his say on the Doherty subject after the game. 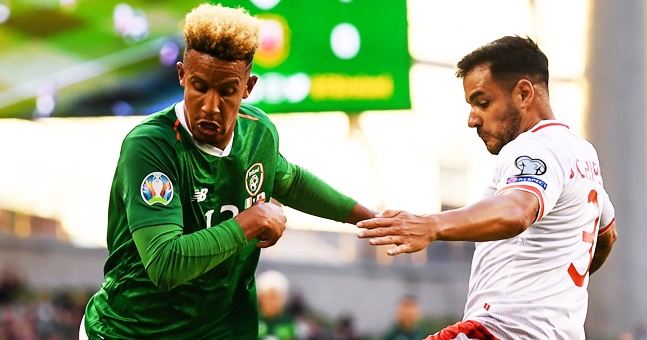 Robinson, Coleman and McGoldrick the only ones to impress as Ireland struggle

"A playmaker...we just don't have one. That's our lot really. There has to be improvement but unfortunately for Mick - he took over after the Nations League so he had very little time to work with anything, but again I'd like to have seen Doherty playing tonight (in midfield) to see if he could play..."

Brady would have replaced Jeff Hendrick.

"Hendrick over the two games against Denmark and tonight was anonymous, we didn't see him. That was an opportunity for me that was missed to see if that lad can play midfield because, take Coleman out of the equation it's probably Doherty who's our best player...Is that lad only going to play when Coleman's injured or Coleman's suspended...I think that's a bit unfair..."

Ireland will head into the summer on top of the table but there's plenty of work to be done if we're going to stay there.

"If we don't improve a lot, to expect us to take points off Switzerland - home and away or even to Denmark here, it's going to be a tall order. We've got a platform to do it but we have to improve dramatically," added Brady.


popular
Conor McGregor demands apology from ESPN pundit over Cerrone comments
Kerry vs. Dublin ends in meleé, and a draw
Two giants rise above the fray
Wexford trailblazers go down but father and son show why club GAA is best
David Clifford leaves Dublin for dead to score sublime goal
Charlton want Troy Parrott on loan until end of the season
Ante-post Cheltenham chances to get stuck into before it's too late
You may also like
4 weeks ago
Republic of Ireland team of the decade
1 month ago
Can you name the 50 Irish players to score 5 or more Premier League goals?
2 months ago
Kenny plays down half-time speech as Sweden stunned by Irish comeback
2 months ago
'I don't see what Jeff Hendrick did that Jack Byrne couldn't have'
2 months ago
Mick McCarthy and the value of players who do as they're told
2 months ago
Expect Ireland to make just one change for Euro 2020 playoffs
Next Page