Stoke City manager Gary Rowett has revealed that abusive packages have been sent to the club addressed to winger James McClean.

McClean was abused by a section of fans following the Potters goalless draw with Middlesbrough last weekend for his refusal to wear the poppy and the Derry native sounded off on the FA for what he perceived was an inadequate attitude in dealing with sectarian abuse.

Rowett told the BBC on Thursday that abusive packages had been sent to the club and that he can understand McClean's frustrations in some parts.

END_OF_DOCUMENT_TOKEN_TO_BE_REPLACED

"He's been sent stuff which I've seen," Rowett said. "You can understand in a way why he reacts. He's only human.

"When you have those beliefs you appreciate that it's going to be a big situation at the weekend like that.

"We spoke to James about it and I think his response was out of frustration, probably ill-judged.

"Certainly criticising a minority of our fans is not the way to go and we spoke to him about that. We can't condone that but I think when you understand the background to his beliefs and you see that his family have had death threats, you see that his wife and kids have had abuse constantly, you see that he's been sent stuff in the post, which I've seen recently from fans and you can understand, in a way, why he reacts.

END_OF_DOCUMENT_TOKEN_TO_BE_REPLACED

"We can't condone certain parts of those actions but we can understand some parts of it because the abuse is pretty pretty bad. We will try to move forward. The club have spoken to James about it. It's certainly not something that we want to condone." 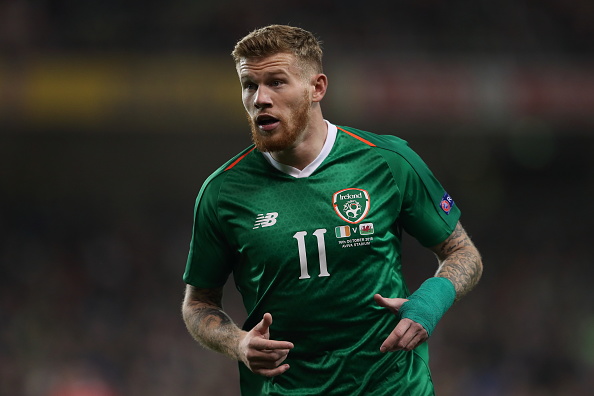 Erin McClean, partner of Republic of Ireland and Stoke winger James McClean, has revealed some of the abuse that her husband has received on social media.

McClean has been a subject of abuse for his entire career in England and wife Erin revealed just a sample of some of the messages he's received in a recent post on her Instagram account.

Some of the nicer things said...


popular
Jamie Carragher on the two Man United players Erik ten Hag can't trust
"I went up to the Italians and gave them a big auld shoulder" - Paul O'Donovan does it again
Man United have 'decided to sell' promising midfielder James Garner
Wexford Under-20 lights it up as Ferns win their first ever county title
Wexford, Waterford and Kilkenny down some good men as Australia calls
Graeme Souness under fire for calling football a ‘man’s game' while sat with Karen Carney
Luke Chadwick recalls furious Alex Ferguson reaction when he rejected loan move
You may also like
6 days ago
"I remember just hugging this Irish guy" - How one Kiwi rugby star reacted to Ireland's historic series win
2 weeks ago
Eight Ireland players make final cut in 'World Class' 33-man squad selection
3 weeks ago
The Top 20 rugby players in Ireland, right now
3 weeks ago
Six Irish players make damn impressive 'World XV' that would take some beating
3 weeks ago
The frontrunners for Ireland's 33-man squad for the 2023 World Cup
3 weeks ago
All Blacks media manager explains why Ian Foster appearance was cancelled after Ireland defeat
Next Page