"It's disappointing that I can't finish it off."

Stephen Kenny is the new man in charge, but he would have taken little pleasure in seeing how his predecessor had to step back, and away.

No-one wanted to see Mick McCarthy's second stint as Republic of Ireland manager finish like this - with a bottled YouTube interview by the FAI confirming he would be stepping down with immediate effect.

McCarthy came into the Ireland job 18 months ago and, had he guided his side into Euro 2020 via the playoffs, he would have walked off into the sunset on July 31. Instead, with the Coronavirus pandemic causing major disruptions and the championships now becoming Euro 2021, McCarthy walked off to the kitchen to make a fresh brew.

No longer the Ireland manager but a reported €1.1 million better off after the sort of golden handshake that this country has long made an art-form of.

"These are extraordinary circumstances for all," said McCarthy in his signing off address. "Good luck to Stephen Kenny. He’ll get a chance to qualify and I feel I’ve left him with a healthy balance. I said when I got the job I’d be gone by July 31st; it’s just been brought forward a little."

McCarthy's assistants Terry Connors and Robbie Keane are expected to move on, too, despite Keane being contracted up until the summer of 2022. The former Ireland striker may be willing to stick about but new boss Stephen Kenny is expected to bring in Damien Duff and Keith Andrews as part of his back-room team.

Kenny has coached his last game with the current crop of Ireland U21s and his first senior fixture(s) involved may be to try and steer his country through the Euro 2021 playoff games, starting with Slovakia away. He would dearly love a friendly fixture in advance of that but may have to go off training sessions alone, whenever regular football does resume.

Through his time with the likes of Longford, Dundalk and Ireland U21s, Kenny has shown that he wants his team to get the ball down and pass it about. To trust their attacking instincts yet all pitch in and work together for the greater good.

In a November 2018 interview with The Irish Times - not long before was was announced as McCarthy's eventual successor - the Tallaght native commented:

"Do I think that I could take charge of the next generation of Irish players and turn them into a really cohesive team; combining the best virtues of Irish sides – the honesty, work-rate and passion that we’ve shown down the years – but introducing a more European style of play, a more fluid and expansive way? Yes, I do."

Kenny has opted for 4-3-3 formations with the U21 side for most of the recent European Championship Qualifiers and his players bought into it. It will be interesting to see who the new Ireland boss promotes to the senior set-up.

Looking at the squad he named for the drawn game against Italy, last November, it is not a stretch to suggest six or seven of Kenny's former U21s could be in the mix for the Slovakia game:

Elevating four attacking players to the senior squad may seem like a stretch but Ireland are not exactly stacked in the goalscoring department. Parrott, Connolly and Obafemi all have senior caps while Idah was forcing himself into the picture with Norwich when the season came to a halt.

Kenny may not upset the apple cart too much if the play-off eliminator against Slovakia gets to be played in the summer. Expect a couple of changes from the side McCarthy would have leaned towards, but nothing too drastic.

Jayson Molumby and Jack Byrne could be brought in to freshen up the midfield and add some drive, with James McCarthy coming back into the starting XI, while Matt Doherty could nudge out current captain Seamus Coleman. 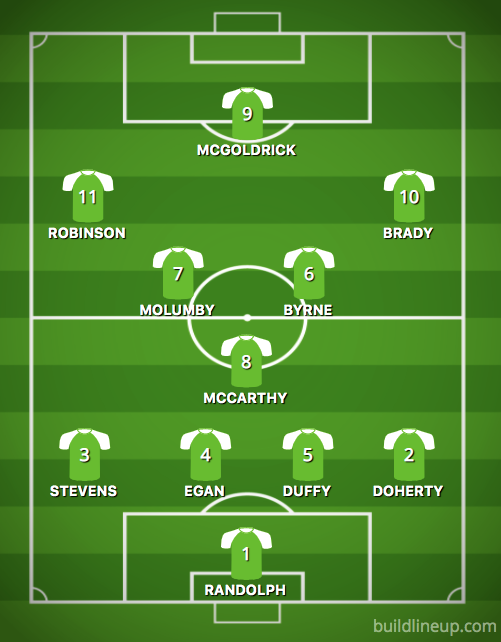 Aaron Connolly is another option on the right or left-hand side of Ireland's attack while someone like Jeff Hendrick may benefit from the fresh input of Stephen Kenny. We've gone with Brady on the right wing as we feel Kenny can spark some life into the Burnley midfielder.

By the time the Nations League - or whatever Uefa choose to do with that given the impending fixture back-log - expect Kenny to have made significantly more changes. By the year's end, we may even see Ireland line up something like this. 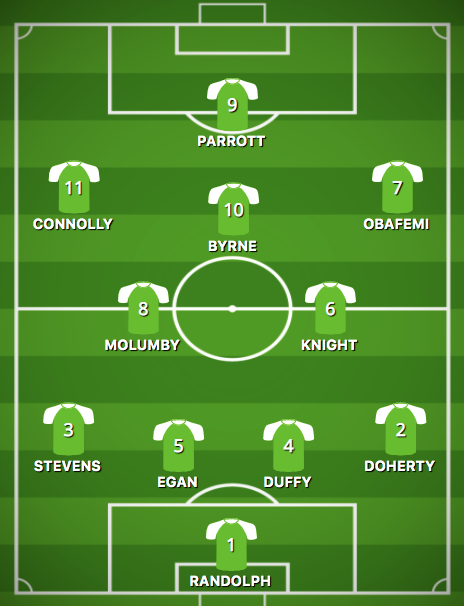 For Kenny, the road to Euro 2021 will all depend on a fast start otherwise it will see change happen quicker as he gears Ireland up for a tilt at reaching the 2022 World Cup.