It's been a long time coming

Tottenham, after months of speculation, have finally tabled a bid for Jack Grealish.

The midfielder has been repeatedly linked with a move to Spurs (and other clubs) since Aston Villa missed out on promotion back to the Premier League at the end of last season. 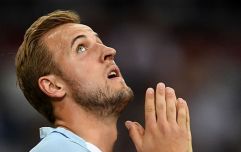 END_OF_DOCUMENT_TOKEN_TO_BE_REPLACED

Now, with under 48 hours of the transfer window remaining, the London club have opened the bidding. According to the Telegraph, Spurs have offered £25m for the 22-year-old who is said to be keen to make the move in order to play Champions League football.

Wrote this about Jack Grealish yesterday. Afterwards, he had 95% passing, an assist and seven fouls against him during the win vs Hull. He's a special player, whether you like him or nothttps://t.co/yVV8sqPopw

Although Villa have been in the second tier of English football for a couple of seasons now, it's unlikely their new billionaire owners will find a bid of just £25m impossible to turn down. With attacking midfielders going for near double that amount in the current market, it seems almost inevitable that the bid will be rejected.

As word of the bid did the rounds, it's clear plenty of football fans - many of them Villa supporters - felt it was way below Grealish's true value:

25 million for Grealish!! Is that all you’ve been stalling on. Pay them 30 and move on the next player. #THFC

Sorry but £25m is still a long way off the real valuation for Grealish. Surely he cant go for anything less than £30m. #avfc with no pressure to sell and if he does go then its key we get good money for him

Cheeky. Hes worth a lot more than that. Massive future ahead of him! #SkySports

Grealish is the best young player I've ever seen come through our academy. He's so different from the 'norm' and would be a great signing for any side; 25 mill is way below his true valuation. Let's hope we stay strong and keep him 🙏

Prior to their opening Grealish bid, Villa boss Steve Bruce revealed Spurs were "nowehere near" meeting their expected value for the player.

"There's been discussions and that's been going on all summer," Bruce had said. "The one thing the owners have made pretty clear is that no-one is for sale.

"We don't want to lose our best players, but they're aware of course that everyone has their price. The best thing the owners have been able to do is not let anybody go on the cheap.

"So if someone wants to buy our players, they're going to have to find a premium and make sure the owners are comfortable with it.


popular
Paul O'Donovan busts the cliches and leaves the mystery behind him in one more emphatic interview
Ireland's rowing heroes on what everyone was shouting as they beat Team GB to bronze
Next time someone doesn't cut you slack for commuting to training, show them Joe Canning's words
Warren Gatland with great response after being asked if he'll set up Twitter account
Donegal's Brendan Devenney responds to Jim McGuinness' claims about the game being "soft"
"Ah I suppose it's fine" - Paul O'Donovan and Fintan McCarthy are Olympic gold medallists
Rory McIlroy's true allegiance summed up in one text message to Justin Rose
You may also like
3 months ago
Jose Mourinho is the picture of happiness and health after Spurs sacking
3 months ago
Super League: Ensuring failure isn't an option for the cowardly cabal
3 months ago
Spurs get roasted by Dulux minutes after announcing them as official sponsor
3 months ago
Mourinho launches astonishing attack on Solskjaer in response to "conning" remark
3 months ago
Harry Kane expected to push fo Tottenham exit if they miss out on Champions League
4 months ago
Pierre-Emerick Aubameyang was dropped from Spurs game for being late
Next Page