A group of 'fans' broke into Sporting Lisbon's training facility and attacked its players, according to reports from Portugal.

The group managed to gain access to the locker room, where they allegedly attacked several players including Bas Dost, Josip Misic and Rodrigo Battaglia. Photos of a sizeable cut Dost sustained on his forehead during the incident have begun doing the rounds online. 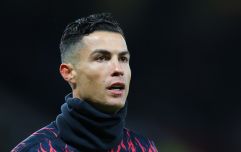 END_OF_DOCUMENT_TOKEN_TO_BE_REPLACED

It is also being reported that the intruders covered their faces so that they couldn't be identified and trashed one of the changing rooms.

Sporting Lisbon missed out on Champions League football under agonising circumstances on the last day of the Primeira Liga season. After drawing 0-0 with Benfica on the penultimate day of the campaign, they needed to beat Maritimo to have a chance at qualification.


popular
You'll be doing well to get 20/20 in this 2000s Gaelic footballers quiz
The return of Paul Mannion and Jack McCaffrey proves that Pat Spillane is wrong about split season
Peter O'Mahony riled by "petulant s**t" as Munster toasted by Dragons
55-year-old County Cork athlete beats Kaka in Berlin marathon to remember
Grim injury news for Seabelo Senatla after Bundee Aki's red card clear-out
The FootballJOE Pub Quiz: Week 55
Martin O'Neill doesn’t wait for a second invitation to settle an old score with Matt Doherty
You may also like
3 years ago
Cyrus Christie linked with surprise move to Sporting Lisbon
4 years ago
An upcoming election may decide John Terry's immediate future
4 years ago
Joe Hart could be set for another move across Europe next season
4 years ago
Manchester United and Manchester City tracking latest Sporting Lisbon wonderkid
5 years ago
Hull's new manager was once sacked for a truly bizarre reason
5 years ago
WATCH: Cristiano Ronaldo was once "knocked out" by a former Ireland defender
Next Page