McTominay isn't one of Man United's main problems, but the team needs an upgrade in central midfield.

Manchester United's issues are numerous, deep-rooted and long-standing. The problems are everywhere you look, from the owners to some of the players to even the club's social media strategy.

So, within this context, it may seem unfair to single out one player for criticism, particularly an academy graduate who appears to be trying his best.

END_OF_DOCUMENT_TOKEN_TO_BE_REPLACED

Yet, if Man United are serious about restructuring their squad, and moving on from their worst season since the 1970s, they need to take a cold hard look at all aspects of the club and the team.

And doing so could lead to an awkward conversation about Scott McTominay. 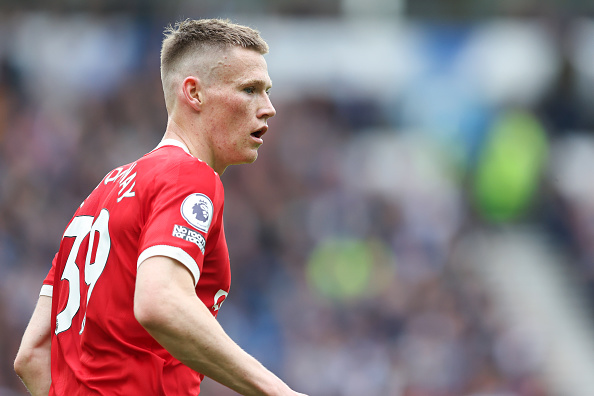 END_OF_DOCUMENT_TOKEN_TO_BE_REPLACED

McTominay is by no means Man United's biggest issue, as only David de Gea will emerge from this season with credit for his performances.

But the evidence from this season suggests that McTominay is not the long-term answer to Man United's midfield problems.

The 25-year-old often doesn't position himself in the right place to receive a pass, such as in the example below in the 4-0 loss to Brighton last Saturday, surely the club's lowest point of a miserable campaign. 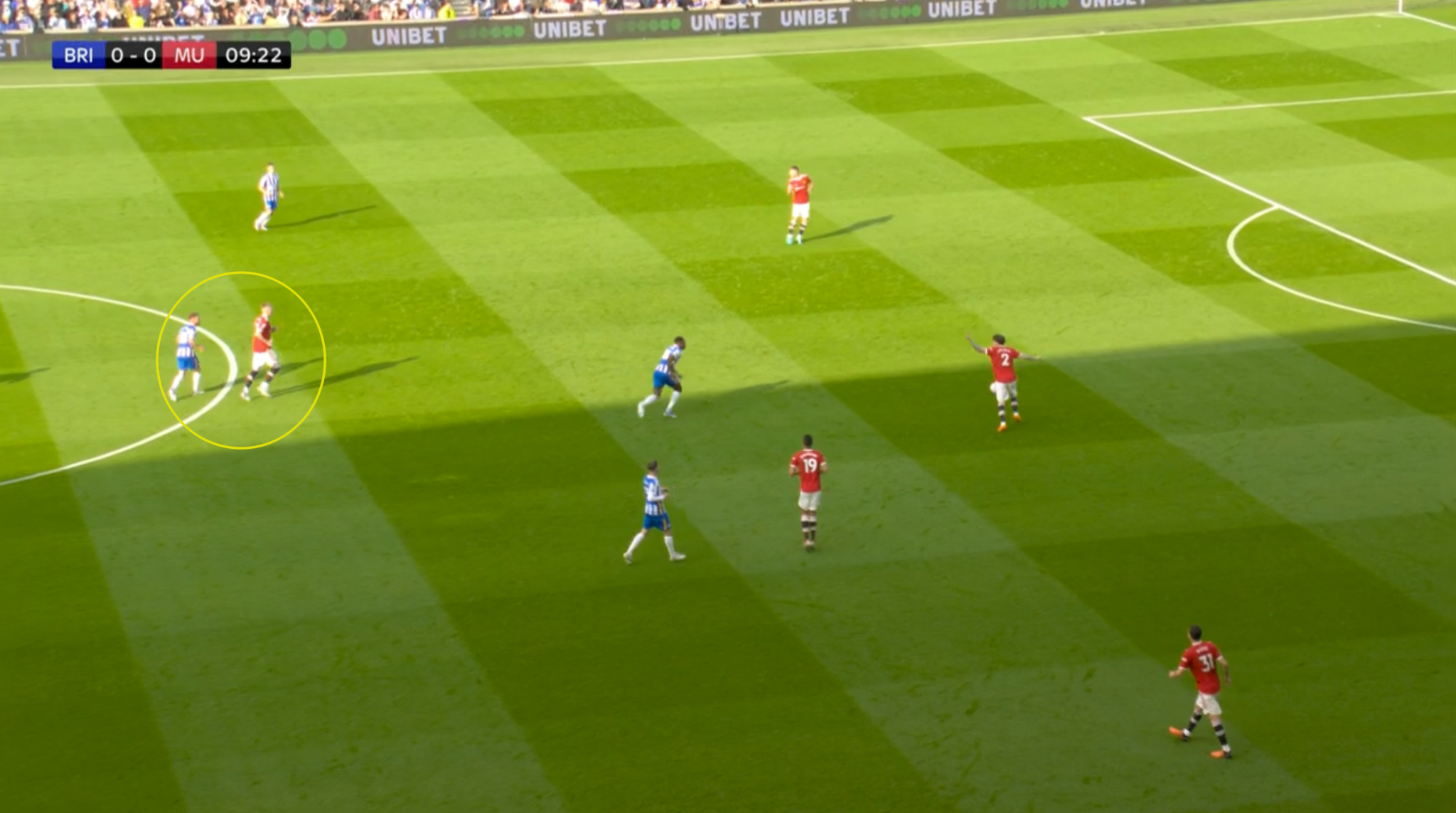 END_OF_DOCUMENT_TOKEN_TO_BE_REPLACED

Or in the example below when Brighton were dominating against Man United. The Red Devils needed to get a grip of the game to stem the home side's surge.

McTominay should have demanded that Diogo Dalot passed him the ball before taking it on the half-turn and getting his team up the pitch with a pass.

Instead, Dalot knocked the ball back to Victor Lindelof and within seconds Brighton had regained possession. 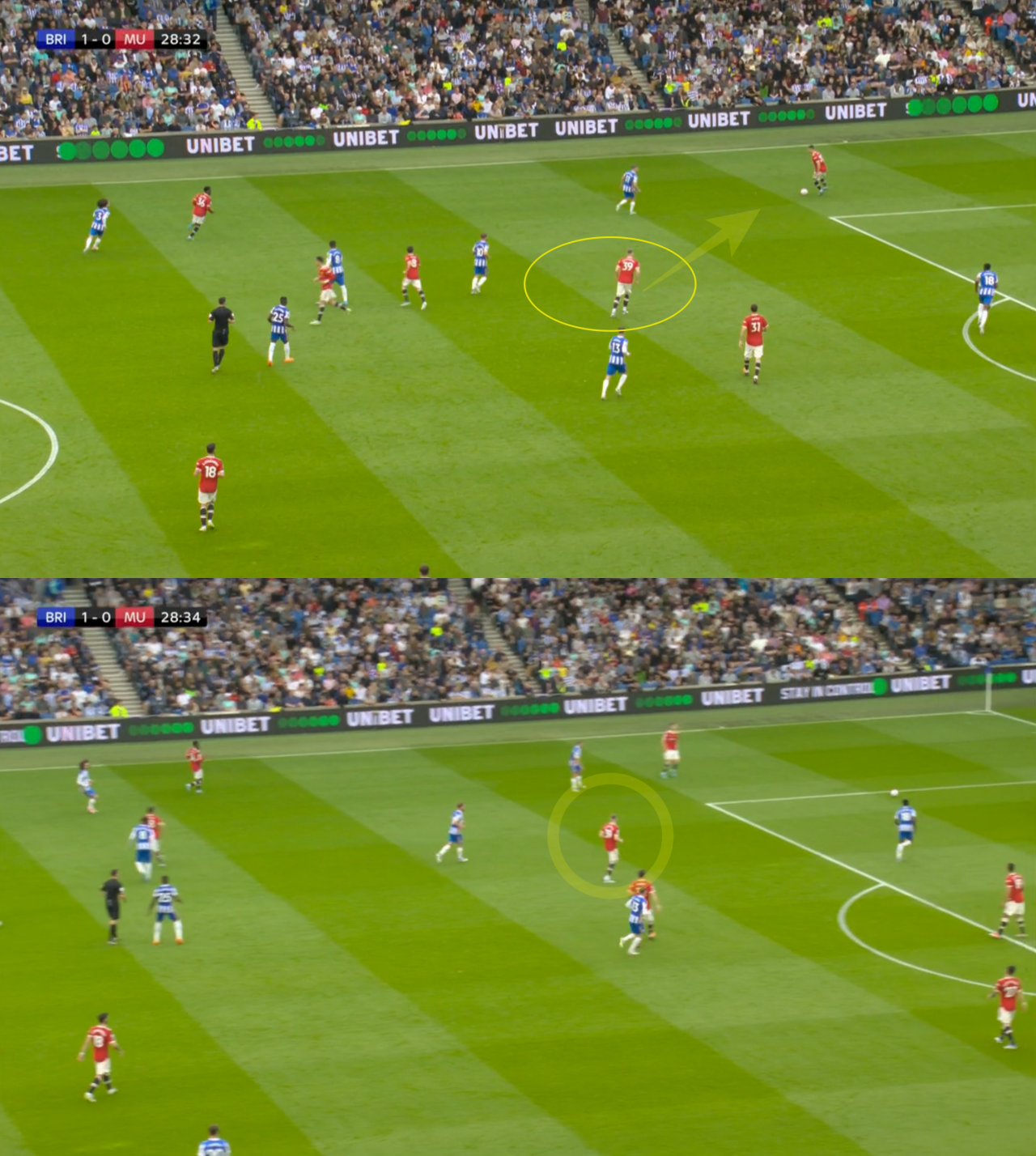 The 25-year-old has completed 85 per cent of passes this season and averages just four progressive passes per game. He also makes fewer passes than rival midfielders.

Man United transfer target Declan Rice, for example, has completed over 800 more many passes than him this season (1013 v 1865). 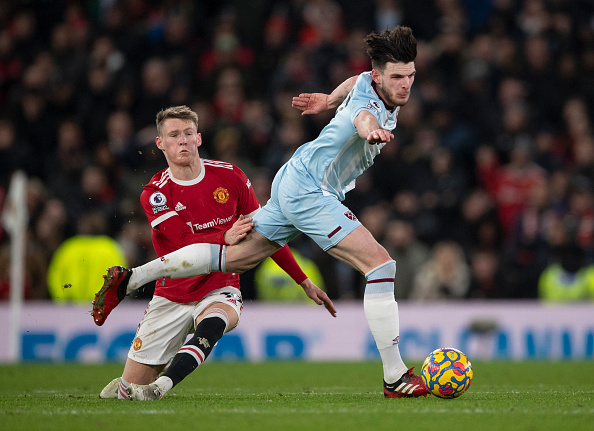 McTominay has made 197 passes while under pressure from an opponent. This is significantly fewer than Manchester City's Rodri (436). Liverpool's Fabinho, meanwhile, has completed 627 medium-length passes (passes between 15 and 30 yards), which is almost 200 more than McTominay.

If you feel that it is unfair to compare McTominay to these elite midfielders, you're not wrong. But his statistics don't stand out against some of the Premier League's lesser lights either.

James McArthur of Crystal Palace, for example, has attempted more passes per 90 minutes this season than McTominay (48.4 v 39.7). 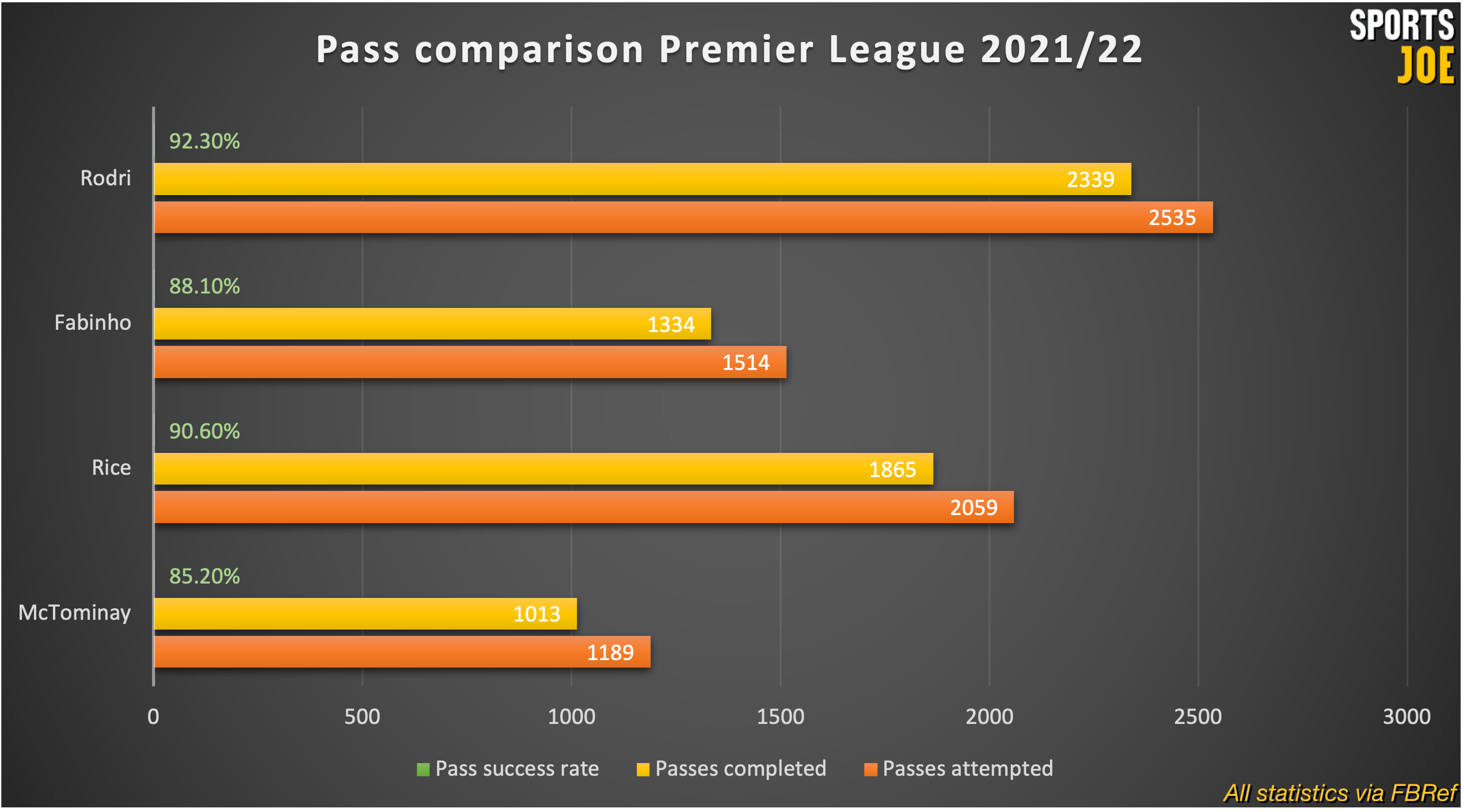 McTominay's passing statistics closely resemble Burnley's Ashley Westwood. The Scottish midfielder has averaged a similar number of touches per game this season to Westwood, who has a better short pass completion rate and has recorded more assists (three versus one for McTominay).

McTominay has completed more accurate medium and long passes than Westwood. Burnley, however, are the most direct team in the Premier League and Westwood has attempted over twice as many long passes this season (366 v 174). 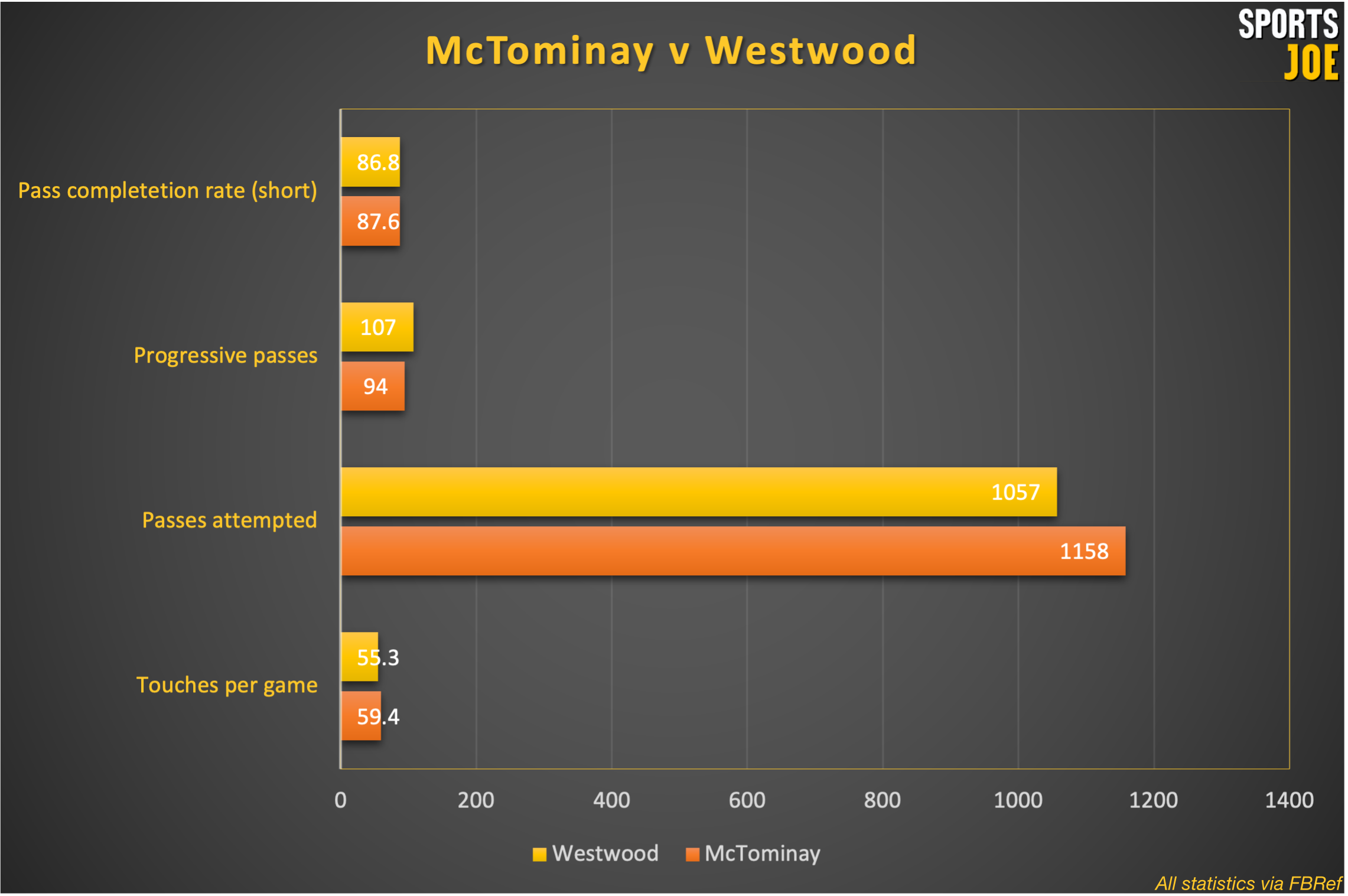 A dive into McTominay's defensive statistics offer little respite for the midfielder. He has won 33 of his 67 attempted tackles this season. Rice, for example, has won 49 of his 68 tackles.

Again though, we probably shouldn't compare McTominay to these elite midfielders, even if he plays for one of the world's biggest clubs. The Scot's defensive statistics resemble those of Burnley's Josh Brownhill. 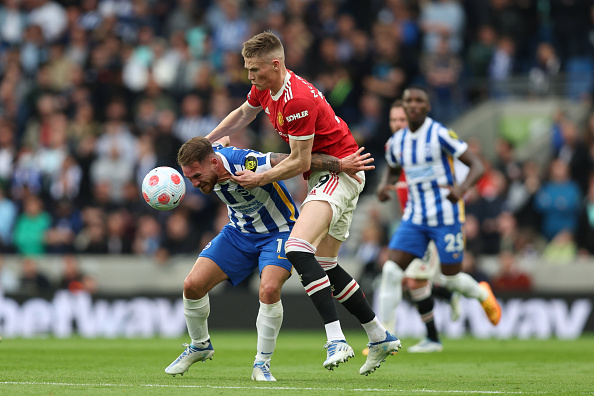 Brownhill has won 38 of his 65 tackles this season, of which 39 were in the middle third of the pitch. McTominay, meanwhile, has won 33 of his 67 tackles, of which 24 were in midfield.

And finally, the Scottish midfielder is committing fouls at a greater rate than his midfield peers. McTominay has averaged 2.12 fouls per game in the Premier League this season. This is more than Rodri (1.62), Fabinho (1.54), Rice (1.02), and the Burnley pair of Westwood (1.25) and Brownhill (1.5). 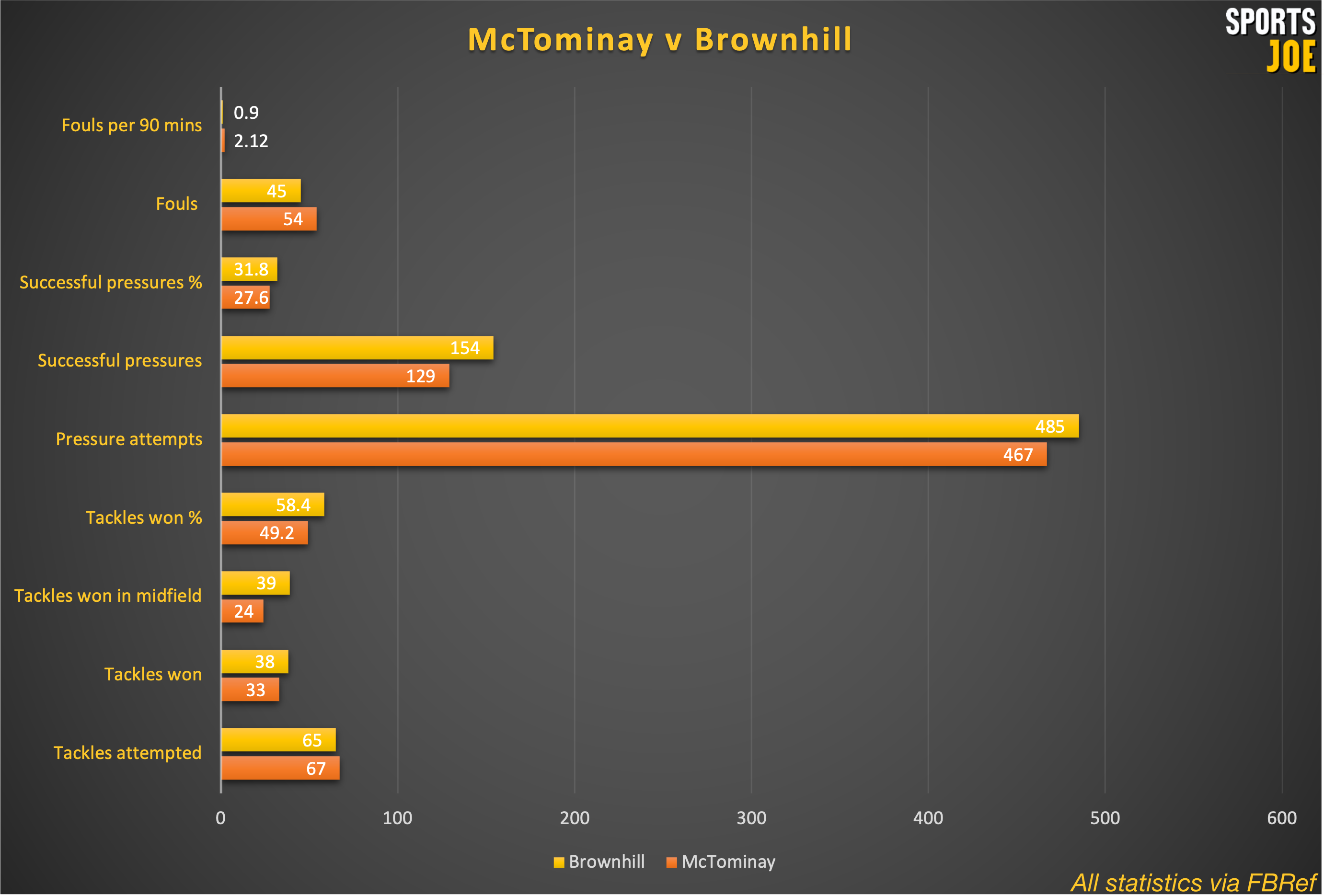 This says more about the dysfunctional condition of the club and their poor transfer business than it does the player, who is no doubt trying his best.

Man United, however, should not be relying on a central midfield of McTominay and Fred after spending close to a billion pounds on new players over the last decade.

The evidence from this season suggests that they need an upgrade on both. 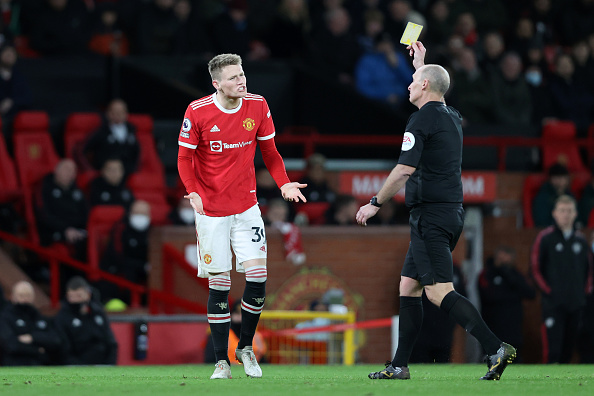 McTominay, like his teammates, appears to have been starved of top-level coaching for several years. So, it's possible that Erik ten Hag, the club's new manager, will help him improve.

However, at this stage of his career, it is unlikely that he will improve to the level required to be the club's first-choice midfielder. It could even be argued that Man United have been playing him in the wrong position.

McTominay has excelled this season in one aspect for central midfielders - aerial duels won. He has won 67 per cent of his aerial duels. This is more than Rice (63 per cent) and Fabinho (61.6 per cent). 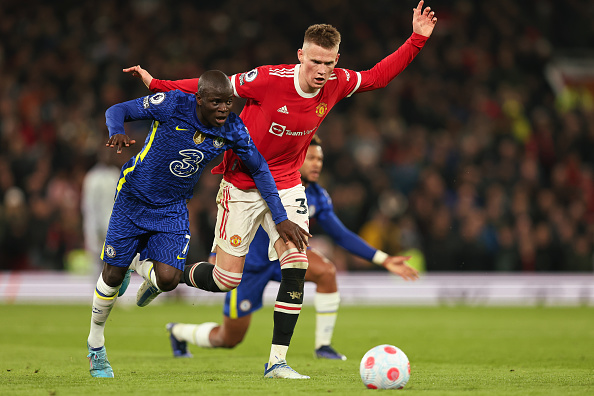 McTominay plays in a back three for Scotland, a position that appears to be a much better fit for him. He could possibly become a utility player and backup centre-back at Old Trafford. In truth, he may even be an upgrade on some of United's current central defenders.

However, if the Red Devils are serious about rebuilding their squad, they will begin the process in central midfield. This will mean having an awkward conversation that can't be put off any longer. It would be one thing put right at a club and squad littered with issues.

(All statistics via FBref).