United had been on the hunt for their first ever director of football for months before changing the title of the role to technical director and several names have been touted as candidates.

With recent reports stating that United's current assistant manager, Mike Phelan, will be offered the job, Keane made it known that it is not a position he would be eager to pursue.

"No, no, no," Keane answered when asked on Sky Sports if he would be interested in returning to Old Trafford in the capacity of technical director.

Roy Keane as a Director of Football at Man Utd? 🤔 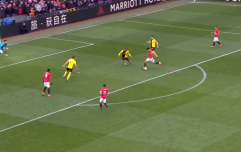 END_OF_DOCUMENT_TOKEN_TO_BE_REPLACED

"I hope and pray Ole does well, he’s a good guy. Like every other manager if he’s losing, he’s under pressure. He’s been a big favourite, and he’s got to win football matches.

"But he’s got to be given a chance by getting players in because clearly he’s got to get players out."

Recruitment has been one of the most significant problems for United in recent years and it's hoped that the new technical director will head up a revamp to the club's strategy for bringing new talent to Old Trafford.

The Telegraph also reports that former United midfielder Darren Fletcher is being considered for a role which would involve the organisation of the club's scouting department moving forward.


popular
"Conor Murray was hung out to dry"
Kilkenny youngster pulls off the no-look hand-pass once more
Jarlath Burns: The club man going to the top so he can bring it all back
'Were they up for it more than us? That's my responsibility' - Andy Farrell
Guinness Pro14 preview: Leinster v Glasgow
Tyson Fury reveals what happened when he sparred Anthony Joshua
Jacob Stockdale and Johnny Sexton not spared by English press
You may also like
1 week ago
Carragher pushes all the right buttons and Keane delivers in gold
1 week ago
Harry Gregg: the goalkeeper who saved a family
1 week ago
Three players Solskjaer wants compared to three Man United are after
2 weeks ago
Nigeria watches on as Odion Ighalo's Man United dream begins
1 month ago
Woodward must "prove us all wrong", not Sanchez
1 month ago
Fall guy Solskjaer is not going anywhere
Next Page