'You are my soul, you make me as hard as a totem pole'

Poems written by ex-Manchester United star Ryan Giggs have been read out in court as his trial over alleged assault offences continues.

Evidence is expected to conclude in the trial on Friday, with Gary Neville and Alex Ferguson among the defence witnesses we have yet to hear from.

END_OF_DOCUMENT_TOKEN_TO_BE_REPLACED

The jury will continue to hear messages between Mr Giggs and his ex-girlfriend Kate Greville, whom he denies assaulting and coercing.

Among them, X-rated texts and gushing poems have been read out in which Giggs made grandiose proclamations of his love.

In one poem sent on New Year's Eve in 2017 the former Welsh international spelt out her name in a feeble attempt at an acrostic poem.

G is for gorgeous

R is for radiant

E is for extraordinary

V is for vivacious

I is for idolised, by me

L is for legs

L is for legs

E is for everything I've ever wanted

In others he praised her "abs" and the "pictures you send so I can keep tabs". 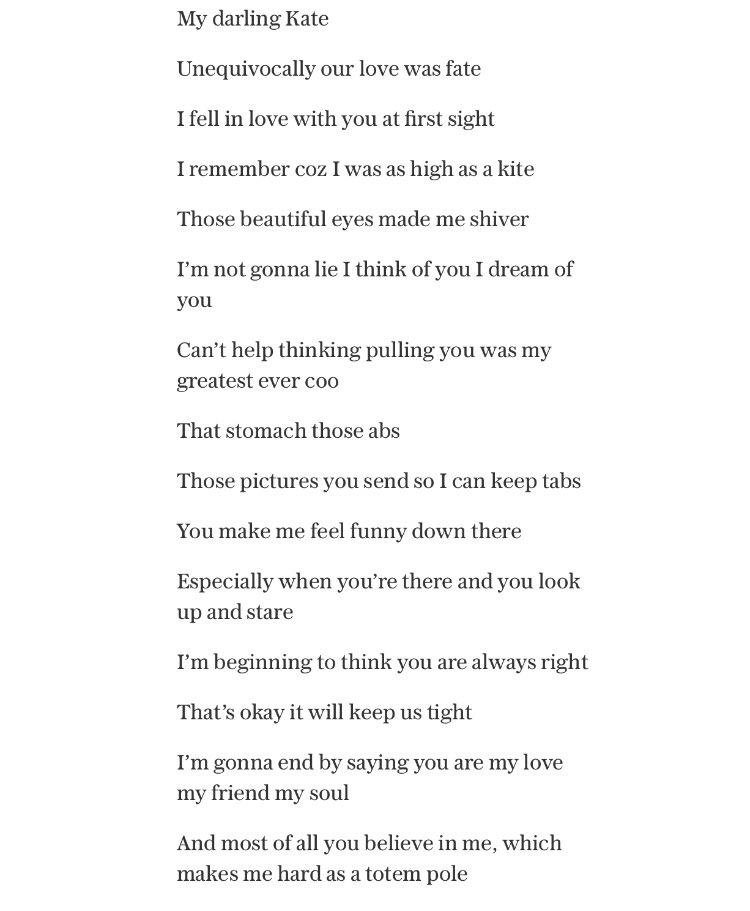 Ryan Giggs penned a poem to Kate Greville in response to a verse from her which included the line “every day you make me proud, because you’re well endowed”.

He then includes the line, "You are my love my friend my soul, which makes me hard as a totem pole".

"You make me hard as a totem pole" - a poem written by Ryan Giggs for his ex-girlfriend, which was read out at his trial yesterday. pic.twitter.com/6Xk9UxQrIA

Manchester Crown Court heard the father of two sent poems on August 31, 2017 – the day the coercive control is alleged to have started.

It was sent in response to a poem from Miss Greville in which she wrote: "You make my heart flutter because you are a nutter. Every day you do me proud not just because you are well endowed."

The court also heard how, during their 'toxic' six-year on-and-off relationship, Giggs wrote several texts making strong declarations of love, such as: "I love you to the next planet those clever f****** at Nasa finds. Plus all my Premier League appearances which is a lot. Love you baby."

In a series of more toned-down texts, Giggs also described Ms Greville as "my sunshine, my wish, my soulmate, my strength, my one and only".

The ex-Premier League star is accused of assaulting Ms Greville - who claims Giggs 'deliberately' headbutted her - during the incident at his home in November 2020.

He is also accused of assaulting Ms Greville's sister Emma - who was dog sitting on the night of the incident and who claims Giggs elbowed her after she tried to intervene.

Giggs denies the charges, as well as using controlling and coercive behaviour towards Kate during their 'toxic' six-year on-and-off relationship.


popular
Man United could be blocked from playing in the Champions League next season
Ireland team vs. France: Form players rewarded and a welcome return
Man United's four player transfer shortlist if Qatar takeover goes ahead
Clive Woodward happy to 'eat humble pie' after bold comments about Ireland
Man City expect Pep Guardiola to leave
The Ireland team Andy Farrell needs to start when France come to town
"I should have been more mature" - O'Sullivan's injury trail a cautionary tale for Sigerson casualties

You may also like
23 hours ago
Casemiro explains why his name has been spelt wrong his whole career
1 day ago
Man United vs Leeds: Why the game won't be shown on Irish TV
3 days ago
Erik ten Hag draws up three-player transfer wishlist for summer window
3 days ago
Man United ponder appeal as new footage of Casemiro red card incident emerges
3 days ago
Man United squad don't want Mason Greenwood back in changing room
4 days ago
Alex Ferguson on how Owen Hargreaves was 'one of the most disappointing' signings he made for Man United
Next Page