George Hamilton was never going to take his commentary being described as 'bitter' lying down, especially from someone going by the username @rocketman_

For many years, RTÉ pundits knew their role. They would watch major tournaments - more often than not with Ireland missing out - and see how the hype machine went into overdrive every time England strung together a win or two.

END_OF_DOCUMENT_TOKEN_TO_BE_REPLACED

While the likes of the BBC, ITV and the English tabloid press would whip themselves into a lather, summarily write off opposition teams and start plotting parade routes, the RTÉ crew would sit back, point out some potential weaknesses and wait for the implosion.

Inevitably, it would come.

In recent years, Roy Keane has been deployed to England to carry out a similar role. While Ian Wright and Gary Neville are giddy with a tight win over Colombia, Keane would be the harbinger. England need to up their game, he would warn, or they will be found out when it matters. Keane would be pinned as a curmudgeon.

Inevitably, he would be proved right.

END_OF_DOCUMENT_TOKEN_TO_BE_REPLACED

And so, many Irish football fans went into Euro 2020 expecting the same story to play out. The sense that England would not end their 55-year wait for a major trophy was only heightened when the likes of Jack Grealish, Jadon Sancho then Phil Foden were left stewing on the bench.

Gareth Southgate may have bent to the pressure to include Trent Alexander-Arnold in his squad - only for the Liverpool star to get injured - but he was sticking to his guns once the tournament kicked off. The masses had a collective wobble when they drew 0-0 with the Scots, but Southgate was not panicking.

Czech Republic were dealt with as England topped the group. They beat Germany in the same round as Portugal, The Netherlands and France were all dumped out. Suddenly, the only teams in the way of a place in the final were the Ukraine and Denmark, who had accounted for the Czechs in their quarter final. 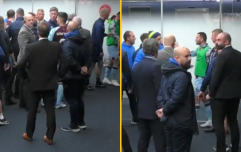 END_OF_DOCUMENT_TOKEN_TO_BE_REPLACED

On Saturday, in Rome, England were impressive as they put a beating on Ukraine. They went 1-0 up early but sat back and did not go for the killer blow(s) for the rest of the first half. In the RTÉ studio, Liam Brady compared it to a boxing snore-fest:

Liam Brady said that despite leading at the break, England have been a "hard watch" in this quarter-final against Ukraine. Second half just kicking off in Rome. #UKRENG #EURO2020 #RTEsoccer
📱 Live updates - https://t.co/tzjLQRWNIW
📺Watch Live - https://t.co/2W5kFtUgZE pic.twitter.com/6BmOW24wmM

While the BBC crew were asking Alexander-Arnold - dialling in from Spain - if football was coming home, the Irish pundits were warning that England needed to find that second goal to avoid a nervous finale.

Ahead of the game, Damien Duff had declared, "I've never been more sure of anything than of Ukraine losing to England." The general consensus, at Montrose, was that Ukraine were not going to test this star-laden English side.

So it proved. Two early goals in the second half ended the game as a contest. England were 4-0 up with 27 minutes to go and the Ukrainians were even giving run-outs to lads that had yet to play in the tournament.

In the commentary booth, George Hamilton was praising England as much as lamenting Ukraine playing five at the back and still leaving oceans of space for Harry Kane and Harry Maguire to score.

RTÉ commentator George Hamilton summing up the mood of Ireland after England go 3-0 up
“and that’s surely that as far as entertainment goes….”
and then ruining everything by adding
“unless England go on to score more”.

George Hamilton and Stuart Byrne SLATING England for playing out the game slowly while they are *checks notes* 4-0 up.

At the end of the game, with England now in their second major tournament semi-final in three years, the RTÉ lads acknowledged a clinical England performance while Didi Hamann praised Jadon Sancho and told Manchester United fans they had got a good one.

Liam Brady was disappointed at how "tired" Ukraine looked. Given that Andriy Shevhenko's side had criss-crossed Europe for their four previous games - Amsterdam, Bucharest, Glasgow and Rome - it was a valid point.

As the dust settles, and England seek to reach their first final since the 1966 World Cup, Hamilton was not having any criticism that his commentary may have been overly negative towards the victors:

Gave them plenty of credit. Fact that they were gifted three of their four goals had to be acknowledged.

Don't you just love this. Brave enough to put the boot in, but not brave enough to say who you are. Pathetic. https://t.co/Ky1sTXyNJw

Hamilton will be back on the commentary beat for the semi-final against Denmark, on Wednesday.

For so long, we have observed the English hubris and awaited the fall.

This is a strange new world we Irish football fans are living in. The sight of Harry Kane lifting the Henri Delaunay Trophy in Wembley Stadium next week may well be the new normal everyone has been droning on about.

You may also like
19 hours ago
Amnesty say Newcastle's Saudi shirt 'clear evidence' of sportswashing
2 days ago
Robert Lewandowski tells Bayern bosses wants to leave, with Spanish club his preferred destination
4 days ago
Chelsea decided against Erling Haaland transfer after scouts 'raised concerns'
4 days ago
Picking the best sporting moment of the past decade is not simple
4 days ago
Jamie Carragher hilariously denied from seeing Steven Gerrard in tunnel at Villa Park
4 days ago
"That's what you call a f***ing legend" - Liam Gallagher on video encounter with Eric Cantona
Next Page