As part of their Premier League pre-season chat, Ian Wright and Roy Keane both agreed Liverpool and Manchester City are the teams to catch, but Spurs could lead that chase.

Wright and Keane were at the King Power Stadium on Saturday, as part of ITV's coverage of Liverpool's Community Shield victory over City. Before, during and after the game, Keane spoke of the goalscoring potential of Erling Haaland, despite him drawing a blank.

"A brilliant, brilliant player. Obviously he's at 22, a good age but he hasn't peaked yet. He's working with a great team now, brilliant manager and has all the attributes. You can't imagine him not scoring 20-odd goals; you just can't imagine it, if he stays fit. He has the right attitude. What a signing.

"Someone used the word exciting, there," Keane added. "That's exactly what this young kid is. A fantastic prospect and I'm looking forward to watching him over the next few months... he's a natural goalscorer. If he plays regularly, it's guaranteed goals."

END_OF_DOCUMENT_TOKEN_TO_BE_REPLACED

Keane believes Haaland will have to adapt his game to fit in with City's style of playing, but the fact that the deal was done early, the Norwegian speaks English and, through his father, has a connection with the club all helps with the bedding in process. 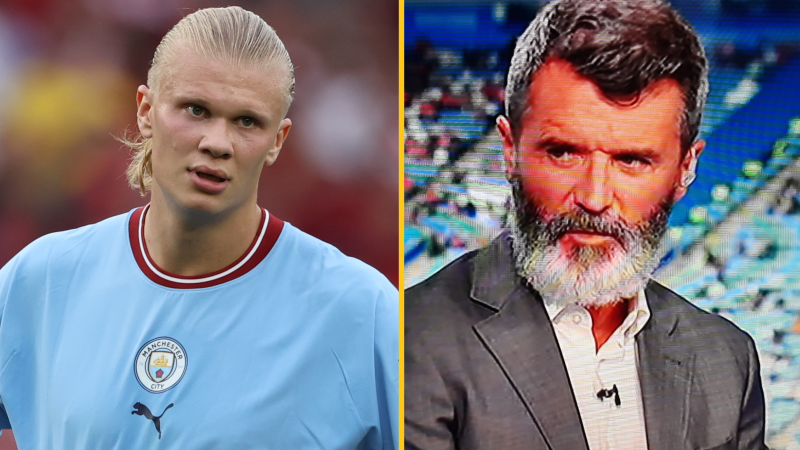 END_OF_DOCUMENT_TOKEN_TO_BE_REPLACED

The former Manchester United captain was asked for his opinion on City allowing Raheem Sterling and Gabriel Jesus to respective rivals Chelsea and Arsenal.

"I wouldn't doubt Pep's opinions on players," said Roy Keane. "He works with them closely. You've got to keep moving on and freshening things up. They've got good money for these players, who were brilliant players for Man City.

"Jesus really done well for City in the last few months [of last season], and Sterling's stats are fantastic. But, with Haaland coming in, Pep is probably thinking he wants to keep a hungry squad, and that's the name of the game.

"At this moment in time, especially with the money that was coming in for these players, City probably don't see those clubs, especially Arsenal, as a threat. Their big worry, at the moment, is trying to stay ahead of Liverpool. City and Liverpool are so far ahead of the other teams, Pep must have thought it was worth a gamble."

Ian Wright says Jesus is 'ready to go and be a main player' at a club like Arsenal. He mirrored the comments of Keane, that City 'are not worried' about Chelsea and Arsenal, and have 'massively upgraded' on Jesus with Erling Haaland.

END_OF_DOCUMENT_TOKEN_TO_BE_REPLACED

Host Mark Pougatch asked Keane and Wright who they backed to be the team pushing the top two closest in 2022/23. Chelsea did not get much of a mention while Keane was dismissive of Manchester United, despite their summer of outgoings and incomings under Erik ten Hag.

"I'd say Arsenal, but Tottenham have been going about themselves well, doing some silent, solid business. Man United, depending on if ten Hag can get them going and what's happening with Cristiano Ronaldo, I don't know.

"I think it'll be these two [City and Liverpool], then Arsenal and Tottenham." Keane commented:

"I'd say Spurs, believe it or not?

"Antonio Conte has made some big improvements. Spurs will be the side to push these two, yeah."

Asked about United, Keane quickly replied, "No, I don't see it. Hopefully they'll be able to put together some good runs."

Roy Keane backing Spurs to have a big season. It is a long way from when he gushed about an old Alex Ferguson team-talk, when the old Manchester United manager reminded his players, "Lads, it's Tottenham!" before another win over the Londoners.