Darwin Núñez was the Liverpool hero as the Reds won the Community Shield on a day Erling Haaland drew a resounding blank. Our full Man City and Liverpool player ratings have a big spread of sublime to ridiculous.

The opening stages saw both Mo Salah and Kevin De Bruyne have good looks at the opposition goal, but both efforts struck the side-netting. Andy Robertson wastefully headed into the side-netting, on 14 minutes, after a lovely ball into the back-post by Thiago.

END_OF_DOCUMENT_TOKEN_TO_BE_REPLACED

Liverpool definitely bossed the opening 20 minutes and Ederson was at full stretch to divert a dangerous Jordan Henderson cross before Luis Diaz could side-foot home. The Reds would not be denied for long, though. Thiago found Salah on the edge of the box before the Egyptian teed up Trent Alexander-Arnold to curl home, via a deflection off Nathan Ake.

END_OF_DOCUMENT_TOKEN_TO_BE_REPLACED

As the first half progressed, Manchester City started to dominate possession and craft a few goalscoring chances.

Erling Haaland drew a decent save from Adrian then met a cross with an outstretched boot when a simple header would have delivered the equaliser. Soon after, the Liverpool goalkeeper was less stressed by a low Riyad Mahrez effort.

On 40 minutes, Haaland wasted a good opportunity to get a shot away, after a heavy touch, before Mahrez went down too easily in the box and had his penalty appeal waved away. Jürgen Klopp, meanwhile, was livid that Joao Cancelo was not carded for a late challenge on Alexander-Arnold. 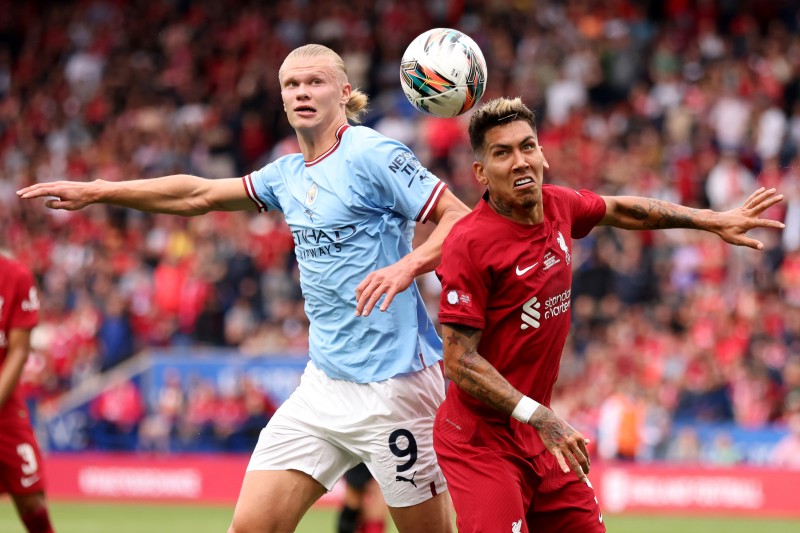 Roberto Firmino of Liverpool battles for possession with Erling Haaland of Manchester City during The FA Community Shield. (Photo by Marc Atkins/Getty Images)

END_OF_DOCUMENT_TOKEN_TO_BE_REPLACED

Manchester City were almost level after just a minute of play in the second half. Rodri picked out Mahrez, who cut inside Robertson, but he shot into the ground and Adrian parried away the bouncing ball.

On 58 minutes, Pep Guardiola replaced Jack Grealish and Riyad Mahrez with Phil Foden and Julian Alvarez. Klopp responded by replacing Roberto Firmino with Darwin Núñez, who had a penalty shout dismissed minutes after he entered the fray.

Núñez had a super chance to double the Liverpool lead, on 63 minutes, but Ederson did well to rush out and block the shot, at close range, with his face.

On 70 minutes, Phil Foden pounced on his own rebound after Adrian parried his shot. He beat the goalie to the bouncing ball and it broke to Alvarez, who thumped home. The goal was initially ruled out for offside but a VAR check corrected the error and it was 1-1.

Heading into the final 10 minutes and Núñez had a header strike the hand of Ruben Dias. Referee Craig Pawson was asked to look at TV replays and he eventually awarded a spot-kick that Salah blasted, low and hard, past Ederson.

Into injury time, Fabio Carvalho and Salah linked up, Robertson got up at the back post and nodded down for Núñez to finish with a diving header. Haaland had a great chance to pull a late goal back but clanged the crossbar from close range.

That goal sucked the life, and fight, out of City and it was Liverpool that captured the first trophy of the 2022/23 English season. 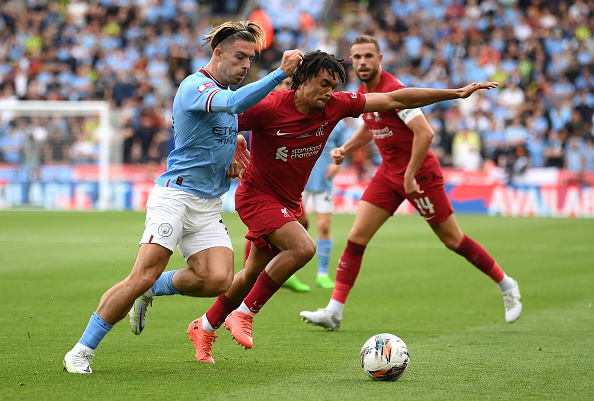 You may also like
6 days ago
Liverpool reportedly selling Caoimhin Kelleher for Jude Bellingham funds
1 week ago
Steven Gerrard offers his personal service to help Liverpool sign Jude Bellingham
1 week ago
Steven Gerrard makes interesting claim about Graham Potter's signings
1 week ago
Liverpool's owners have made a massive decision on the sale of the club
1 week ago
The best five-team accumulator weekend special for the Premier League
1 week ago
Gary Neville: "Jurgen Klopp is equal to or better than Pep Guardiola"
Next Page