Roy Keane reveals "the only reason" he left Manchester United

"Don't be brainwashed by the propaganda and lies."

Roy Keane's exit from Manchester United in 2005 has been well documented, and continues to be spoke about. Keane was United captain during the club's most successful period, helping them win seven Premier League titles, four FA Cups and the Champions League. He would retire within a year of leaving Old Trafford, and wasn't the player he had been in his final season or two, but Keane's departure was a shock at the time.

The Irishman's relationship with Sir Alex Ferguson, which once appeared so strong, was fractured and has never been repaired. At the time, it was reported that Keane left the club because he criticised the performance of some of his teammates during an appearance on MUTV.

"Just because you are paid £120,000-a-week and play well for 20 minutes against Tottenham, you think you are a superstar," Keane said about Rio Ferdinand.

"The younger players have been let down by some of the more experienced players. They are just not leading. There is a shortage of characters in this team. It seems to be in this club that you have to play badly to be rewarded. Maybe that is what I should do when I come back. Play badly."

Ferguson brought up Keane's comments in a team meeting. In the version of events presented by the former United manager, Keane was explosive in his criticism of Ferguson and his teammates.

"It was unbelievable. He slaughtered everyone. Darren Fletcher got it, Alan Smith. Van der Sar. Roy was taking them all down. I told him 'What you did in that interview was a disgrace, a joke. Criticising your team-mates and wanting that to go out'.... What I noticed about him that day as I was arguing with him was that his eyes started to narrow, almost to wee black beads. It was frightening to watch. And I'm from Glasgow." 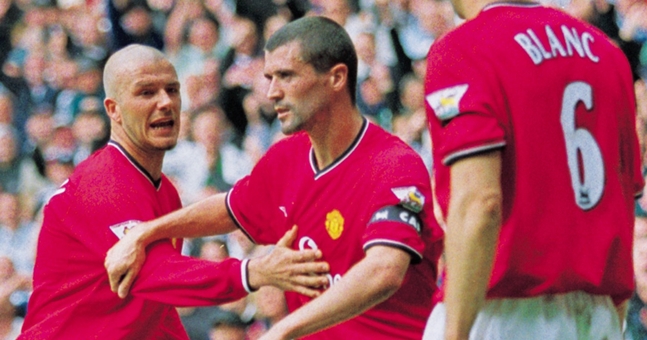 In his second autobiography, Keane said Ferguson exaggerated aspects of the their falling out, and that the recording of him criticising his teammates was a lot tamer than it was portrayed. However, he did admit challenging his manager.

"You as well gaffer. We need f***ing more from you. We need a bit more, gaffer. We're slipping behind other teams."

END_OF_DOCUMENT_TOKEN_TO_BE_REPLACED

Keane has been speaking about the incident again, at an event in Limerick to raise funds for a football club, which was covered by the Limerick Leader newspaper. The Republic of Ireland assistant manager said the "only reason" he left United was because he appealed a fine imposed for his comments on MUTV.

"The only reason I ended up leaving Man United was I appealed a £5,000 fine. If I hadn’t appealed the fine I wouldn't have left Man United - don't be brainwashed by the propaganda and lies. It is peanuts, you get fined that for being late for training at United. I appealed because I felt I shouldn't have been fined for speaking about a match on the club station."

Keane admitted he crossed the line at times, but has no regrets as he felt he always had the best interests of the club at heart.

“Have I stepped out of line? Damn right I have. Man United fined me about half a million pounds over my career but that is because I was sent off and I always held my hands up. Ironically when I appealed a £5,000 fine that's when I left the club. I wished they played this video, it is propaganda, 'we had to destroy it'. How do you even destroy a video? I left with my head held up high, I was fine with my actions, I always felt my intentions were to do the best for Man United."

popular
Gary Neville cautiously optimistic about England, but Roy Keane sums it up perfectly
Comparing the training gear of the Kerry 1980s team to a modern day outfit
Only old-school fans will get 20/20 in this 1990s footballers quiz | Part 2
The SportsJOE 12 o'clock quiz | Day 370
"For me, there is no comparison between Con O'Callaghan and David Clifford"
Danny Murphy's comments on BBC tonight prove some folks will never learn
QUIZ: How much do you know about Dutch football?
You may also like
1 week ago
Owen Hargreaves on what made Vidic and Ferdinand's partnership so special
1 week ago
Man Utd agree personal terms for Jadon Sancho
2 weeks ago
David De Gea appears to aim dig at Man Utd as Sergio Romero finally leaves
3 weeks ago
Carragher trolls Gary Neville after Man Utd Europa League defeat
3 weeks ago
Full Man United playing ratings as De Gea carries can for Solskjaer
4 weeks ago
Marcus Rashford causes wobbles among United fans with latest interview
Next Page