Nottingham Forest assistant manager Roy Keane was booked during the club's 2-0 loss to Stoke on Saturday.

Oghenekaro Etebo and Benik Afobe scored either side of half-time to give the Potters a vital win while Forest suffered just their third defeat under Martin O'Neill.

Roy Keane received a yellow card this afternoon at the bet365 Stadium... #nffc

Keane spent five years with O'Neill with the Republic of Ireland before they departed late last year and O'Neill was keen to get the former Manchester United captain back on board in their return to the former club.

"I would dearly like him to join us, this has happened very quickly and he has a number of things to sort out himself and we’ve had some discussions here," O'Neill said.

"I’d like him to join if that’s the case, there’s a spot open for him and I’m hoping that may happen. It may not, he has a number of things obviously to consider himself, personally and professionally, but he will keep me informed but I would dearly like him to join up." 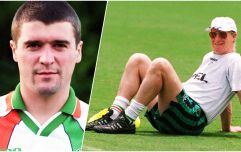 END_OF_DOCUMENT_TOKEN_TO_BE_REPLACED

O'Neill admitted that Keane could be difficult to handle at times with his public falling out with both Jon Walters and Harry Arter in Ireland camp serving as high profile examples of his volatile nature but that his temperament is ultimately what makes him special according to O'Neill.


popular
Roy Keane on the experience of being managed by Jack Charlton at USA 94
The SportsJOE 12 o'clock quiz | Jack Charlton special (Day 112)
"Never back against the Irish" - How the BBC covered our USA 94 win over Italy
An Ireland XI of players who didn't get the recognition they deserved
WATCH: Amazing scenes at Aviva Stadium as Jack Charlton is given standing ovation
'ROG was the kingpin... he just wanted to win, win, win' - Barry Murphy
When the President interrupted a Euro 88 pint between Charlton and Dunphy