"Nice chat, dad!" - Roy Keane on fiercest row he ever had with Alex Ferguson

It has been 17 years since Roy Keane left Manchester United, and Alex Ferguson, but not all the old bridges have been mended.

The former Ireland captain is a hugely popular figure at Old Trafford and his recent punditry outing for Sky Sports saw United players past and present making a beeline to him for a hug, or to share a few words.

END_OF_DOCUMENT_TOKEN_TO_BE_REPLACED

Keane said he could only ever recall 'four or five times' when Ferguson pulled him aside for an extra word, or to briefly consult on tactics or players. Other than that it was a case of 'just go out there and get on with it'. While former United captains like Bryan Robson or Steve Bruce may have went for a cup of tea after the odd training session, Keane stated it was all very cordial, and formal between the pair when he had the arm-band.

Keane recalled that most of the toughest words Ferguson ever had for him were shared behind a closed door, at his office, and never in front of the squad. He commented:

"The times I had run-ins with Ferguson, it was when he pulled me in about my drinking. He'd say to me, 'You were out until 3 or 4am'. I'd say I was. I never ever lied to him about that."

END_OF_DOCUMENT_TOKEN_TO_BE_REPLACED

Neville pointed out how Ferguson had eradicated United of their 'drinking culture' after he took over, in 1986, but still allowed his players to have the odd night out. Keane interjected.

"He couldn't understand, sometimes, that I'd go out for a few drinks on a Sunday night," Keane added. "I'd tell him that it was my way of relaxing or switching off. But I will put in a performance on Wednesday. It's not like the team will have to carry me. I'll perform for you." 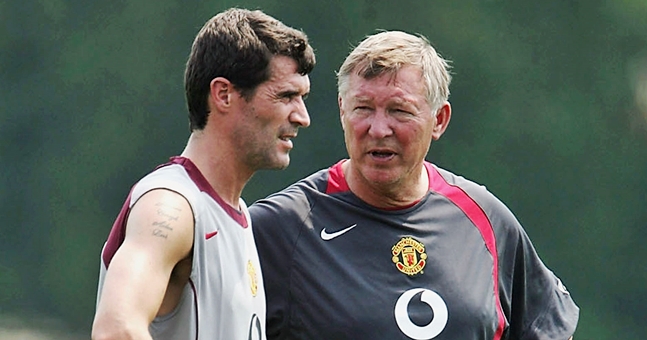 Roy Keane and Alex Ferguson stand together during a Manchester United training session in Philadelphia, in 2004. (Photo by Phil Cole/Getty Images)

END_OF_DOCUMENT_TOKEN_TO_BE_REPLACED

Roy Keane was in top form during the Soccerbox show, as him and Gary Neville sat in a small screening room and watched back clips from his 12 and a half seasons with Manchester United.

Asked by Neville if any Alex Ferguson dressing room rants - often referred to as 'the hair-dyer' - to him still stood out, Keane recalled one private meeting that almost culminated in him leaving United. The flare-up occurred during the 1997/98 season as Keane was rehabbing from a cruciate ligament injury he sustained against Leeds United.

"I never remember getting the hair-dryer for anything I ever did in a match," said Keane. "If I ever did, it would be for off-field stuff.

"They were all maybe in his office - private stuff. I remember one of the worst ones. I was supposed to do something, like a function. I might have been out with my cruciate, at the time.

"The team were away, and he asked me to go do an appearance somewhere in Manchester. Present some trophies somewhere. And I remember, I couldn't find the place where I was supposed to do it. Genuinely. But he went mad at me, on the Monday. A couple of days later.

"It got to a point were we literally discussed me leaving the club over it. 'I said fine, no problem'... Nice chat, dad!"

Keane, of course, did not leave United that season. His first season as United captain had been ended by that cruciate injury, in September 1997. The Cork native returned for 1998/99 and was an inspiration as United won the treble of league, FA Cup and European Cup.

Ferguson would later write of one of Keane's best ever performances in that treble season - an away win over a formidable Juventus side. Keane was booked in that semi-final, in the Champions League, but scored a goal that sparked a comeback and paid no heed to the fact he would miss the final with suspension.

"It was the most emphatic display of selflessness I have seen on a football field," Ferguson wrote in his auto-biography. "Pounding over every blade of grass, competing as if he would rather die of exhaustion than lose, he inspired all around him. I felt it was an honour to be associated with such a player."