Anfield supporters held a minute of applause for the Man United striker.

Cristiano Ronaldo's family have thanked Liverpool fans after they showed support for the striker following the death of his baby son.

The applause happened during the seventh minute of the match, as a nod to the striker's shirt number.

7-minutes in, Liverpool and Man United fans show their support for Cristiano Ronaldo and his family. ❤️ pic.twitter.com/5TCxj5oxKO 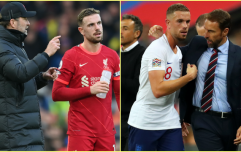 END_OF_DOCUMENT_TOKEN_TO_BE_REPLACED

It comes a day after Ronaldo, 37, and his wife, Georgina Rodríguez, 28, announced the tragic death of their son, who died during childbirth.

The couple were expecting twins with Rodríguez giving birth to a baby girl, who survived.

Ronaldo's sister Elma posted a video of Liverpool fans on her Instagram and wrote: “Thank you for this Liverpool. We will never forget what you did today.”

Posting her own clip of the moment, Ronaldo's other sister Katia said it was “way beyond football”.

END_OF_DOCUMENT_TOKEN_TO_BE_REPLACED

Announcing the death of his son on Monday evening, Ronaldo wrote on Instagram: “It is with our deepest sadness that we have to announce that our baby boy has passed away. It is the greatest pain that any parents can feel. Only the birth of our baby girl gives us the strength to live this moment with some hope and happiness.

“We would like to thank the doctors and nurses for all their expert care and support. We are all devastated at this loss and we kindly ask for privacy at this very difficult time. Our baby boy, you are our angel. We will always love you.”