Ronaldo and Gavin Bazunu give their take on penalty save moment

It was a special moment for the 19-year-old, but Cristiano Ronaldo had the last laugh(s).

Gavin Bazunu was the calmest Irish player, or person, at Estádio Algarve as Cristiano Ronaldo stood over what would be a record-breaking penalty.

The Portsmouth goalkeeper, on loan from Manchester City, will have been gutted that his under-hit pass to Jeff Hendrick had led to the penalty being awarded in the first place. He knew he had put his team in a hole and he had almost four minutes to stew on it.

END_OF_DOCUMENT_TOKEN_TO_BE_REPLACED

Referee Matej Jug, after hearing from both sets of animated players, then went off to the pitch-side monitor to try figure out if Hendrick or Bruno Fernandes had touched the ball first. Hendrick may have, but the evidence was not crystal clear, so the Slovenian referee stuck with his on-field decision.

It was up to Bazunu to save the penalty, save his team from going 1-0 down to the world No.8 side, and deny Ronaldo what would be a record-setting 110th international goal.

That class Bazunu save from Ronaldo 🇮🇪pic.twitter.com/lz6XZ4pLuT

END_OF_DOCUMENT_TOKEN_TO_BE_REPLACED

Bazunu repelled most efforts that were sent his way, most of them calmly and with little fuss. One Fernandes shot had him scrambling and he produced another good stop to parry away a Ronaldo free.

Other than that, it was all hands on deck, but clear sighters at his goal were being denied. And so it played out, until the 89th minute.

Ronaldo rose highest to head home an equaliser after a cross from the right wing. Six minutes later, he did it again. From a winning position, Ireland had lost 2-1.

Following the game, a disappointed but reflective Bazunu told RTÉ, "We probably deserved a bit more but that's how football goes sometimes." On that penalty save, the former Shamrock Rovers goalkeeper said:

"My first emotion was disappointment at giving it away. It was my fault. But I just tried to stay calm. There was a lot of time between the penalty being awarded and it being taken. So I tried to stay relaxed and trust my gut."

"I was trying not to think about [the record] too much," he added. "I was just focusing on the clips I had watched, what I thought he was going to do and sticking to the side I was going to." 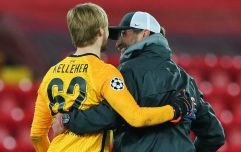 END_OF_DOCUMENT_TOKEN_TO_BE_REPLACED

As for Ronaldo, who walked off the hero and with the world record [now at 111 goals] firmly he, the victory afforded him some reflective grace.

Tony O'Donoghue was going to press for his take on getting that record, but Ronaldo was off to the next interview, with his adoring fans cheering him on nearby.

Thumbs up, and off to enjoy the win.

For Ireland, at least they have a rapid chance to chase another win when, on Saturday, Azerbaijan come to Dublin for the next World Cup qualifier.