Ronaldinho was extremely close to joining United in 2003

In 2003 Ronaldinho signed for Barcelona, his arrival the catalyst for the glorious era that followed for the club.

Things could, however, have turned out very differently, with Ronaldinho coming extremely close to joining Manchester United instead. 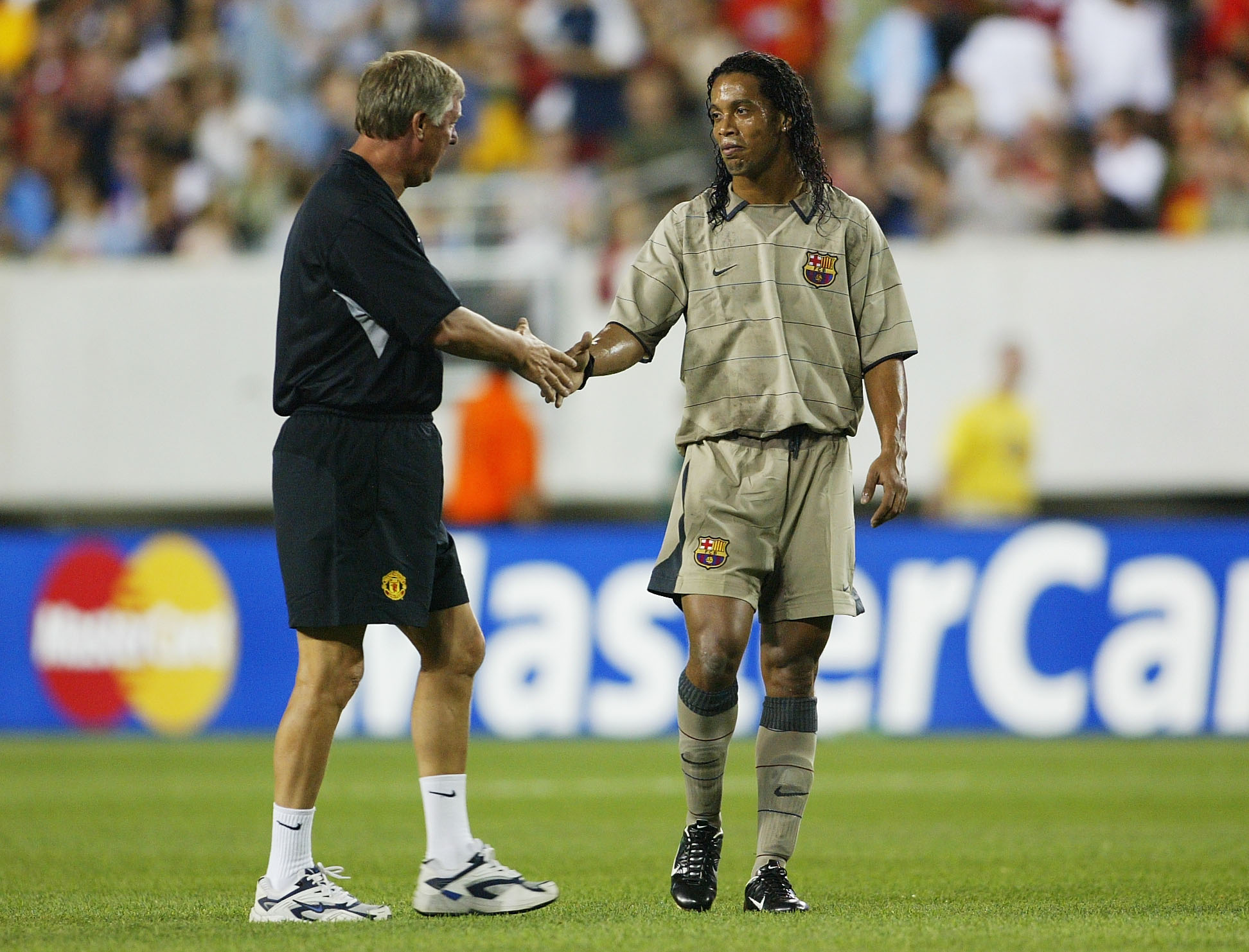 Ronaldinho meets Sir Alex Ferguson weeks after he backed out of a move to United to join Barcelona. (Credit: Getty Images)

That summer was one of change for United, who had just been crowned champions of England for the 15th time. As they clinched the league title in May, however, it was already becoming clear that David Beckham's time at the club was drawing to a close.

END_OF_DOCUMENT_TOKEN_TO_BE_REPLACED

Persistent rumours of a falling out with Ferguson swirled, and Beckham - despite his status as a key player and his immense commercial worth to the club - was being strongly linked with a move to Spain.

Beckham had two realistic options: Barcelona or Real Madrid. Madrid, having already signed Luis Figo, Zinedine Zidane and Ronaldo, were in the midst of their Galacticos era and would eventually win the race for the England captain, but a deal with Barca was also a genuine possibility.

Barca held their presidential elections that summer, with Joan Laporta one of the candidates. If elected, he promised to sign one of three players: Beckham, Ronaldinho or Thierry Henry.

END_OF_DOCUMENT_TOKEN_TO_BE_REPLACED

Speaking to MARCA in 2017, Laporta said that he had struck a deal in principle with United on the condition he won the presidency and was able to reach an agreement over personal terms with Beckham's representatives.

"We met at Heathrow Airport and signed a document which said that they [United] would sell him to us if we struck an agreement with the agent," Laporta said.

"However, we didn't manage to do that. We went to Nice and stayed with him and he said he would think about it."

Madrid announced a £25m-deal for Beckham in the middle of June, completed on July 1. With Beckham departing, United identified Ronaldinho, then of Paris Saint-Germain, as a replacement.

Ferguson was confident of signing Ronaldinho

Ferguson, writing in his autobiography, was confident of concluding a deal.

"I had agreed a deal to bring him to Old Trafford. Carlos Quieroz [United's assistant manager at the time] was there and would vouch for that.

"The attempt to buy Ronaldinho reflected the fact that United have always sported talismanic players. I was always hunting for that kind of talent. My line of reasoning was, 'We're getting £25m for Beckham, and we're getting Ronaldinho for £19m. For God's sake, wake up!'. It was a steal."

After missing out on Beckham, Barca had switched focus to making a move of their own for Ronaldinho. Laporta's bid to become club president was backed by Sandro Rosell, who would serve as vice-president if they won.

Before any United move for Ronaldinho had been made, Rosell contacted the player and asked if he would join the club should Laporta become president. Ronaldinho agreed.

Unaware of this, United pressed on in their attempts to sign him. Ronaldinho, Ferguson recalled, had said yes to the move. This claim is supported by his Brazilian teammate, Kleberson, who did end up joining United that summer after Ronaldinho assured him he would be joining him in Manchester.

"When United’s interest in me was confirmed, I was with the national team in France for the FIFA Confederations Cup," he told FourFourTwo.

"I can remember it clearly: I was with Ronaldinho and his brother/agent, Assis. Ronaldinho said, "They want to sign both of us." I said, "OK, let’s go, then!"

"I was so glad that he would be coming with me."

With a transfer to United close to being finalised, Ronaldinho took a call from Rosell, who informed him that Laporta would win the Barca election. This forced a change of heart. Keeping his original promise, Ronaldinho pulled the plug on his move to England and sealed his switch to the Camp Nou within days.

Ronaldinho on rejecting United for Barca

"Everything was beautiful and happened fast," Ronaldinho told El Enganche in 2014. "A great friend of mine was about to become a part of the Barcelona board: Sandro Rosell.

"Before the offers came, he had asked me if I would play in Barcelona when they won the election and became the presidents, and I had said 'Yes.'

"I was almost on my way to Manchester United and only the details needed to be put onto that deal. But in the last minute Rosell called me to tell me they would win the election. That made everything happen fast.

"I wanted to play in Barcelona. When I signed, I didn't feel pressure, I felt joy. I had the chance that all of the players wanted, to play in a great club like Barcelona.

"I had the opportunity to follow in the footsteps of my idols. I was proud to play where Romario, Ronaldo and Rivaldo had played and I had the chance to be Barcelona's new 'R.' I loved that."

Ronaldinho would establish himself as the best player in the world at Barca, winning the Ballon d'Or in 2005 and helping the club to the Champions League the following year.

Though United missed out, they were able to sign a teenage Cristiano Ronaldo later that summer after his dazzling display against them in a preseason friendly for Sporting in Lisbon. Adding Wayne Rooney a year later, Ferguson was able to build arguably his greatest ever United side around those two players.