Frank Lampard will reportedly take over at Chelsea after the club confirmed on Sunday that manager Maurizio Sarri will depart the club to leave for Juventus.

Sarri leaves after just one season at Stamford Bridge where he won the Europa League and where he also helped the club to a third placed finish in the Premier League.

Both Chelsea and Juventus have reached an agreement for the early termination of Sarri’s contract with Chelsea which had two years left to run and is ending at his request.

‘In talks we had following the Europa League final, Maurizio made it clear how strongly he desired to return to his native country, explaining that his reasons for wanting to return to work in Italy were significant.

'He also believed it important to be nearer his family, and for the well-being of his elderly parents he felt he needed to live closer to them at this point.' 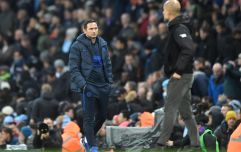 END_OF_DOCUMENT_TOKEN_TO_BE_REPLACED

Lampard, who spent 13 seasons at Chelsea where he won three Premier League titles, guided Derby County to the Championship Play-off final last season where the club ultimately lost to Aston Villa, however, he has already been installed as the bookies favourite to succeed Sarri at the club with The Sunday Times reporting that owner Roman Abramovich called him personally last week to tell him that he would have at least two transfer windows to prove that he deserves the job.

It is understood that Sarri will look to bring midfielder Jorginho with him to Turin while Lampard, if he takes over, will have to endure a two-window transfer ban that would mean he would not be able to sign any new players until the summer of 2020.