Roman Abramovich's time at Chelsea has shown he isn't always the most patient with a manager when the club goes through a bad patch.

Several names have been put forward as potential replacements for Mourinho, but it appears that Abramovich is running out of options. 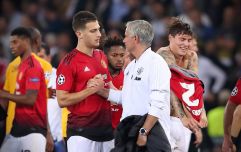 END_OF_DOCUMENT_TOKEN_TO_BE_REPLACED

Following reports that Carlo Ancelotti would be considered for a second stint at the club, another of the Blues' former managers also appears to be one of the candidates.

Spanish publication Fichajes reports that Andre Villas-Boas has made it onto Abramovich's shortlist.

This comes after Chelsea were understood to have shelled out £13.2m in compensation to release Villas-Boas from his Porto contract in 2011, the highest fee of its kind. He lasted less than a year before he was sacked.

Currently in charge at Zenit St Petersburg, Villas-Boas will leave Russia at the end of the season after rejecting the club's offer of a contract extension.